By David Ljunggren OTTAWA (Reuters) - Canada on Thursday shrugged off U.S. President Donald Trump's criticism that talks to modernize NAFTA were moving too slowly and made clear it had to keep negotiating as long as there was a chance of success 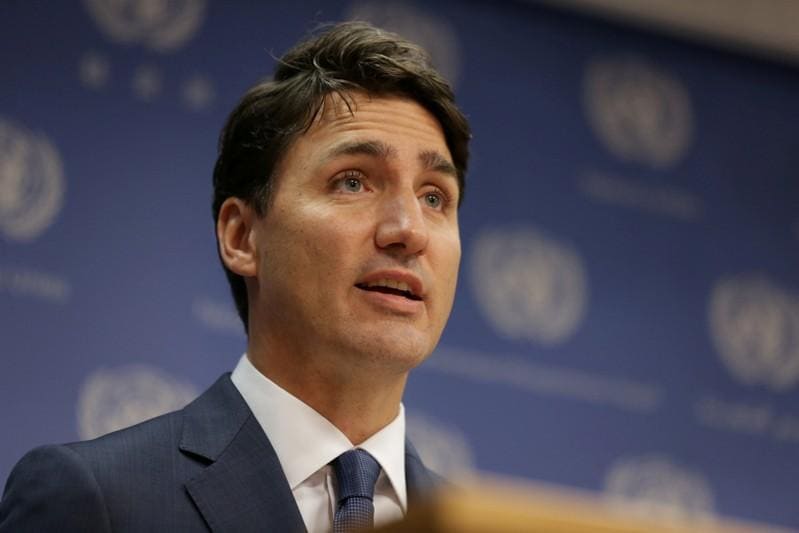 OTTAWA (Reuters) - Canada on Thursday shrugged off U.S. President Donald Trump's criticism that talks to modernize NAFTA were moving too slowly and made clear it had to keep negotiating as long as there was a chance of success.

The prospects for a quick deal to update the North American Free Trade Agreement appeared to dim on Wednesday after Trump blasted Canada's stance and threatened to impose tariffs on cars imported from Canada.

"The Americans are finding that the negotiations are tough because Canadians are tough negotiators, as we should be," Trudeau told reporters on the way into a regular weekly cabinet meeting in Ottawa.

"But a good fair deal is still very possible. We won't sign a bad deal for Canadians," he added, saying his office had not requested a private meeting with Trump. He declined to answer when asked whether Trump had lied.

The United States has imposed a Sept. 30 deadline for Canada to agree to the text of a new NAFTA. The 1994 deal underpins $1.2 trillion in annual trade between Canada, Mexico and the United States.

Canada, which sends 75 percent of its goods exports to the United States, is vulnerable. The Canadian dollar weakened to its lowest in more than two weeks against the U.S. greenback early on Thursday before recovering slightly.

But insiders - who requested anonymity given the sensitivity of the situation - say there is no alternative for Canada but to keep trying to settle the differences between the two nations and ignore mounting pressure from the U.S. administration.

"Plan A, B, C and D is NAFTA. If the government listened to everything the Trump team said about the negotiations we'd never get anything done," said one source with direct knowledge of Ottawa's stance.

Washington has already wrapped up a deal with Mexico, the third NAFTA member, and is due to publish the text on Friday.

Although U.S. lawmakers said they expected that text to completely exclude Canada, U.S. Trade Representative Robert Lighthizer has made clear Ottawa could sign on later.

Canadian officials say there is no enormous rush to get an agreement since any move to recast NAFTA as a bilateral deal would have to be approved by the U.S. Congress. Some U.S. legislators - echoing comments by business leaders - say the agreement must stay a three-nation affair.

Rep Brian Higgins, a Democrat whose district borders Canada in upstate New York, attended a briefing by Lighthizer and afterwards attacked the plan to proceed with Mexico.

"(Lighthizer) indicated there was no deal with Canada, but the hope is that Canada will come in later on, which I think is totally unacceptable. This is an abject failure," Higgins told reporters.

One Canadian government source said there was a significant chance that Congress would balk at any move to turn NAFTA into a bilateral pact.

"Think of the disruption that changing NAFTA would cause. Is Congress really going to back that?" said a second Canadian government source, citing a study showing many hundreds of thousands of U.S. jobs could be at stake.

Yet people close to Trudeau acknowledge that it is quite possible Trump might slap tariffs on Canadian autos, which would have major consequences.

That said, insiders have consistently played down the idea that U.S. pressure could be politically damaging for Trudeau's ruling Liberals, in the short term at least, predicting opposition politicians would be forced to back the government at a time of crisis.

Trump also appeared to attack Canadian Foreign Minister Chrystia Freeland on Wednesday, saying the U.S. team did not like Canada's representative at the talks.

Canadian government ministers lined up to praise Freeland before the cabinet meeting on Thursday.

"Minister Freeland is doing an outstanding job at a very difficult task on behalf of all Canadians," said Indigenous Services Minister Jane Philpott.

(Additional reporting by David Lawder at the United Nations; Editing by Chizu Nomiyama and Paul Simao)