By Karen Freifeld VANCOUVER (Reuters) - There is no evidence Canadian border officials or police acted improperly when Huawei Chief Financial Officer Meng Wanzhou was detained and arrested at Vancouver's airport nearly 10 months ago, the Attorney General of Canada said in a filing released on Monday. The filing was made public as Meng and her lawyers were in British Columbia Supreme Court in Vancouver arguing for additional disclosure surrounding the arrest 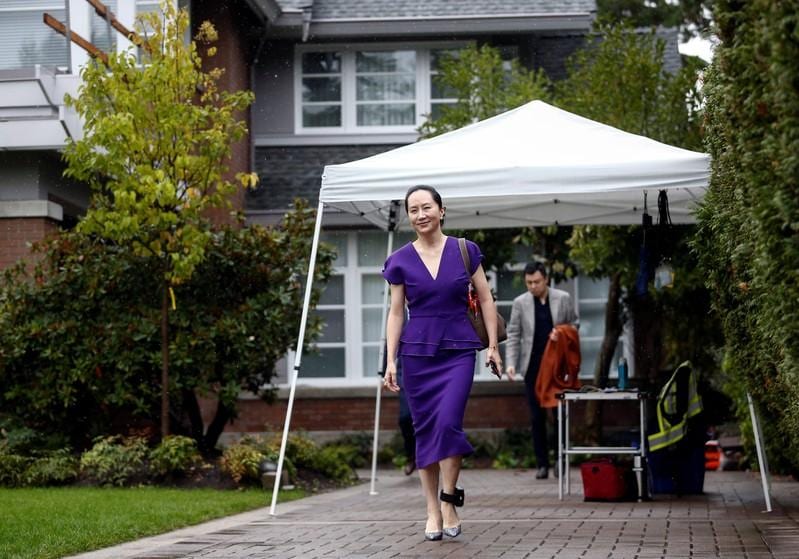 VANCOUVER (Reuters) - There is no evidence Canadian border officials or police acted improperly when Huawei Chief Financial Officer Meng Wanzhou was detained and arrested at Vancouver's airport nearly 10 months ago, the Attorney General of Canada said in a filing released on Monday.

The filing was made public as Meng and her lawyers were in British Columbia Supreme Court in Vancouver arguing for additional disclosure surrounding the arrest. The defence claims Meng was unlawfully searched and questioned under the ruse of an immigration check and wants to halt extradition proceedings.

An extradition hearing itself is not scheduled to start until January, but the two sides are already in court.

At Monday's hearing before Justice Heather Holmes of the British Columbia Supreme Court, Meng lawyer Richard Peck, said the Canadian border agency and police delayed implementing Meng’s rights, and gave the border agency an opportunity to interrogate her, with plans to share the information with the Canadian police and the Federal Bureau of Investigation (FBI).

"We refer to this as a 'covert criminal investigation' under the pretext of an admissibility examination for immigration purposes," Peck said.

The Attorney General of Canada said in its filing that the border officers acted pursuant to "lawful authority to determine whether the applicant and her goods were admissible to Canada."

Meng arrived at the Vancouver court on Monday in a burnt orange coat and wearing an electronic monitor on her left ankle above silver glittering shoes. She sat in the well of the courtroom next to an interpreter, wearing a long purple dress and with her hair pulled back with a black velvet bow.

Meng's lawyers have said in court papers that she was unlawfully detained, searched and questioned for over three hours after she landed on a flight from Hong Kong. Under the ruse of an immigration check, they claim Canadian officials collected evidence for U.S. authorities.

Extradition proceedings against Meng should be halted if officials abused the process, the lawyers say. Besides accusations of misconduct related to her detention, they argue the United States is using Meng for economic and political gain, noting that after her arrest, U.S. President Donald Trump said he would intervene if it would help close a trade deal. Vancouver lawyer Gary Botting, who has seen a video of Meng being detained at the airport, said immigration officials came across as "Keystone Cops." "There are real questions about whether her rights were violated," said Botting, who briefed Meng's defence team on Canada's extradition law after her arrest but is no longer involved with the case.