By Kelsey Johnson OTTAWA (Reuters) - Canada's minority Liberal government kicked off the ratification process for a new continental trade pact on Monday and urged opposition lawmakers to formally approve the deal as quickly as possible. 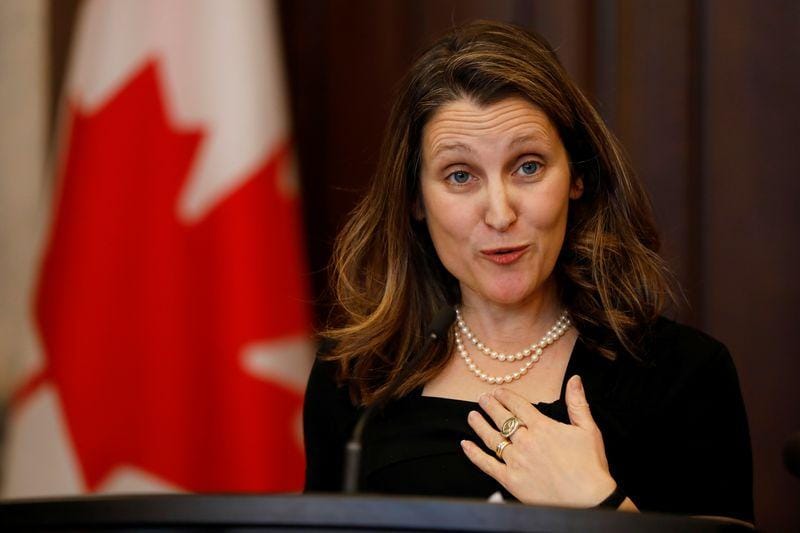 OTTAWA (Reuters) - Canada's minority Liberal government kicked off the ratification process for a new continental trade pact on Monday and urged opposition lawmakers to formally approve the deal as quickly as possible.

Canada is the only country still to ratify the trilateral United States-Mexico-Canada Agreement (USMCA), which updates the 25-year-old North American Free Trade Agreement.

Deputy Prime Minister Chrystia Freeland, who led Canada's negotiating team, urged lawmakers to set partisanship aside. The Liberals do not control the House of Commons and must rely on opposition legislators to govern.

"The ball is in their court," Freeland told reporters on Monday after formally giving notice the government would be introducing the necessary legislation on Wednesday.

"I am calling on all members of Parliament to support the agreement and to support its entry into force with out undue delay." she said.

U.S. President Donald Trump is expected to sign the new trade deal into law on Wednesday. Trump made the renegotiation of NAFTA a key element of his 2016 presidential election campaign.

Canada's main opposition Conservative Party has expressed a determination to examine what it calls potentially worrying aspects of the deal, but also says it has no intention of dragging the process out.

Business and industry groups want the Trudeau government to ratify the trade pact as quickly as possible to alleviate economic uncertainty. Free trade is critical to the economies of Canada and Mexico, which both send around 75% of goods to their much larger neighbour.

"It is crucial for businesses that this agreement is ratified in an expeditious manner," the Canadian Chamber of Commerce said in a statement.

(Reporting by Kelsey Johnson in Ottawa; Editing by David Ljunggren and Marguerita Choy)