By Jonathan Stempel, Trevor Hunnicutt and Jennifer Ablan (Reuters) - Warren Buffett on Saturday appeared to fault U.S. President Donald Trump for taking too much credit for the nation's economic growth, while acknowledging that market conditions are making it tough for his Berkshire Hathaway Inc to find more big companies to buy. Buffett lamented these states of affairs in his annual letter to Berkshire shareholders. 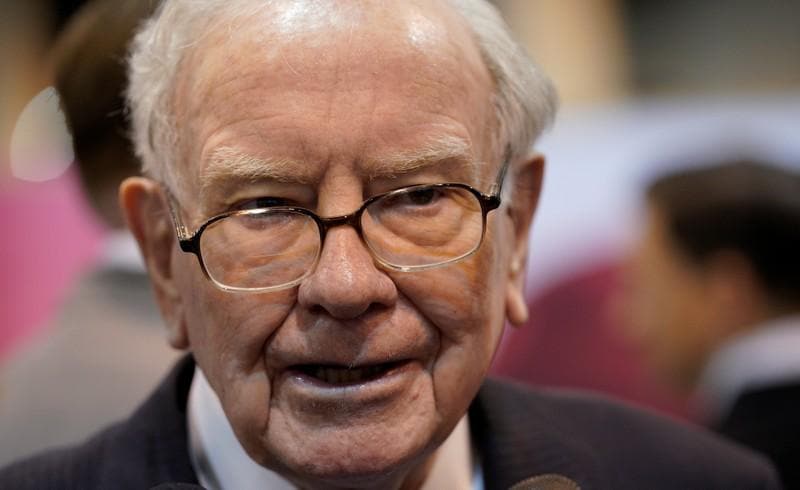 (Reuters) - Warren Buffett on Saturday appeared to fault U.S. President Donald Trump for taking too much credit for the nation's economic growth, while acknowledging that market conditions are making it tough for his Berkshire Hathaway Inc to find more big companies to buy.

Buffett lamented these states of affairs in his annual letter to Berkshire shareholders.

Berkshire said plunging stock prices and a big writedown for its investment in Kraft Heinz Co led to a $25.39 billion fourth-quarter loss. Many of its more than 90 businesses, such as the Geico auto insurer and BNSF railroad, performed well.

Buffett, 88, said Berkshire's success has been in part a product of "the American tailwind" that has enabled the country to enjoy "almost unbelievable prosperity."

He said since he began investing in 1942, the prosperity has been overseen by seven Republican and seven Democratic presidents, and gained in a bipartisan manner, even through times of war and financial crisis.

Buffett, who supported Hillary Clinton in her 2016 White House run, said no one person should do that.

"It is beyond arrogance for American businesses or individuals to boast that they have 'done it alone,'" Buffett wrote.

Buffett, whose company invests in Chinese electric car maker BYD Co, also made a possible oblique criticism of Trump's bragging about U.S. economic performance, including relative to other countries such as China.

Buffett said the United States should 'rejoice' when other countries have bright futures.

"Americans will be both more prosperous and safer if all nations thrive," he wrote. "At Berkshire, we hope to invest significant sums across borders."

Part of the reason Buffett may be looking to invest abroad is that he is struggling to find big investments at home, and does not expect that to change soon.

Berkshire has not make a major acquisition since paying $32.1 billion for aircraft parts maker Precision Castparts in January 2016.

Buffett said the near-term prospects for more acquisitions were "not good," because prices are "sky-high" for businesses that had decent long-term prospects.

While Buffett said the prospect of an "elephant-sized acquisition" causes his heart "to beat faster," the reality was that Berkshire would likely in 2019 use some of its $111.9 billion of cash to buy more stocks.

Berkshire ended 2018 with $172.8 billion of equities, but many of these suffered double-digit price declines in the quarter, including a 30 percent slide in its largest holding, iPhone maker Apple Inc.

Those declines were a major factor in Berkshire's huge quarterly loss, and its 91 percent drop in full-year net income.

U.S. stocks have risen since the end of last year, but the main S&P index has not regained all of the losses suffered in the fourth quarter.

Results also were hurt by a $3.02 billion writedown for intangible assets that Buffett said was "almost entirely" attributable to Kraft Heinz, in which Berkshire owns a 26.7 percent stake.

The packaged food company on Thursday shocked investors when it reported its own $15.4 billion writedown for Kraft, Oscar Mayer and other assets, and said U.S. securities regulators were examining its accounting practices.

While dated Saturday, Buffett's shareholder letter is written well in advance, and did not discuss Kraft Heinz's recent travails or 3G Capital, the Brazilian firm and Buffett business partner that runs the company day-to-day.