Lok Sabha Speaker Sumitra Mahajan on Sunday sought the cooperation of various parties for the smooth functioning of the budget session of Parliament.

Important steps have been taken to remove hurdles: Arvind Subramanian

According to PTI, the benchmark Sensex maintained its early upward trend and was trading over 320 points higher after the Economic Survey said India is likely to clock 7-7.5 percent growth in 2018-19, up from 6.75 percent in the current fiscal.

The 30-share barometer, after scaling a new peak of 36,410.60 points in late morning trade on optimistic buying, succumbed to profit-booking at record levels and gave up a part of the gains.

Indian parents continue to have children until they have a son, reveals Economic Survey

Here is a list of ten key facts revealed in the Economic Survey:

Preliminary analysis of the GST data reveals a 50% increase in no of indirect taxpayers: Economic Survey 2017-18

Supporting agriculture; stabilising GST, and recapitalisation should be focus of economic policy

Economic Survey is a round-up of the year’s activity: Madan Sabnavis

The Economic Survey is nothing but a roundup of everything that has happened in the economy, says Madan Sabnavis, Chief Economist, CARE Ratings. However, the report is gathered at high frequency when it comes out on a quarterly basis. The Economic Survey is a comprehensive document that gives you economic data up to date but this is already known to the public.

The second part of the Survey is the ideology of the Chief Economic Advisor, Arvind Subramanian.  He will give his own view on how he looks at the economy and what should be done. It is prescriptive in nature and may not be followed by government at all. Subramanian may say fiscal prudence should be 3 percent. However, the Finance Minister Arun Jaitley may not take that into account while announcing the Budget. What Subramanian is saying is a theoretical point of view that is provided.

I don’t expect anything from the Economic Survey. We get all the information from government and other sources. The Economic Survey is keeping it all together The Central Statistics Office (CSO) had said GDP of 6.5 percent is expected for the current year. The Survey will maintain that figure and not make any changes to it. We won’t know anything about the future of the economy from the Survey.

In the meanwhile, the BJP Parliamentary Party Executive meeting will take place today at 2.30 pm and another meeting of NDA allies at 3.30 pm, ANI reported

In his short address to a joint sititng of Lok Sabha and Rajya Sabha, Vice-president M Venkaiah Naidu said that the dream of India doesn't belong to one particular party or organisation, and that all parties must work together.

President Kovind ended his joint address highlighting the importance of all parties to work together and the govt's fight against corruption.

Kovind said, "A sustained debate is required on the subject of simultaneous elections and all political parties need to arrive at a consensus on this issue."

Kumbh Mela was included in ‘Intangible Cultural Heritage of Humanity' by UNESCO: Kovind

Govt started Start Up India, Stand Up India and Skill India to help the youth: Kovind

'I hope the Triple Talaq Bill will be passed soon': Kovind | ANI

2.70 Lakh Common Service Centers have been set up across the nation: Kovind

Addressing a joint sitting of both Houses of the Parliament, President Ram Nath Kovind said that the govt is committed to double the farmers' income by 2022.

During his joint address to both Lok Sabha and Rajya Sabha, Kovind highlighted the achievements of the NDA government. He said that the govt approved a bill granting working woman paid maternity leave of 26 weeks.

He also said that India should pay tribute to Mahatma Gandhi on his 150th birth anniversary by making India completely clean.

Speaking to the press outside the Parliament, Prime Minister Narendra Modi said that the current budget will fufill everyone's aspirations.

"India is on a growth path. All credit rating agencies have improved ratings for India," Modi said.

Chief Economic Advisor Arvind Subramanian will present highlights of the Economic Survey 2018 around 1.30 pm today at a press conference at the National Media Centre in the national capital.

The Budget Session of the Parliament will kick-off with President Ram Nath Kovind addressing a joint sitting of the Rajya Sabha and Lok Sabha. Kovind's address will be broadcast live on television as well as on Facebook.

Following a recess after 9 February, Parliament will meet again from 5 March to 6 April. After the recess, she said, there would be 23 sittings and 82 hours when more discussions on the functioning of various ministries were expected.

Economic Survey to be tabled today

The first leg of the session will be between 29 January and 9 February during which the government will present the economic survey on 29 January, followed by the Union Budget on 1 February.

Lok Sabha Speaker Sumitra Mahajan said the House would have eight sittings in the first part of the budget session starting Monday, during which 19 out of a total of 36 hours would be devoted on the discussion on the vote of thanks to the President's address and the Union Budget for 2018-19.

AAP MPs on Monday boycotted President Ram Nath Kovind's address to a joint sitting of the Parliament on the first day of the Budget Session, as a protest against the disqualification of 20 party MLAs, IANS reported.

They were protesting against a sealing drive in Delhi, the Central government's decision of allowing FDI in single-brand retail and the Election Commission's decision to disqualify 20 Delhi AAP MLAs, it added.

Government does not have to do anything radical; just finishing what it has started already would be a very ambitious and fantastic agenda to complete: Arvind Subramanian, Chief Economic Adviser #EconomicSurvey2018 pic.twitter.com/3R14t1CZL6

Important steps have been taken to remove hurdles: Arvind Subramanian

From the very 1st survey onwards we've spoken about the twin balance sheet challenges, under capitalised banks which held back growth for a very long time. This year a series of very important steps are being taken: Arvind Subramanian, Chief Economic Adviser #EconomicSurvey2018 pic.twitter.com/fBnzrB6D2G

Indian exports are much less concentrated by firms: Top 1% of Indian exporters account for 38 percent of exports. Share much greater in other countries: 72, 68, 67, and 55 % in Brazil, Germany, Mexico, & USA, respectively #economicsurvey18 https://t.co/5qf2Hu6Lfx pic.twitter.com/8L2QWv0EGX

According to PTI, the benchmark Sensex maintained its early upward trend and was trading over 320 points higher after the Economic Survey said India is likely to clock 7-7.5 percent growth in 2018-19, up from 6.75 percent in the current fiscal.

The 30-share barometer, after scaling a new peak of 36,410.60 points in late morning trade on optimistic buying, succumbed to profit-booking at record levels and gave up a part of the gains.

Indian parents continue to have children until they have a son, reveals Economic Survey

Here is a list of ten key facts revealed in the Economic Survey: 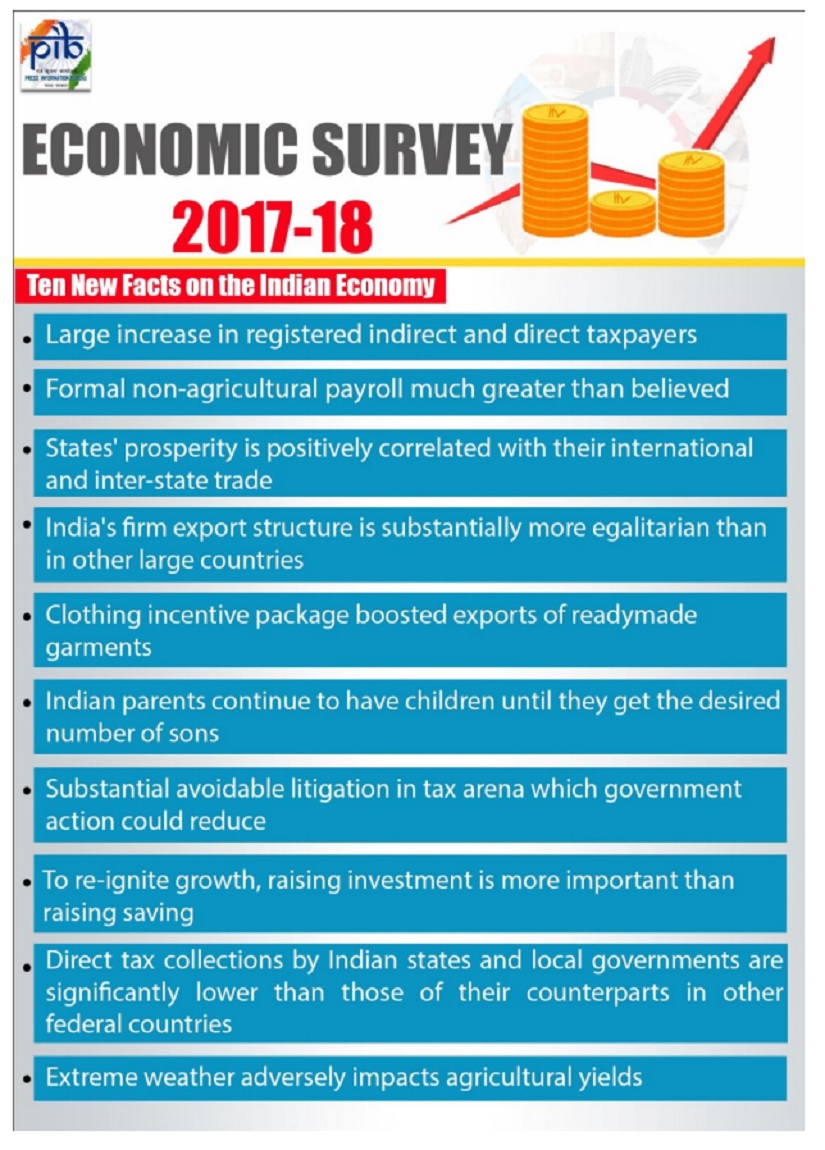 India is expected to regain the world's fastest-growing major economy tag as it is likely to clock 7-7.5 percent growth rate in 2018-19, up from 6.75 percent in the current fiscal, the Economic Survey said on Monday. The economy, said the survey for 2017-18, will grow on the back of major reforms which would be strengthened further in the next financial year. The survey was tabled in Parliament by Finance Minister Arun Jaitley. "A series of major reforms undertaken over the past year will allow real GDP growth to reach 6.75 percent this fiscal and will rise to 7 to 7.5 percent in 2018-19, thereby re-instating India as the world's fastest-growing major economy," it said.

The reform measures undertaken in 2017-18 can be strengthened further in 2018-19, it said. The survey points out that India can be rated as among the best performing economies in the world as the average growth during last three years is around 4 percentage points higher than global growth and nearly 3 percentage points higher than that of emerging market and developing economies.

It said that the GDP growth has averaged 7.3 per cent from 2014-15 to 2017-18, which is the highest among the major economies of the world. "That this growth has been achieved in a milieu of lower inflation, improved current account balance and notable reduction in the fiscal deficit to GDP ratio makes it all the more creditable," it said.

The Economic Survey is an annual publication of the Finance Ministry which reviews the nation’s growth over the last 12 months. It is presented to both houses of the Parliament during the Budget Session and serves as a preview of the policy recommendations that could find a place in the Union Budget that follows it.

President Ram Nath Kovind kicked off the Budget Session of the Parliament on Monday, while addressing both Houses of the Parliament in a joint sitting, highlighted several accomplishments of the government while also championing its welfare schemes and fight against corruption. Kovind also said that he was hopeful that the Triple Talaq Bill would be passed in the Budget Session of Parliament.

"My government has brought the Triple Talaq Bill to safeguard the rights of the Muslim women. And I am hopeful that Parliament will pass the Bill," Kovind said in his address to the joint sitting of the both Houses.

He also said that the government has extended its 'Beti Bachao, Beti Padhao' scheme from 161 districts to 640 districts in the country.

"The government has now amended the Maternity Bill by which the women can get 'paid leave' of up to 26 weeks instead of 12 weeks. Now the women can spend more time with their newborn babies," he added.

Kovind also referred to contributions of Babasaheb Bhimrao Ambedkar and said: "Babasaheb Ambedkar used to say that without economic and social democracy, political democracy is unstable."

Union Budget 2023-24 Expectation: What energy sector hopes to get from finance minister

Here are some of the expectations that the energy sector has from the Union Budget 2023-24.

Union Budget 2023-24 Expectation: What electronics sector wishes for this year

According to ICEA, the tariffs increase the burden on manufacturers and jeopardise the domestic industry