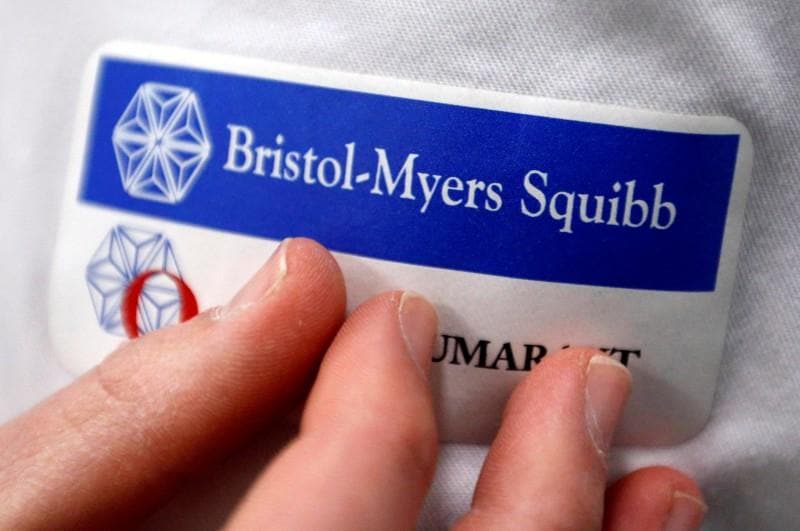 NEW YORK (Reuters) - Bristol-Myers Squibb Co said on Thursday it pulled an application seeking U.S. approval for a combination of its drugs to treat lung cancer, even as it announced better-than-expected fourth-quarter earnings on strong sales of one of those medicines, the immunotherapy Opdivo.

The drugmaker, which announced a planned $74 billion acquisition of biotech Celgene Corp earlier this month, said it withdrew the U.S. application for the combination of Opdivo and its older immunotherapy Yervoy as an initial, or first-line, treatment for advanced lung cancer. Bristol said it needs to collect more data on the benefits of the combination to patients whose cancer cells have a biomarker called tumor mutational burden (TMB) above a certain level.

It made the decision after discussions with the U.S. Food and Drug Administration.

The company's shares were flat at $49.96 midday trading. Analysts suggested that the regulatory setback has been priced into the stock since it released data from a closely-watched lung cancer study in October.

Opdivo, Bristol's most important growth driver, has lost much of its luster as Merck & Co's rival drug Keytruda seized dominance in advanced lung cancer, the most lucrative oncology market.

The withdrawal raises new questions about the company's overall strategy and approach in advanced lung cancer, Credit Suisse analyst Vamil Divan said in a research note. Divan said he did not believe an approval specifically for high-level TMB lung cancer would have had much near-term impact.

Opdivo, which is approved to treat several types of cancer, continues to do well however. Fourth-quarter sales of $1.8 billion easily exceeded the average analyst estimate of $1.47 billion, according to IBES data from Refinitiv.

Last October, the possible approval date for the combination therapy was pushed back by three months to late May, after the company released data showing no difference in survival rates between patients whose tumors had high or low TMB levels.

Bristol said it is still pursuing a lung cancer approval for the combination in patients with a different biomarker called PD-L1 being tested in a separate part of the same study. Opdivo inhibits PD-L1, which cancer cells use to avoid detection from the immune system.

Some analysts and investors have suggested that one reason Bristol may have launched its bid for Celgene was over concerns about Opdivo's ability to compete in the all-important lung cancer market.

The New York-based company reported net earnings of $1.19 billion, or 73 cents a share, compared with a loss of $2.3 billion, or $1.42 a share, last year, when it took a large charge related to U.S. corporate tax reform.

Revenue of $5.97 billion was in line with analyst estimates.