By Helen Reid and Josephine Mason LONDON (Reuters) - Britain's FTSE 100 will only manage modest gains in the second half of the year as the nation's tortuous exit from the European Union hangs over the market, deterring investors from scooping up attractively cheap shares, a Reuters poll found. The top stock index will reach 7,499 points by the end of 2019, rising just 3% from current levels, according to the median forecast from a survey of nearly 30 fund managers and analysts taken in the past two weeks 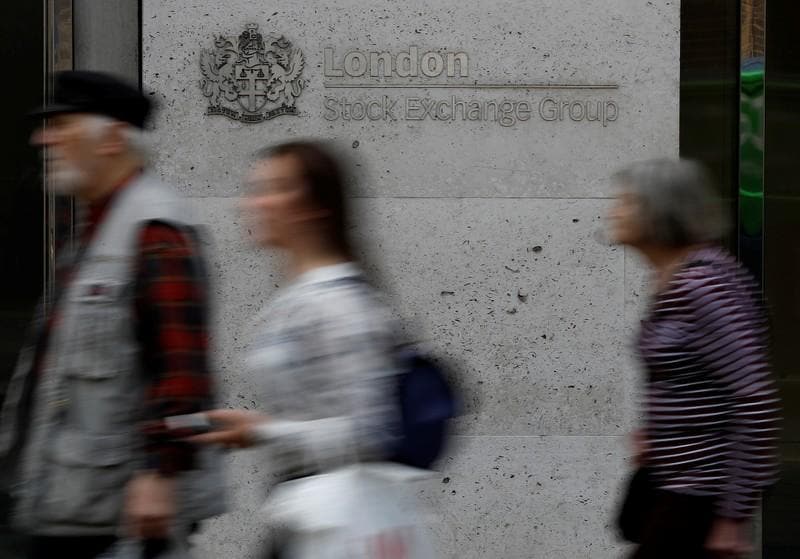 By Helen Reid and Josephine Mason

LONDON (Reuters) - Britain's FTSE 100 will only manage modest gains in the second half of the year as the nation's tortuous exit from the European Union hangs over the market, deterring investors from scooping up attractively cheap shares, a Reuters poll found.

The top stock index will reach 7,499 points by the end of 2019, rising just 3% from current levels, according to the median forecast from a survey of nearly 30 fund managers and analysts taken in the past two weeks.

That would see the FTSE 100 gain 11.5% in total over 2019, higher than predicted in the previous survey, carried out at the end of February during a global stock market rally. That would be the index's best annual performance since 2016.

But a new flare-up in the U.S.-China trade war early this month has dashed investors' hopes of a sustained rebound in markets after a surprisingly strong first quarter.

A breakdown in trade talks and higher tariffs imposed by the U.S. on some Chinese imports have thrust fears of a global economic slowdown back into the spotlight.

For Britain specifically, a further delay of the Brexit date to Oct. 31 and domestic political turmoil have cast clouds over the country's economic prospects.

If they're right, 2020 will be a much slower year with the FTSE 100 advancing just 3% as the British economy digests the divorce - if there are no further delays.

Respondents gave fewer 2020 forecasts for the FTSE 100, reflecting deepening uncertainty over the direction the UK market will take.

Investors have continued to steer clear of UK stocks as Britain narrowly avoided a no-deal Brexit in March and Prime Minister Theresa May ultimately resigned over a failure to create consensus within parliament on a deal with the EU.

The Reuters poll was conducted largely before May announced her resignation.

"Appetite for the UK is unlikely to reverse anytime soon as the Conservative leadership battle could lead to a harder Brexit stance, but the probability of a 'no deal' has not necessarily increased in our view given unchanged Parliament arithmetic," said Barclays head of European equity strategy Emmanuel Cau.

Investors repeatedly point out the UK is home to multinationals with resilient earnings, trading at depressed prices because of the Brexit debacle.

The overall market is also cheap compared with world stocks. The FTSE All-Share index was trading at a near 20% discount to the MSCI World in December - its biggest discount since 2009 - and was last at an 18.4% discount.

"The value likely won't be unlocked until there is some progress on the Brexit negotiations, but that should be a catalyst for international allocators to start putting money back to work which would benefit these stocks enormously," said Rory McPherson, investment director at Psigma Investment Management.

Though valuation is cited as a draw by many, investors are still shunning the region, with a net 28 percent of fund managers underweight UK equities according to Bank of America Merrill Lynch's May fund manager survey.