By Guy Faulconbridge and Kate Holton LONDON (Reuters) - More than 20 shellfish trucks parked on roads near the British parliament and Prime Minister Boris Johnson's Downing Street residence on Monday to protest against post-Brexit bureaucracy that has throttled exports to the European Union. 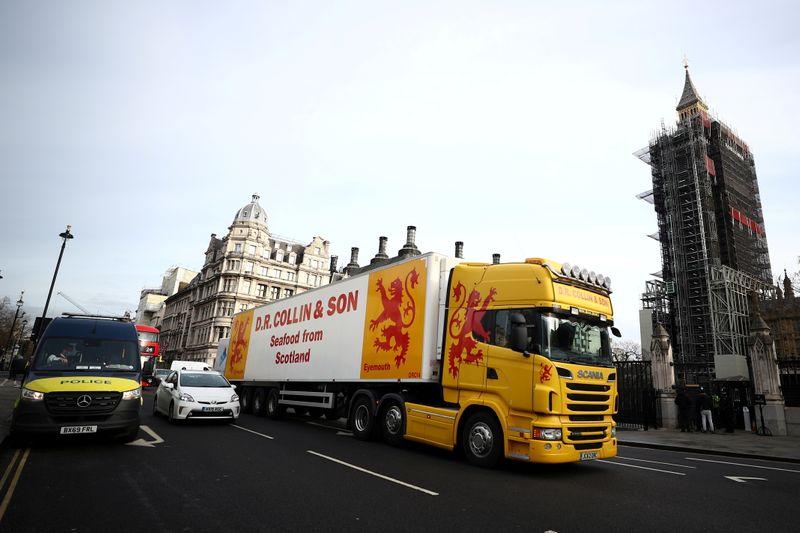 By Guy Faulconbridge and Kate Holton

LONDON (Reuters) - More than 20 shellfish trucks parked on roads near the British parliament and Prime Minister Boris Johnson's Downing Street residence on Monday to protest against post-Brexit bureaucracy that has throttled exports to the European Union.

Many fishermen have been unable to export to the EU since catch certificates, health checks and customs declarations were introduced at the start of this year, delaying their deliveries and prompting European buyers to reject them.

"We strongly feel the system could potentially collapse," said Gary Hodgson, a director of Venture Seafoods, which exports live and processed crabs and lobsters to the EU.

"Prime Minister Boris Johnson needs to be honest with us, with himself and with the British public about the problems for the industry," he told Reuters. One operator, he said, needed 400 pages of export documentation last week to enter Europe.

David Rosie at DR Collin & Son, which employs 200 people, used to send one or two lorries a night to France carrying live crab, lobster and langoustine worth around 150,000 pounds ($203,000). He said he had not exported a single box this year.

Fishermen, he said, "lost their livelihoods in the turn of a clock" when Britain left the EU's orbit on New Year's Eve.

Under a deal reached last month, British trade with the EU remains free of tariffs and quotas. But the creation of a full customs border means goods must be checked and paperwork filled in, shattering express delivery systems.

Using a phrase that has angered many business owners, Johnson described the changes as "teething problems", and said they had been exacerbated by the COVID-19 pandemic.

He said a 23-million-pound ($31.24 million) fund had been created to compensate businesses that "through no fault of their own have experienced bureaucratic delays, difficulties getting their goods through where there is a genuine buyer on the other side of the channel."

Britain's Department for Environment, Food and Rural Affairs (Defra) said that it was looking at financial support, as well as working with the industry and the EU to address documentation issues.

"Our priority is to ensure that goods can continue to flow smoothly to market," a government spokesperson said in an emailed statement.

Fishing alone contributes 0.1% of Britain's GDP if processing is included, but for coastal communities it is a lifeline and a traditional way of life.

The Scotland Food & Drink association says exporters could be losing more than 1 million pounds in sales a day.

Many in coastal communities voted for Brexit but said they had not expected this impact.

Allan Miller, owner of AM Shellfish in Aberdeen, Scotland, said times for his deliveries of live brown crab, lobster and prawns had doubled from 24 hours. This mean lower prices and some of the product did not survive, he said.