By Jamie McGeever BRASILIA (Reuters) - Brazil's Senate confirmed Roberto Campos Neto as central bank governor on Tuesday, after he stressed that controlling inflation and reining in public spending were critical to supporting economic growth. Much work must still be done to secure Brazil's economic recovery, Campos Neto told the Senate's economic committee at his confirmation hearing. He indicated there would be little change, if any, to monetary policy, echoing the central bank's current stance that decisions are based on 'caution, serenity and perseverance.' The Senate approved Campos Neto by a vote of 55 in favour to six opposed, following unanimous confirmation by the economic committee. 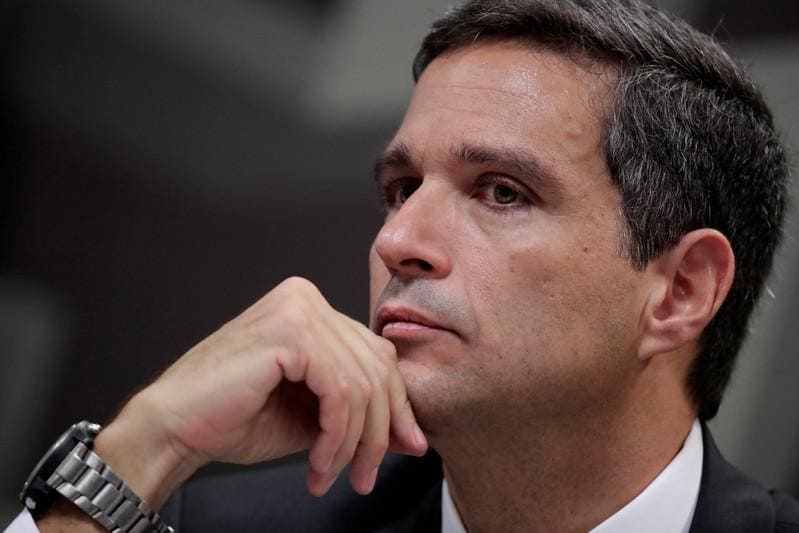 Much work must still be done to secure Brazil's economic recovery, Campos Neto told the Senate's economic committee at his confirmation hearing. He indicated there would be little change, if any, to monetary policy, echoing the central bank's current stance that decisions are based on "caution, serenity and perseverance."

The Senate approved Campos Neto by a vote of 55 in favour to six opposed, following unanimous confirmation by the economic committee.

He will officially assume the role with the signature of President Jair Bolsonaro, likely later this week.

Campos Neto is a former senior executive at Banco Santander Brasil SA. A University of California-trained economist, he has spent his career in banking and market trading and is acutely aware of the impact central bank policy decisions and communications have on markets, analysts say. In his testimony Tuesday, Campos Neto said the country must keep opening up capital markets to foreign and domestic investors, while avoiding inflationary stimulus or state intervention.

His rhetoric largely mirrored that of several advisers to President Jair Bolsonaro, most of whom are pushing for an overhaul of the nation's costly public pension system and a broad series of privatisations.

Campos Neto predicted Brazil's economy would perform better this year than last, thanks in part to reforms the government is promoting.

Brazilian interest rates have been held at a record low 6.50 percent but economic growth has slowed in recent months, weakening what was already a sluggish recovery from the 2015-16 recession.

"While his market knowledge could make him adopt a more forceful stance at some point, the need to build credibility, particularly at the beginning of his tenure, would favour prudence," said a U.S.-based source with first-hand experience of Brazilian markets.

Campos Neto refused to discuss whether Brazil should sell any of its $375 billion reserves, saying it was something that would require more analysis. International FX reserves serve as an insurance policy in times of crisis, he said. "The price of that insurance is much lower now," he said, noting the narrowing of the spread between U.S. and Brazilian interest rates to less than 400 basis points from over 1,200 bps a couple of years ago.