By Jamie McGeever and Dave Graham BRASILIA/MEXICO CITY (Reuters) - The divergence between Latin America's two largest economies, Brazil and Mexico, is widening as the region's most prominent left- and right-wing leaders adopt stridently different fiscal responses to the COVID-19 pandemic. 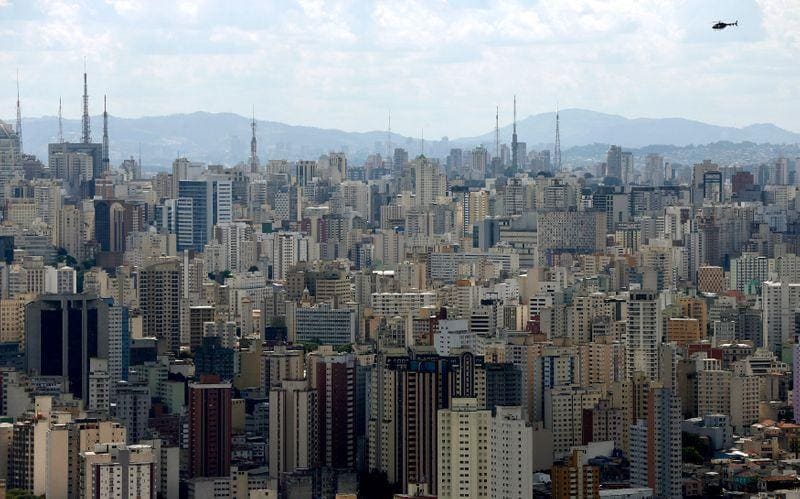 By Jamie McGeever and Dave Graham

Their approaches, however, are not what would be expected - and investors are adapting accordingly.

The right-wing administration of President Jair Bolsonaro - which came to office last year pledging to lower public spending and cut Brazil's debt - has opened the taps and spent billions on unemployment benefits.

Economists at Credit Suisse have estimated that Brazil's spending in response to the epidemic was not only three times higher than the median for emerging market economies, it even exceeded the average of wealthy countries.

The short-term economic impact of this fiscal divergence was reflected in the data. While Brazil's economy shrank by a record 9.7% in the second quarter, Mexico's plunged by a staggering 17.1%.

"The Brazilian economy in 2020 and 2021 (will) be less affected than that of the median of emerging countries," Credit Suisse economists wrote, crediting Bolsonaro's largesse.

In Mexico, the economic panorama certainly looks bleak. The central bank warned last week that the nation of 130 million people could see its output contract by almost 13% this year - the deepest slump since the Great Depression.

Even its rosiest scenario envisages an 8.8% slide this year in the roughly $1.1 trillion economy, before a 5.6% rebound next year.

By contrast, economists have been revising upwards their more bearish forecasts for Brazil, amid signs the economy is picking up in the third quarter following Bolsonaro's calls for lockdowns to be scrapped.

A central bank survey of economists now predicts a contraction of 5.3% on average this year. The government says even that is too pessimistic and is forecasting a 4.7% decline - which would still be the biggest since records began in 1900.

"Mexican bonds could outperform provided there isn't speculation about a possible downgrade to Mexico's credit rating," said Gabriela Siller, an economist at bank Banco BASE. In Brazil, she said, political turbulence was weighing on the performance of sovereign debt.

While Bolsonaro's government has been roiled by corruption scandals and rifts with Congress, his high spending has brought brightening political fortunes. Although Brazil is the world's second-biggest COVID-19 hot spot, with over 120,000 deaths, Bolsonaro's approval ratings have recovered.

Political analysts say that is largely down to a 600 reais ($110) monthly stipend transferred directly into the pockets of up to 85 million of Brazil's poorest people.

A Datafolha poll last month found that 37% of those surveyed viewed his government as great or good, compared with 32% in June, while his rejection rate dropped 10 points to 34% who see his government as bad or terrible.

Crucially, much of the rise in popularity came in Northeast Brazil - a poor region and a bastion of the left-leaning Workers Party - which could be decisive in Bolsonaro's 2022 reelection bid.

While Bolsonaro is also planning to revamp the "Bolsa Familia" welfare program launched by the Workers Party, many in the government are questioning how sustainable his anti-poverty initiatives are.

Bolsonaro announced on Tuesday the COVID stipend would be extended to the end of the year, although at a reduced rate of 300 reais a month.

However, the program - which will cost the Treasury around 350 billion reais, about 5% of GDP - has blown a hole in Economy Minister Paulo Guedes' carefully constructed budget this year. Worryingly for investors, that may come at a political cost.

Bolsonaro's relationship with Guedes, a respected ex-Chicago school graduate and fiscal disciplinarian, has been damaged and speculation persists that the "super minister" - a darling of the markets - may resign.

"A bad fiscal position is bad for bonds, even though I think a big deterioration is already priced in for Brazil," said Luciano Sobral, chief economist at NEO Investimentos.

Lopez Obrador, meanwhile, says Mexico will reap longer-term rewards by avoiding the mistakes of the past, when "neoliberal" governments wasted taxpayer money bailing out corporations - effectively, transferring money from ordinary Mexicans to the wealthy elite.

"In the end, I think Mexico will serve as an example," Lopez Obrador said last week.

Since taking office in December 2018, Lopez Obrador has been cautious on spending - careful to avoid any risk of leaving his government hostage to debt markets.

He has slashed public sector pay to find money for his signature welfare and infrastructure projects. The modest relief measures his government has taken during the pandemic have been aimed mostly at key constituents such as the poor and the elderly.

Mexico pledged some 2 million loans for small businesses, but at 25,000 pesos each, the total outlay comes to less than $2.5 billion.

Some economists say Lopez Obrador has miscalculated the long-term effects of such a painful downturn.

Mariana Campos, a public spending expert at think tank Mexico Evalua, said the president has overlooked that the vast majority of Mexican employers were small- or medium-sized firms that cannot survive a major crisis without more government support.

"He's completely overestimating how much capital they have and how long they can last without recurring income," she said.

(This story refiles to remove extraneous word in paragraph 1)

(Reporting by Jamie McGeever in Brasilia and Dave Graham in Mexico City; Editing by Daniel Flynn and Steve Orlofsky)