Brazil economy bounces back from strike; strength may be fleeting 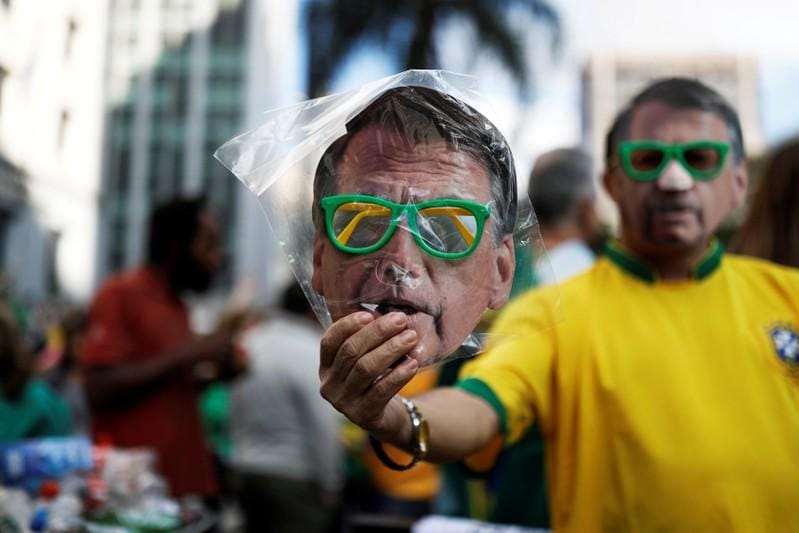 BRASILIA (Reuters) - Record-low interest rates and a one-off windfall from the release of pent-up worker savings funds likely helped Brazil's economy bounce back strongly in the third quarter after a nationwide truckers' strike disrupted production earlier in the year, a Reuters poll showed.

Yet newfound strength is likely to ease soon as firms anxiously await clear signs that newly elected President Jair Bolsonaro will address their concerns over a ballooning fiscal deficit that have held back capital spending.

Gross domestic product (GDP) probably rose 0.8 percent from the second quarter, according to the median of 25 forecasts, the fastest since the first quarter of 2017.

Even the lowest estimate, of 0.3 percent, would represent an acceleration from the 0.2 percent rate seen in the second quarter, when truckers protesting high diesel prices blocked highways across Brazil, choking off flows to major industries and forcing farmers to cull their flocks and dump milk.

At the other end of the scale, the most optimistic forecaster, HSBC, predicted an expasion of 1.7 percent, which would be the highest rate since the second quarter of 2013.

Economists at JPMorgan highlighted that a statistical bounce from the strike, as well as a non-recurring government measure allowing workers to withdraw from inactive severance accounts, accounted for much of the accelerated expansion.

That measure is estimated to have injected 15 billion reais in the economy this year.

"As the effects of these events should phase out during the last quarter of the year, this strength should be temporary," they wrote in a report.

JPMorgan expects Latin America's largest economy to expand only 0.4 percent in the fourth quarter, in line with wider market expectations.

A weekly central bank survey of over a hundred economists put 2018 growth at 1.39 percent, which would imply a fourth-quarter expansion of only 0.3 percent.

This suggests that Brazil's recovery from its deepest recession in decades is likely to remain slow and steady as opposed to fast and furious.

All components of demand - consumer spending, investments, government spending and net exports - likely contributed positively to growth in the third quarter, according to most of the 12 economists who replied to additional questions.

Interest rates at all-time lows helped support a recovery in corporate investments, despite uncertainty around October's presidential election. Corporate investments had slumped 1.8 percent in the strike-depressed second quarter versus the previous three months.

While continuously rising government spending did boost growth in the short term, it is likely to crowd out corporate spending in the future -- as has been the case in recent quarters, economists said.

Bolsonaro, a far-right lawmaker who won the presidency campaigning for a tough stance on crime and corruption, privatizations and deregulation, has pledged to plug the budget deficit in a matter of years.

Yet that would require negotiating an unpopular overhaul of the nation's costly pension reform with a fragmented Congress.

Contradictory statements from Bolsonaro's own team mean that is hardly a done deal.

"It's been years since we've been saying that a pension reform is an urgent necessity and that has not changed," said Luciano Rostagno, a strategist at Mizuho.

"We're past the point where we can give anyone the benefit of the doubt. Unless we see clear signs that the pension reform will be a reality, companies will not invest, banks will not lend and the economy will remain as sluggish as ever".