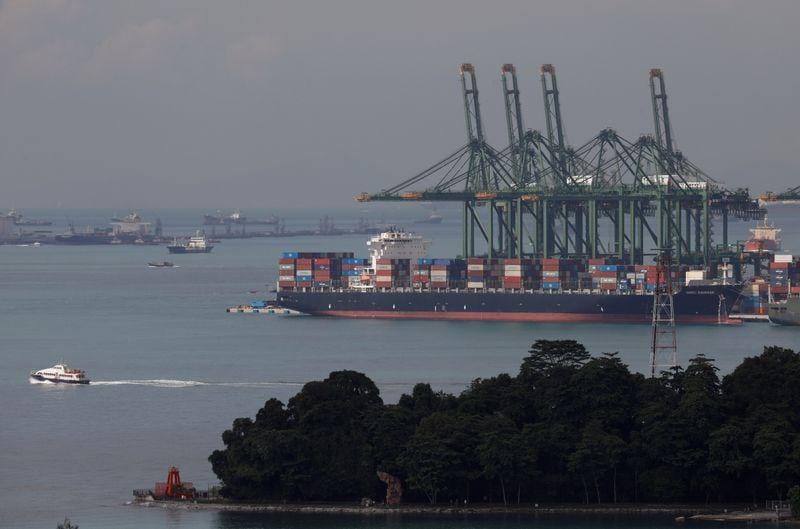 Exports from China surged 21% in November from a year ago as the country's mammoth industrial engine cranked out mountains of appliances, toys, clothes, personal protective equipment and other items currently in high demand around the world.

But due to China's lopsided trade balance - exporting three containers for every one imported recently - and delays in containers returning to China due to the pandemic overseas, a severe shortage is now starting to pinch export flows. Roughly 60% of global goods move by container, and according to United Nations trade data there are close to 180 million containers worldwide.

"We have so many orders but just cannot ship things," said Charles Xu, a mirror salesman in the export manufacturing hub of Yiwu in Zhejiang province who supplies U.S. retailers such as Walmart and Home Depot.

"Boxes are piling up at our factory and we don't have much space left. It's just hard to book containers, and everyone is bidding for them with high prices," he said.

Average container turnaround times have ballooned to 100 days from 60 days previously because of COVID-19-related handling capacity cuts in Europe and the United States, according to the China Container Industry Association (CCIA), and that has exacerbated the shortage. U.S. importers already reported problems with shipment delays in November.

The grounding of much of the global international passenger air fleet - which often also carries cargo - has also boosted demand for maritime freight.

With little change in prospect before coronavirus vaccines are rolled out globally, changing the dynamics of trade and freight, shipping rates have spiked as a result. The cost of chartering a 40-foot container from China to the U.S. East Coast scaled a record $4,928 this week, up 85% since June 1, according to Freightos data in Refinitiv Eikon.

Rates to Europe have jumped 142% over the same period, and by 103% to the Mediterranean via the Suez Canal.

The rates for some shorter-haul - and lower-margin - routes have jumped by even more. The Ningbo Containerised Freight Index from China to Singapore/Malaysia soared nearly 300% between early October and early December as a bidding war for shipping space broke out among Southeast Asian exporters.

Container manufacturers have expanded shifts and boosted capacity to try to keep up with demand, but are still falling short. Monthly output in China - which accounts for 96% of global production - hit a five-year high of 300,000 units in September, according to CCIA data.

Output has stayed high since, but shortages of steel, floor timber and qualified welders are seen capping further gains, CCIA said. Unless exactly sized to precise specifications and securely reinforced, containers risk splitting in the process of being loaded aboard ships.

Distorted trade flows in and out of consumer markets which are importing more and exporting less than normal due to the pandemic have also led to a record build-up in containers outside China.

The Port of Los Angeles, the top U.S. container port, imported 3.5 containers for every one it exported in October, and shipped a record 326,000 empty containers that month, according to shipping organisation BIMCO.

Sensing a profit-making opportunity, some private Chinese firms have been stockpiling containers which are made available to the highest bidder.

"Now there is a mafia. You pay extra to get access to containers from private yards, not shipping yards," said a Yiwu-based vendor of household goods, toys and stationery.

"Each container can cost 3,000 RMB, which is almost $500, and the freight is already three times higher than normal. Everyone's making money, but we aren't making money,”

"Right now waiting for container is two to four weeks. I still don't know if I will have container or not," said the vendor, who would not give his name as he was not authorised to speak to media.

Some lament they can't buy their way onto vessels, no matter the price.

"In the past, shipping rates on a container to South America, for example, at most cost $3,000, and that's a sky-high price. But now even if you're paying $6,000, shipping companies can't guarantee your spot," said the official, who declined to be named as he is not authorised to speak to media.

As a result, shipping associations in South Korea, Malaysia and elsewhere have requested government support in offsetting surging freight costs, while others are opting simply to try to sell more goods at home.

Still, others have little choice but to pay up.

"Sometimes, it's just an endless wait until you run out of patience and ask them 'how much do you want?'," said Hill Xiao, who runs an export business in southern China's Guangdong province that helps factories sell clothes and toys abroad.

"If you can't get a container, you cannot ship things, and you can't get the money. It really weighs on our cash flows," Hill said.

Industry observers expect the container tightness to persist until coronavirus vaccines are rolled out widely and more global travel resumes.

"We're seeing an unusually high demand for goods globally, which is likely to cool as we move into 2021 because of the (expected) service-led recovery, particularly in Western economies," said Frederic Neumann, co-head of Asian Economics Research at HSBC.

"At the same time, some of the logistical bottlenecks, namely a lack of passenger aircraft that can carry cargo, should ease as well once we have a vaccine rolled out."