By Eric M. Johnson SEATTLE (Reuters) - Four days after leaked internal pilot messages set off a media firestorm for Boeing Co., former colleagues have defended a former pilot who voiced concerns about unreported 737 MAX software problems two years before fatal crashes. Chief Technical Pilot Mark Forkner described in the leaked messages how MCAS cockpit soboeing ftware, which has since been linked to crashes in Indonesia in 2018 and in Ethiopia in March this year, was 'running rampant' during a flight simulator session. 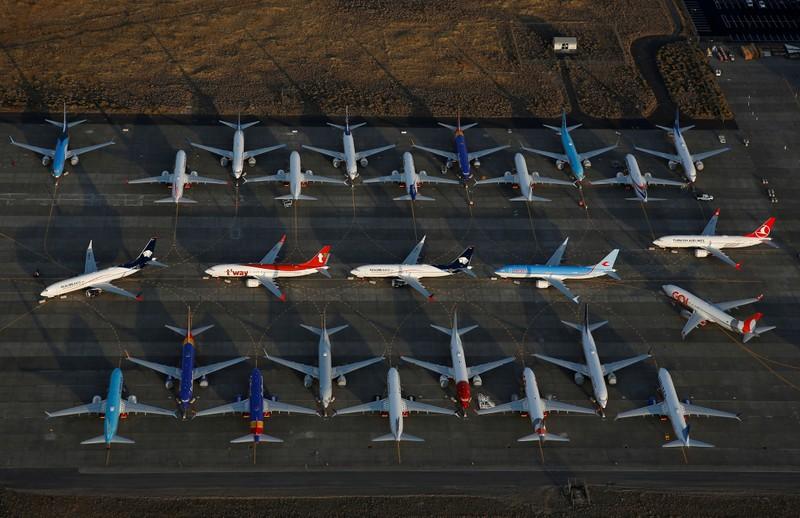 Chief Technical Pilot Mark Forkner described in the leaked messages how MCAS cockpit soboeing ftware, which has since been linked to crashes in Indonesia in 2018 and in Ethiopia in March this year, was "running rampant" during a flight simulator session.

The messages fuelled speculation that either Boeing or Forkner or both knew about problems with the plane's flight control software well before the two crashes which killed a total of 346 people, sending its shares sharply lower.

But two people who worked directly with Forkner at the time he wrote the messages argued the erratic behaviour he described likely referred to the software on the flight simulator he was using rather than evidence of risks in the aircraft's actual MCAS flight control system.

For example, Forkner had no way of recreating the crash scenarios - when MCAS triggered off data from a single faulty"angle of attack" sensor - because there was "no technical way" to shut off one of the two sensors in the simulator, said one of the people, a former test pilot with direct knowledge of the simulator Forkner used.

"It wasn't even something they would be looking for," headded.

The Seattle Times earlier reported that the problems were connected to the simulator rather than the plane itself.

Asked for comment about his former colleagues' appraisal of the exchanges, Forkner's lawyer David Gerger said: "He would never put himself or his friends or a passenger in a plane if he thought it was unsafe."

A Boeing spokesman did not immediately respond to a request for comment. Boeing had tried repeatedly to get Forkner to agree to talk to the company before it turned the messages over to FAA, a person briefed on the matter said.

On Sunday, Boeing said it had not been able to speak to Forkner but that he had said through a lawyer that his comments reflected a reaction to a simulator programme, not the MAX itself.

"In my opinion, the messages are no smoking gun," said the second former engineering colleague, Rick Ludtke.

Forkner wrote on LinkedIn that he and Ludtke worked closely on several "high visibility projects" for the 737.

"The people who knew him and understood his role could see that he wasn't talking about MCAS in a first-person, informed way," Ludtke said.

The former employees also said Forkner's language gave away that he was unaware of recent changes engineers made to the MCAS cockpit software, which was still being fine-tuned before FAA certification.

At another point in the conversations, Forkner says he "basically lied to the regulators (unknowingly)", to which a colleague responds, "it wasn't a lie, no one told us that was the case."

The former employees said Forkner added "unknowingly" because the information he relayed to the FAA was based on what engineers had told him and that he appeared to be unaware of changes to MCAS' function at low speeds until he witnessed it in the simulator, rendering what he told the FAA incorrect.

The world's largest planemaker is eight months into a global crisis over the safety ban of its 737 MAX in the wake of the crashes.

The messages between Forkner and a colleague discussing simulator software flaws, and another batch of Forkner's emails related to pilot training, have emerged as crucial issues in investigations into Boeing's development of the MAX.

The reaction to the messages was harsh and immediate, with Democrat Peter DeFazio, the chair of a U.S. House committee investigating Boeing, saying the "outrageous" messages suggest "Boeing withheld damning information" from the Federal Aviation Administration.

Boeing is making progress on getting the 737 MAX aircraft in the air again, but the FAA will need at least several more weeks for review, FAA Administrator Steve Dickson said earlier on Tuesday.

Boeing shares rose almost 2% on Tuesday after it put out a lengthy statement defending its actions during the crisis.

Sam Graves, the top Republican on the House Transportation committee, said the leaked messages amounted to "an incomplete snapshot in time", saying they raised a number of questions.

"Most importantly, what did Boeing do with the information?" Graves said.