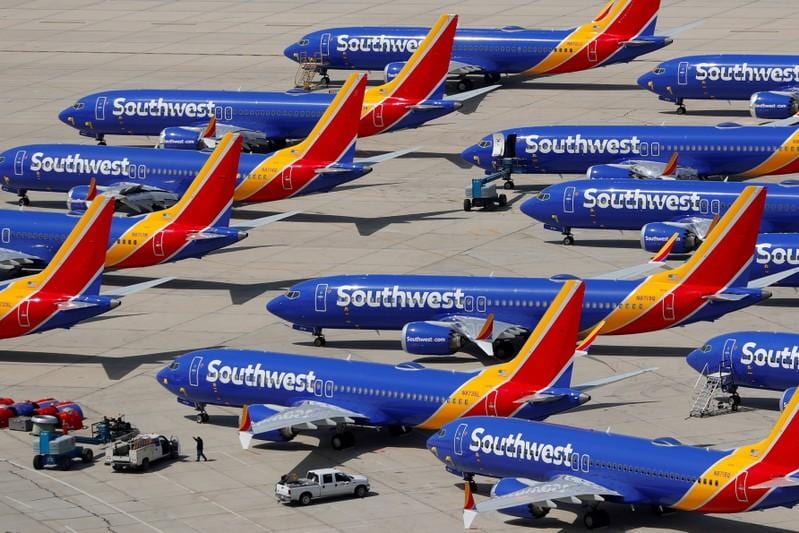 (Reuters) - Boeing Co is hoping to win regulatory approval for its revamped 737 MAX by October at the earliest, a company official said on Thursday, meaning that airlines will have to again extend flight cancellations as they await the return of the grounded jet.

Boeing Co's shares fell 3% on Thursday, after the Chicago planemaker told air carriers that it would complete the latest software update for the 737 MAX by September after a new issue arose last week during a simulator test.

That is later than most airlines had expected. The new timeline means the plane is not likely to resume flying until at least October. Southwest Airlines Co, the world’s largest MAX operator with 34 jets and dozens more on order, said on Thursday it was extending 737 MAX cancellations until early October.

Boeing is grappling with the fallout of two deadly crashes of its 737 MAX jet within five months, which prompted a worldwide grounding in March and a string of litigation.

Boeing has been working on an upgrade for a stall-prevention system known as MCAS since a Lion Air crash in Indonesia in October, when pilots were believed to have lost a tug of war with software that repeatedly pushed the nose down.

The families of Lion Air crash victims are in settlement talks with Boeing, which means the planemaker can avoid prolonged and potentially costly court litigation. However, the families of some victims of a second crash on Ethiopian Airlines in March are not ready to settle, their lawyers told a Chicago judge on Thursday.

American Airlines and United Airlines, which also operate the MAX in the United States, have pulled the planes from their schedules into early September.

(Reporting by Tracy Rucinski in Chicago, David Shepardson in Washington and Eric M. Johnson in Seattle; additional reporting by Ankit Ajmera in Bengaluru; editing by Marguerita Choy and Bill Rigby)