Boeing did not adequately consider pilot reactions in 737 MAX: NTSB

By David Shepardson WASHINGTON (Reuters) - Boeing Co failed to adequately consider how pilots respond to cockpit emergencies in its 737 MAX safety assessment and may need to make changes to flight deck alerts, pilot procedures and training, the National Transportation Safety Board said. The U.S. 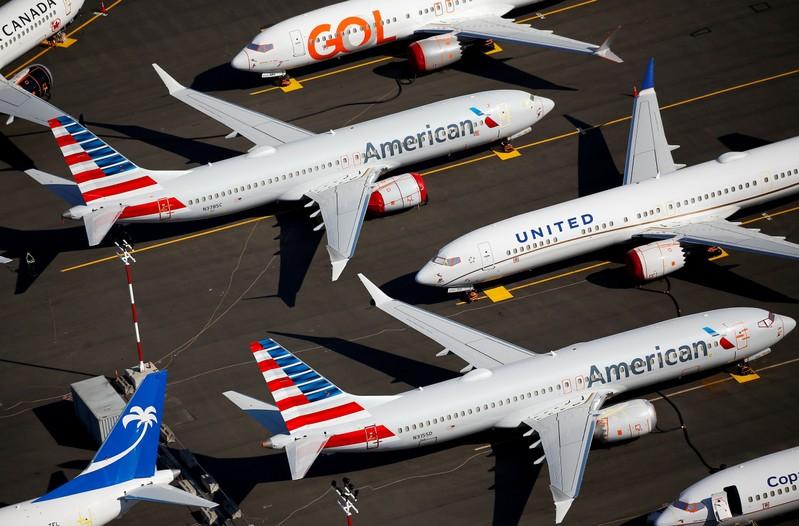 The U.S. air accident investigator unveiled on Thursday several recommendations to the Federal Aviation Administration (FAA) following the fatal crashes of a Lion Air 737 MAX in Indonesia and an Ethiopian Airlines 737 MAX five months apart that killed a total of 346 people. The crashes led to the plane's grounding and raised questions about the FAA's certification of the new aircraft.

The crews in those crashes "did not react in the ways Boeing and the FAA assumed they would,” said NTSB Chairman Robert Sumwalt.

Boeing has said the feeding of erroneous Angle of Attack (AOA) data to a system called MCAS that pushed the planes lower was a common link in two wider chains of events leading to the crashes. MCAS stands for Manoeuvring Characteristics Augmentation System.

"We want FAA to ensure that Boeing takes a close look at all these different failure conditions that can activate MCAS and ensure that they have evaluated the pilots' response to that," Dana Schulze, director of the NTSB Office of Aviation Safety, told reporters. NTSB wants that assessment completed before the plane's grounding is lifted.

Boeing's 737 MAX simulator tests with test pilots "did not look at all potential flight deck alerts and indications that pilots might face when this specific failure condition occurred in Lion Air and Ethiopian Airlines," Schulze said, adding that Boeing did not evaluate the "actual scenario" in the two fatal crashes in the simulator.

Boeing should "more clearly and concisely inform pilots of the highest priority actions when multiple flight deck alerts and indications are present," the NTSB said.

U.S. House of Representatives Transportation Committee chairman Peter DeFazio said on Thursday that the NTSB report suggests Boeing "may not have made realistic assumptions about how pilots respond to multiple simultaneous and potentially confusing warnings in emergency situations."

"Commercial airplanes should be able to be safely flown by an appropriately-trained pilot on his or her worst day," DeFazio added.

The FAA said in a statement it "will carefully review these and all other recommendations as we continue our review of the proposed changes to the Boeing 737 MAX."

Boeing said in a statement it is "committed to working with the FAA in reviewing the NTSB recommendations."

The NTSB said the FAA should address assumptions Boeing and other manufacturers make in designing software systems to react to emergencies, and whether the systems should be revised to account for varying pilot reactions to cockpit alarms and alerts.

The safety board also said the FAA should develop "robust tools and methods" to validate assumptions about pilot response.

Boeing is revising the 737 MAX software to require the MCAS system to receive input from both AOA sensors, and has added additional safeguards.

FAA Deputy Administrator Dan Elwell said on Wednesday at a congressional hearing that if the AOA sensors differ by 5.5 degrees or more then MCAS cannot operate. If MCAS does operate it can only operate once unless the problem had been "completely resolved," he added.

"We still have a lot of work to do," Elwell said.

The NTSB said it was not analysing pilot actions in the two fatal crashes and that the recommendations were not a reflection on the pilots in those crashes, but rather a response to assumptions in the U.S. certification process.

Boeing's 737 MAX safety system assessments assumed "immediate and appropriate pilot corrective actions in response to uncommanded flight control inputs, from systems such as MCAS," the NTSB said. It should take into account how other possible flight deck alerts and other factors could impact pilots' decision making and makes changes as warranted, the agency added.

"We want them to step up how they certify these airplanes with regard to human interface," said Schulze. "Machines are deterministic. They are going to fail the same way if the same conditions are present. Humans are not that way. We are just asking the FAA to ... consider that factor more scientifically in how they certify airplanes."

The NTSB said it wants the FAA to require the same assessment for all other airplane manufacturers and believes other international regulators that certify airplanes should consider making the same changes.

It is not clear when Boeing will conduct a key certification test flight, a step needed before the FAA can return the plane to service. The company has said it hopes to resume flights early in the fourth quarter.

The FAA said last week it will need a month after the test flight is completed before it could allow flights to resume.

Elwell said the FAA has not decided on what training changes it will require.