By David Shepardson WASHINGTON (Reuters) - Boeing Co Chairman Dave Calhoun said on Tuesday the company's board believed Chief Executive Dennis Muilenburg 'has done everything right,' just days after he came under attack from U.S. lawmakers and repeatedly refused to step down at a hearing on two fatal crashes involving Boeing 737 MAX airliners. 'He has our confidence,' Calhoun said in a CNBC interview, adding that Muilenburg called him on Saturday, offering to give up much of his compensation for 2019 and could lose equity grants until early 2021. 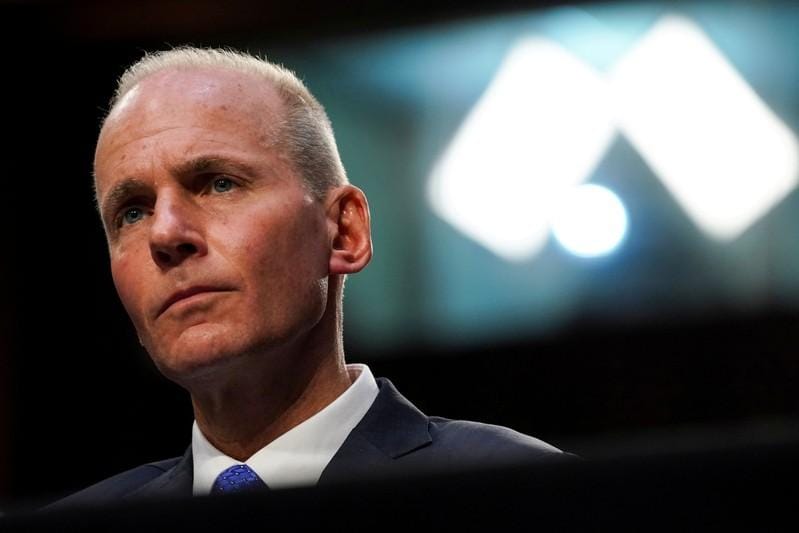 "He has our confidence," Calhoun said in a CNBC interview, adding that Muilenburg called him on Saturday, offering to give up much of his compensation for 2019 and could lose equity grants until early 2021. The board had stripped Muilenburg of his chairman title last month.

"From the vantage point of our board, Dennis has done everything right," Calhoun said.

Boeing did not plan to cut the production rate of the 737 MAX or to rebrand it, he said.

Last week, several U.S. lawmakers urged Muilenburg to resign https://www.reuters.com/article/us-boeing-airplane-congress/u-s-lawmakers-will-press-boeing-ceo-on-day-2-of-testimony-idUSKBN1X912Y, pressed him on whether he would refuse compensation and criticized him and Boeing for not being entirely candid.

Muilenburg repeatedly said last week his focus was on seeing the MAX through to returning to service and told Congress: "It's not about the money for me."

In the wake of the criticism by lawmakers, Muilenburg called Calhoun on Saturday to suggest that he not be awarded any bonuses for 2019 or any equity grants "until the MAX in its entirety is back in the air and flying safely," which Calhoun said could be by the end of 2020 or in early 2021.

"It was a significant move on his part," Calhoun said, adding Muilenburg "always does the right thing."

Boeing spokesman Gordon Johndroe confirmed the board has endorsed Muilenburg's proposal to significantly reduce his compensation.

The board is not seeking to claw back any of his prior compensation, Calhoun said.

Muilenburg faced intense grilling by U.S. lawmakers over what the company knew about its MCAS stall-prevention system linked to the two deadly crashes, and about delays in turning over internal 2016 messages that described erratic behavior of the software in a simulator.

"Our job is to fix MCAS," Calhoun said.

Calhoun said a decision on compensation for U.S airlines, like Southwest Airlines Co

The two crashes killed 346 people and prompted the grounding of Boeing's best-selling plane in March. The Federal Aviation Administration is not expected to allow the plane to return to service until December at the earliest.

"Something went drastically wrong, a total of 346 people died, and we have a duty to fix it," Representative Peter DeFazio said last week.

The board is getting daily updates on the effort to return the airplane to service, said Calhoun, who has suggested Muilenburg could remain as CEO after the 737 MAX begins flying again, saying: "Remember, Dennis didn’t create this problem."

Federal prosecutors aided by the FBI, the Transportation Department's inspector general and several blue-ribbon panels are investigating the 737 MAX’s certification.