By Gabriela Baczynska BRUSSELS (Reuters) - Britain and the European Union are at odds over safeguarding corporate fair play after seven months of negotiations that have yet to yield a deal for tariff- and quota-free trade beyond Dec. 31 when London leaves the bloc's orbit. Here is the so-called 'level playing field' explained 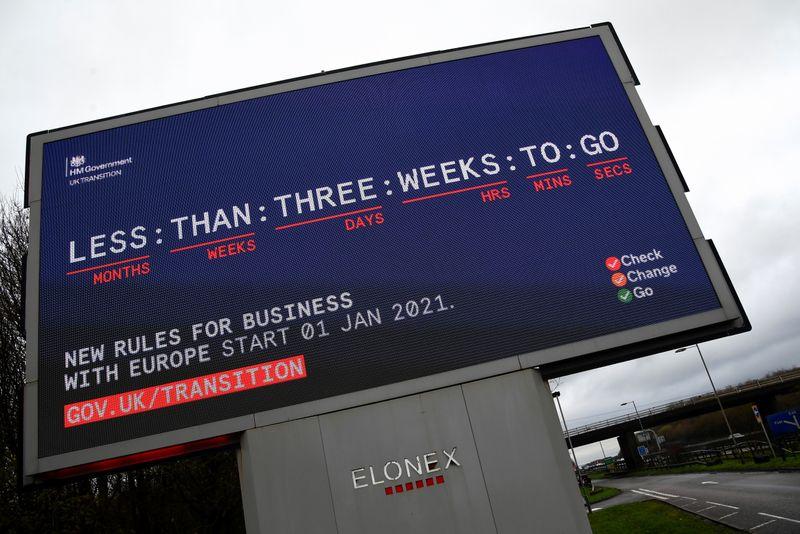 BRUSSELS (Reuters) - Britain and the European Union are at odds over safeguarding corporate fair play after seven months of negotiations that have yet to yield a deal for tariff- and quota-free trade beyond Dec. 31 when London leaves the bloc's orbit.

The EU says Britain can only export to its single market of 450 million consumers without trade barriers if it offers solid guarantees that it would not undercut the bloc's own producers with substandard goods sold at dumping prices.

That is why the bloc wants to tie Britain to its environment, labour and social production standards, saying that is needed to ensure fair play for companies.

But London says Brexit is about regaining sovereignty and does not want to be locked into following EU rules automatically.

Since Britain has been an EU member state for 47 years until it left in January, the two sides have the same or very close standards, so negotiators are mostly discussing how to manage any future gaps.

WHAT ABOUT STATE AID?

The EU wants Britain to set up a domestic oversight body independent of government to regulate public corporate subsidies in the future. While Britain has not rejected setting up such a body, the sides have yet to agree on detail.

The bloc's executive Commission now acts as the state aid watchdog for the EU, which still wants Britain to notify about any future subsidies before actually granting them to its firms.

London, which wants to use state aid to support companies, possibly targeting technology startups, does not want to be hamstrung by having to notify the Commission of any subsidies in advance and wants instead to inform the bloc afterwards.

WHAT ARE POSSIBLE SOLUTIONS?

Both sides have agreed that they will uphold their environmental, labour and social protections. The EU then introduced a so-called "ratchet clause" which would force Britain to adapt its regulations to EU ones in the future.

British Prime Minister Boris Johnson rejected that earlier this month and London has offered a review of the baseline standards after a number of years.

The EU has then dropped the ratchet clause, EU diplomatic sources told Reuters, but says UK proposals do not provide solid enough guarantees.

Negotiators have since looked at allowing for divergence on standards in a trade deal but are currently stuck over agreeing how to define and remedy a situation when one side could be seen as trying to undercut the other's market.

The EU wants to be able to retaliate by swiftly erecting trade barriers to prevent UK companies from gaining an unfair competitive advantage on its own market.

London has rejected such "lightning tariffs" and wants independent arbitration to determine what punitive steps could be imposed if it can be proved that competition has been distorted.

While the EU now recognises the need for a joint body to examine and decide when the level playing field has been violated, the sides are still at odds over effective remedies for any such situation.

(Reporting by Gabriela Baczynska and Elizabeth Piper in London; Editing by Andrew Cawthorne)