By Kevin Buckland, Elizabeth Howcroft and Gertrude Chavez-Dreyfuss NEW YORK/LONDON/TOKYO (Reuters) -Bitcoin fell to a more than two-month low on Thursday in the wake of Tesla Inc chief Elon Musk reversing his stance on accepting the digital currency, selling off for a second straight session on news of a U.S. probe into Binance, one of the world's biggest crytocurrency exchanges 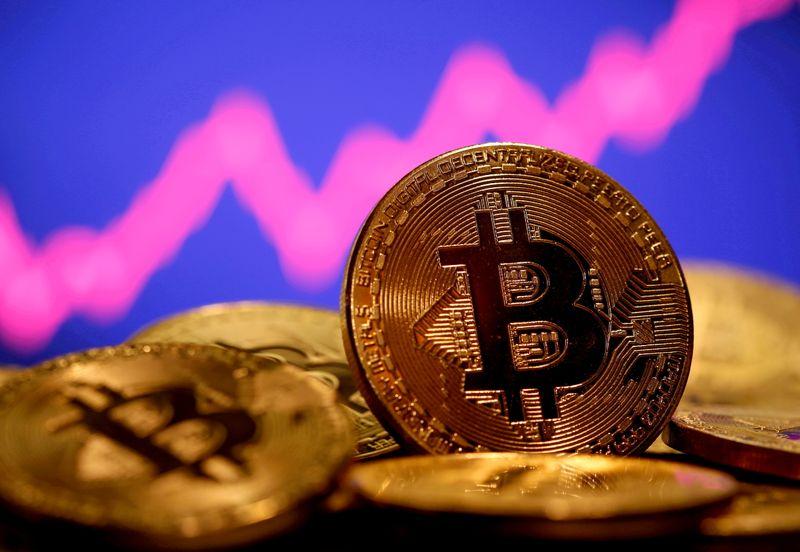 NEW YORK/LONDON/TOKYO (Reuters) -Bitcoin fell to a more than two-month low on Thursday in the wake of Tesla Inc chief Elon Musk reversing his stance on accepting the digital currency, selling off for a second straight session on news of a U.S. probe into Binance, one of the world's biggest crytocurrency exchanges.

Thursday's sell-off followed a 17% drop in the price of the world's largest cryptocurrency on Wednesday following Musk's remarks that Tesla would stop accepting the digital token as payment for its electric cars.

Bloomberg reported on Thursday that as part of the Binance inquiry, the U.S. Justice Department and the Internal Revenue Service have sought information from individuals with insight into its business.

"Bitcoin's critics will once again pounce on the many colorful personalities that seek to connect themselves with the space," said Paolo Ardoino, chief technology officer at crypto exchange Bitfinex.

"However, it is important to remember that bitcoin is much bigger than the celebrities of today or indeed the makers and shakers in the space."

Tesla's announcement on Feb. 8 that it had bought $1.5 billion of bitcoin and would accept it as payment for its electric vehicles has been one factor behind the digital currency's surge this year.

"We are concerned about rapidly increasing use of fossil fuels for Bitcoin mining and transactions, especially coal, which has the worst emissions of any fuel," Musk tweeted.

Musk's comments roiled markets even though he said Tesla would not sell any bitcoin and would resume accepting it as soon as "mining" for it transitioned to more sustainable energy.

In a second tweet on Thursday, Musk denounced the "insane" amount of energy used to produce bitcoin, which pushed bitcoin lower.

The digital currency is still trading about 30% higher than before Tesla's announcement in February.

"I don't think everything is selling off just because of this news. This was kind of the straw that broke the camel's back in terms of adding to the risk sell-off," Wang said.

At current rates, bitcoin mining devours about the same amount of energy annually as the Netherlands did in 2019, data from the University of Cambridge and the International Energy Agency showed.

"Environmental matters are an incredibly sensitive subject right now, and Tesla's move might serve as a wake-up call to businesses and consumers using Bitcoin, who hadn't hitherto considered its carbon footprint," Laith Khalaf, an analyst at AJ Bell, said.

Tesla shares were down 2.4%, while the biggest U.S. cryptocurrency exchange, Coinbase, tumbled nearly 9% . Smaller cryptocurrencies were less affected by the news.

"The reason given in the tweet is fossil fuel use for the mining of BTC, but most cryptocurrencies have already found more efficient ways to do that and therefore outperformed."

Bitcoin's share of the total market capitalization of all cryptocurrencies dropped to 42%, its lowest since June 2018.

Cryptocurrency dogecoin lost more than a third of its price on Sunday after Musk, whose tweets had stoked demand for the token earlier this year, called it a "hustle" on the "Saturday Night Live" comedy show.

By Tuesday, however, he was asking his followers on Twitter if they wanted Tesla to accept dogecoin.

Dogecoin dropped 12% to 39 cents on Thursday, according to data tracker CoinGecko.com.