By Caroline Humer NEW YORK (Reuters) - BioMarin Pharmaceutical Inc is turning to the theatre to establish its name with haemophilia patients, long before its experimental cure for the bleeding disorder could reach the market. Earlier this month, BioMarin hosted 25 teenagers and their chaperones for an all-expenses paid trip to New York City, where they performed a Broadway-style musical based on their own experiences with bleeding disorders 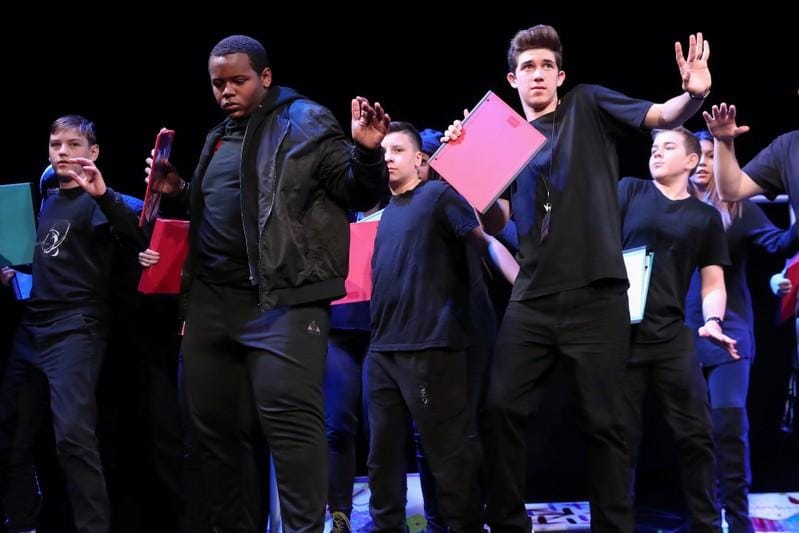 Earlier this month, BioMarin hosted 25 teenagers and their chaperones for an all-expenses paid trip to New York City, where they performed a Broadway-style musical based on their own experiences with bleeding disorders. Some came from as far away as Hawaii to work with a professional theatre crew, have their headshots taken and meet members of the show Hamilton.

During breaks, some stopped to infuse the blood-clotting medications, with a nurse on hand to attend to any health needs.

Well beyond a feel-good philanthropic effort, BioMarin’s business strategy here is to build a long-term relationship with haemophilia patients who it wants to one day use its gene therapy. If approved, it is expected to be one of the most expensive on the market at well over $1 million per person.

BioMarin’s sponsorship of “Hemophilia: The Musical” – conceived more than a year ago while its own experimental haemophilia gene therapy will not reach the market until at least mid-2020 - stands out in a drug industry known for pulling out all the stops to convince doctors and patients to use their medicines. U.S. regulations allow companies to discuss diseases and care with patients, but they cannot advertise products before they are accepted by health regulators.

"What the haemophilia community has said to us is, 'Who is BioMarin. Gene therapy, that looks interesting, but who is BioMarin? We've got to get to know BioMarin. We need to know you and trust you before your product shows up," BioMarin Chief Commercial Officer Jeff Ajer said in an interview.

With that in mind, BioMarin turned to Patrick James Lynch, who runs the Los Angeles-based marketing and production agency Believe Ltd that specializes in bleeding disorders. Lynch, who has haemophilia, recruited the applicants, managed the details and led the group - in matching black jackets with Hemophilia the Musical and BioMarin logos - to Times Square.

For Porus Pavri, 14, the three-day weekend represented a rare opportunity to kick back with teenagers who understand his daily challenges. Acting, he said in the play, was like his life at home: “It is one of the only activities I can do where I can go all out without worrying about my health.”

Concerns he will be hurt has put activities such as sports, or even the school marching band, off limits to Porus, who has coped with an especially severe form of haemophilia for most of his life.

"At one point I had lost full faith in the American medical system. That faith, with a lot of difficulty, has been restored," Yasmin Pavri, Porus’ mother, said.

Earlier this year, Porus switched to Roche’s Hemlibra, which has reduced the bleeding and pain. Without it, he could not have participated in the musical, Pavri said. An earlier experience in switching medications made her reluctant to consider the Roche therapy. She would like to see several years of data on a gene therapy, whose effects are likely irreversible, before contemplating it for her son.

But after the weekend workshop, she said she felt more comfortable with BioMarin above the other companies working on gene therapies.

Unlike most countries, the United States allows drug companies to market their FDA-approved products directly to consumers. In recent years, new laws have curbed drugmaker gifts to doctors, based on studies showing that even small items, such as a pen, can influence behaviour.

The relationships that pharma companies have with patients are “potentially problematic” because their influence may not align with the effectiveness of a treatment, said Alyssa Burgart, a clinical ethicist at the Lucile Packard Children's Hospital at Stanford University.

“This is planting a very early seed for adolescents” given that the drug is still in trials, she said.

BioMarin disagreed with her assessment, and said that the project aimed to create an environment for teens with bleeding disorders to connect art and wellness, and is consistent with the company’s history in expanding care for people with rare genetic diseases.

“When we first started working with Believe Limited, we shared a strong principle that this should not be a marketing effort,” spokeswoman Debra Charlesworth said.

There are about 20,000 U.S. patients with haemophilia, 16,000 of which suffer from haemophilia A which BioMarin and others are targeting. The current standard therapy requires patients to infuse factor proteins into their bloodstream several times a week for life, costing hundreds of thousands of dollars a year. Some develop an immune response, like Porus, and their costs rise to more than $1 million per year, making haemophilia patients among some of the most expensive for the U.S. healthcare system.

BioMarin sees that price tag as an opening for its own experimental gene therapy – which if successful will cure the disorder in patients and justify the price.

"We haven't decided what we are going to price it at, but it's going to be for sure north of $1 million," BioMarin CEO Jean-Jacques Bienaime he said in an interview. "We are not trying to introduce a new therapy that is going to cost substantially more per year," he said, adding that it would allow a deferred payment plan over two to five years if needed.

Other drugmakers see the market potential for haemophilia gene therapies, but have a longer road ahead. Pfizer Inc

BioMarin is aiming to submit the therapy to regulators in the fourth quarter of 2019, and has the capacity to produce 4,000 gene therapy doses a year at its Navato, California factory.

BioMarin’s approach differs from Roche, which launched Hemlibra for difficult-to-treat haemophilia patients in late 2017 and more broadly in October. The drug’s price is about $492,000 per year for a 140 pound person. Roche has made donations to sponsor patient advocacy organisations, and provided information to physicians and others about Hemlibra, Roche spokeswoman Ulrike Engels-Lange said. It has not directly sponsored an event.

By contrast BioMarin executives, including the head of research and development and a haemophilia business head, attended a parents breakfast during the New York weekend, BioMarin’s Charlesworth said.

Its general counsel gave introductory remarks at the musical and at the end of the production, Charlesworth enlisted caregivers give each teenager a small Tony Award-like trophy in areas such as “Biggest Heart” and “Unbreakable Spirit.”

She encouraged participants to fill out a survey to help the company decide on the program’s future and for longer-term research around the connection between art and health that BioMarin plans to fund.

“I think this is the beginning of a beautiful friendship,” she said.