By Allison Lampert and Debroop Roy (Reuters) - Billionaire Gerry Schwartz pounced on Canada's WestJet Airlines on Monday as his private equity firm Onex Corp offered to buy the struggling airline for C$3.5 billion ($2.6 billion), betting it can turn around its recent decline by taking the company private. The surprise offer for C$31 a share, a 67% premium to their closing price on Friday, sparked a surge in WestJet shares, which closed up 60% at $29.61. If completed, it would be the biggest private equity deal ever for an airline, according to Refinitiv data 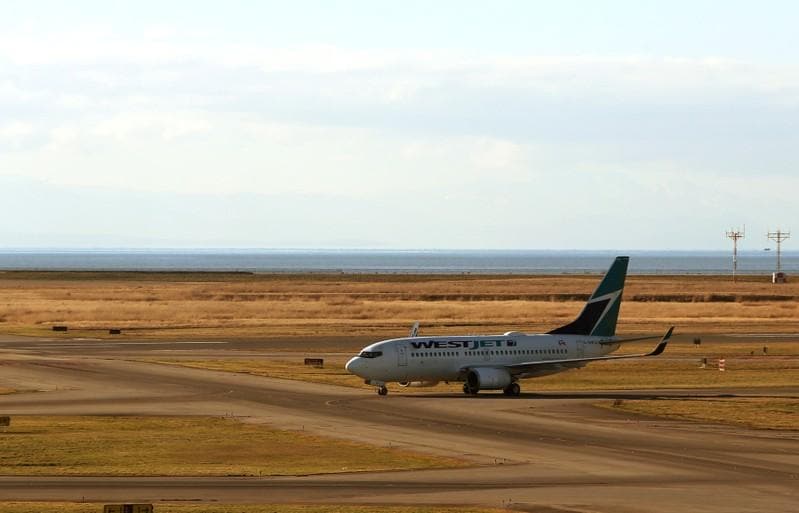 By Allison Lampert and Debroop Roy

(Reuters) - Billionaire Gerry Schwartz pounced on Canada's WestJet Airlines on Monday as his private equity firm Onex Corp offered to buy the struggling airline for C$3.5 billion ($2.6 billion), betting it can turn around its recent decline by taking the company private.

The surprise offer for C$31 a share, a 67% premium to their closing price on Friday, sparked a surge in WestJet shares, which closed up 60% at $29.61. If completed, it would be the biggest private equity deal ever for an airline, according to Refinitiv data.

If Onex obtains shareholder and regulatory approvals, the deal would help Schwartz get his hands on an airline two decades after he missed out on buying Air Canada, WestJet's bigger rival. Air Canada shares rose more than 5%.

WestJet shares, which touched a record high of C$34.95 in December 2014, have recently been trading at almost half that level. The airline has reported declining net profit for each of the last three years, hurt by rising fuel costs, pressure on ticket prices and other issues.

Even before the global grounding of Boeing's 737 MAX jets in March, WestJet's earnings had slipped as it worked to contain costs as its workforce unionized and was spending money on bold growth plans to expand international travel, introduce first class cabins and launch a budget carrier called Swoop.

Up to Friday's close, WestJet shares had fallen 5.5% in the last 12 months while Air Canada shares gained 58%. American rival United Continental Holdings, the company that owns United Airlines, rose 28% in the same period.

Onex, founded in 1984 by Schwartz who started out at Bear Stearns & Co in the 1970s, approached WestJet's board in March. Neither Schwartz, nor any other Onex executive was available to comment.

WestJet Chief Executive Ed Sims said on BNN that the deal will allow the company to execute on its long-term growth strategy without the constraints of quarterly scrutiny. It is "a reaffirmation that the path we’re on is actually a path towards long-term profitability irrespective of the sort of headwinds that you refer to that we saw regularly in 2018.”

With about $31 billion of assets under management, Onex is not new to investing in the aerospace industry. It bought Spirit AeroSystems from Boeing Co in 2005 and exited its investment in 2014 after making $3.2 billion.

Under Schwartz, who remains CEO, Onex tried to buy Air Canada in 1999 and merge it with now defunct Canadian Airlines, but that attempt failed. Onex shares closed up 4% in a broadly lower market.

Air Canada Chief Executive Calin Rovinescu declined to comment on the Onex deal, telling Reuters "it's business as usual," on the sidelines of the Air Transport Action Group conference in Montreal.

And the parent company of Montreal-based Air Transat has said it is in talks with more than one party regarding a potential transaction, although it is not yet clear what group might buy it.

Onex could "ultimately look" to also acquire Transat to "complement WestJet's offering," wrote Desjardins analyst Benoit Poirier in a note to clients. Transat AT stock was up 4 percent in afternoon trading.

The WestJet purchase will be led by Onex Partners, Onex's private equity platform focused on larger investments. The airline's board has urged shareholders to vote in favour.

The deal is subject to a number of conditions, including court and shareholder approval and receipt of certain regulatory approvals, including under the Canada Transportation Act.

“I am not going to prejudge until I see the details whether there are any regulatory obstacles – at first glance it doesn’t seem to be anything special,” he told reporters.

NO CHANGE TO 'COMPETITIVE LANDSCAPE'

Alberta's Premier said on Monday that WestJet and Onex have assured him the carrier's headquarters will remain in Calgary after the deal.

Chris Rauenbusch, president of the union local representing WestJet flight attendants, said he supports the deal after being informed by company executives that it would not lead to any layoffs among the carrier’s 14,000 employees, while permitting the continuation of its growth strategy.

"We do not believe this transaction dramatically alters the competitive landscape, at least negatively," Canaccord Genuity analyst Doug Taylor said.

A spokesman for Delta Air Lines said the proposed transaction does not impact plans to implement a U.S-Canada trans-border joint venture with WestJet.

The deal, which has a value of $5 billion including debt, is expected to close in the latter part of this year or early next year.

(Reporting by Debroop Roy in Bengaluru and Allison Lampert in Montreal; Additional reporting by Tim Hepher in Paris, David Ljunggren in Ottawa and Nia Williams in Calgary; Editing by Arun Koyyur and Dan Grebler)