Big Tech CEOs told 'time for self-regulation is over' by U.S. lawmakers

By Diane Bartz and Elizabeth Culliford WASHINGTON (Reuters) - The chief executives of Facebook, Google and Twitter appeared before Congress on Thursday to answer questions about extremism and misinformation on their services in their first appearances since pro-Trump rioters assaulted the U.S. Capitol on Jan. 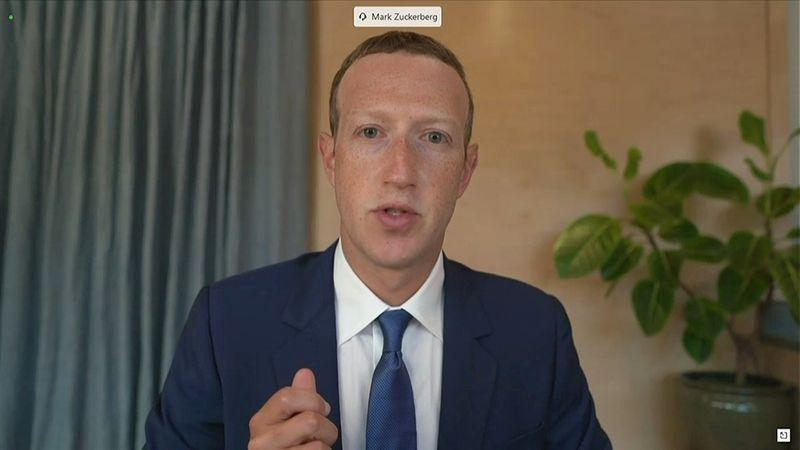 By Diane Bartz and Elizabeth Culliford

WASHINGTON (Reuters) - The chief executives of Facebook, Google and Twitter appeared before Congress on Thursday to answer questions about extremism and misinformation on their services in their first appearances since pro-Trump rioters assaulted the U.S. Capitol on Jan. 6.

While the hearing is virtual, advocacy group SumOfUs erected cut-outs of the three CEOs dressed as Jan. 6 rioters on the National Mall near the Capitol. One showed Zuckerberg as the "QAnon Shaman," a shirtless rioter wearing horns.

Lawmakers began the hearing by criticizing the social media platforms for their role in the riot and in the spread of COVID-19 vaccine misinformation.

"You failed to meaningfully change after your platform has played a role in fomenting insurrection and abetting the spread of the virus and trampling American civil liberties," said Democratic Representative Frank Pallone, chair of the Energy and Commerce committee.

"Your business model itself has become the problem and the time for self-regulation is over. It's time we legislate to hold you accountable," he added.

Republicans on the panel also criticized the tech giants for what they see as efforts to stifle conservative voices.

Former President Donald Trump, accused of inciting the Jan. 6 violence, has been banned by Twitter. Facebook has asked its independent oversight board to rule on whether to bar him permanently. He is still suspended from YouTube.

Some lawmakers are calling for Section 230 of the Communications Decency Act, which shields online platforms from liability over user content, to be scrapped or rejigged. Some Democrats, including President Joe Biden, agree.

The three CEOs have all appeared in front of Congress before, with Facebook's Zuckerberg clocking up seven appearances since 2018.

In written testimony released on Wednesday, Facebook argued that Section 230 should be redone to allow companies immunity from liability for what users put on their platforms only if they follow best practices for removing damaging material.

Lawmakers' scrutiny of misinformation on major online platforms intensified after U.S. intelligence agencies said Russia used them to interfere in the 2016 presidential election.

Last year saw false narratives about voter fraud that spurred Trump supporters to organize online and come to Washington on Jan. 6, as well as untruths about the severity of the COVID-19 pandemic, bogus treatments for the coronavirus and the safety of vaccinations.

(Reporting by Diane Bartz in Washington and Elizabeth Culliford in New York; Additional reporting by Nandita Bose in Washington; Editing by Sonya Hepinstall and Lisa Shumaker)