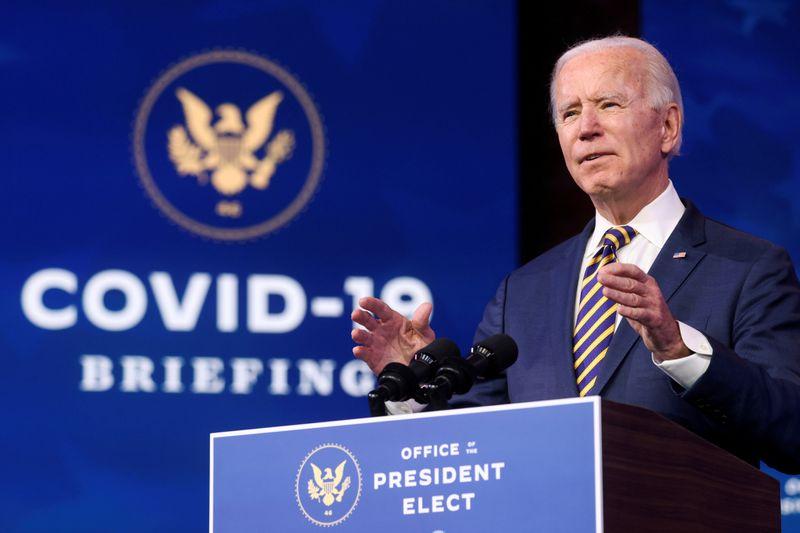 WILMINGTON, Del. (Reuters) - President-elect Joe Biden unveiled a $1.9 trillion stimulus package proposal on Thursday designed to jump-start the economy and speed up the U.S. response to the coronavirus pandemic.

Biden campaigned last year on a promise to take the pandemic more seriously than President Donald Trump, and the package aims to put that pledge into action with an influx of resources for the coronavirus response and economic recovery.

Details of the aid package were released by Biden's transition team earlier on Thursday.

It includes $415 billion to bolster the response to the virus and the rollout of COVID-19 vaccines, some $1 trillion in direct relief to households, and roughly $440 billion for small businesses and communities particularly hard hit by the pandemic.

Stimulus payment checks would be issued for $1,400 - topping up the $600 checks issued under the last congressional stimulus legislation. Supplemental unemployment insurance would also increase to $400 a week from $300 a week now and would be extended to September.

Biden's plan is meant to kick off his time in office with a large bill that sets his short-term agenda into motion quickly: helping the economy and getting a handle on a virus that has killed more than 385,000 people in the United States as of Thursday.

It also provides a sharp contrast with Trump, who spent the last months of his administration seeking to undermine Biden's election victory rather than focusing on additional coronavirus relief. Trump, who leaves office on Wednesday, did support $2,000 payments to Americans, however.

Many Republicans in Congress balked at the price tag for such payments, and Biden will face similar hurdles with his proposals, though he will be helped by the fact that his fellow Democrats will control both the House and the Senate.

The incoming president will seek to pass the legislation even as his predecessor faces an impeachment trial.

The Democratic-led House of Representatives voted to impeach Trump on Wednesday, making him the first president in U.S. history to be impeached twice. Ten of his fellow Republicans joined Democrats to charge him with inciting an insurrection in last week's deadly rampage at the Capitol.

The impeachment proceedings threaten to hang over the beginning of Biden's term, and Biden has encouraged lawmakers to handle the trial while also moving forward with his agenda.

Transition officials said Biden's plan will be a rescue package that will be followed up with another recovery package in the coming weeks.

"We're at a very precarious moment for our economy," one of the officials said.

The plan would extend moratoriums on foreclosures and evictions until September and include funding for rental and utility assistance.

The president-elect will also call on Congress to increase the minimum wage to $15 an hour, and the package will include assistance to fight hunger.

The coronavirus relief-related funds will go toward a national vaccine program, testing, investments for workers to do vaccine outreach and contact tracing, and money for states.

The Democratic president-elect said last week the stimulus package would be "in the trillions of dollars" and argued that more spending early on would reduce the long-term economic damage from the shutdowns spurred by the pandemic.

He also said there would be "billions of dollars" to speed up vaccine distribution, along with money to help reopen schools and for state and local governments to avoid laying off teachers, police officers and health workers.

Pandemic-related shutdowns and restrictions have cost millions of U.S. jobs.

The Biden plan - if enacted - would buy more time for the economy to bridge the period until the distribution of vaccines allows for a wider resumption of economic activity.

"It's one piece in the overall puzzle, it bridges the gap to getting restaurant workers, airline workers and other employees back to work," said Jake Dollarhide, chief executive at Longbow Asset Management in Tulsa, Oklahoma. "Once we had the outcome of the Georgia runoff election, you knew the stimulus was going to happen."