New Delhi: Telecom operator Bharti Airtel on Tuesday posted a consolidated loss of Rs 1,035 crore for the three months ended 31 December, 2019, as the AGR-hit telco provisioned for interest component of its statutory dues.

December Q3 scorecard marked the third straight quarter of losses for the company, which had logged a net profit of Rs 86 crore a year ago. The company also said the previously reported material uncertainty on the group's ability to continue as a going concern "no longer exists" after the recent Rs 21,502 crore fund raising by it.

"The net exceptional charge of Rs 10,500 million (Rs 1,050 crore) during the quarter ended 31 December, 2019 comprises of a charge on account of interest on the provision of license fee and spectrum usage charges recorded in the quarter ended September 30, 2019 of Rs 10,481 million pending disposal of the modification application before the Supreme Court," Airtel said.

The Supreme Court, in October last year, had upheld the government's position on including revenue from non-core businesses in calculating the annual AGR of telecom companies, a share of which is paid as licence and spectrum fee to the exchequer.

It may be recalled that for September quarter, Airtel had posted a staggering Rs 23,045 crore net loss, after provisioning of Rs 28,450 crore on account of Supreme Court ruling on past dues.

Shares of Airtel closed 1.72 percent higher on the BSE on Tuesday at Rs 519.10 apiece. The company announced results after the close of the market hours. 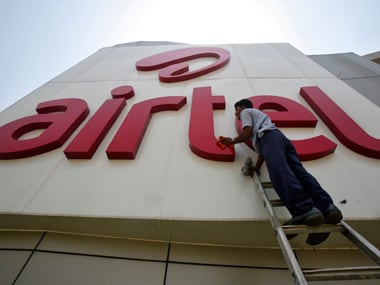 The company said that consolidated mobile data traffic on network grew 73 percent year-on-year. The company logged the "highest ever" 4G subscriber additions during the quarter at about 21 million, and benefited from up to 50 percent tariff hike - call and data charges - it had announced in early December.

Its average realisation from subscribers (Average Revenue Per User or ARPU) improved to Rs 135 in December from Rs 128 in the previous sequential quarter.

Bharti Airtel CEO - India and South Asia, Gopal Vittal said that while the tariff revision undertaken in December 2019 is a welcome step towards repairing the financial health of the industry, the company believes that tariffs must go up further for enabling the industry to invest in emerging technologies.

In a statement, Airtel said: "Mobile revenues have witnessed a year-on-year growth of 9.6 percent led by a strong focus on quality customers, up-trading and in some part benefitted by the recent tariff actions, although the full impact of the tariff actions is yet to be seen".

The company noted that in the previous quarter, the group had recorded as a liability/provision of Rs 34,260 crore as on September 30, 2019 on account of the Supreme Court verdict on Adjusted Gross Revenue (AGR) dues.

"These judgements/orders have significant financial implications on the Group," Airtel said, adding that the telecom operators have filed an application for modification petition in the apex court, which is pending for disposal.

Airtel said that it has recently raised Rs 21,502 crore through a combination of fresh equity issuance via qualified institutional placement and issue of convertible bonds and post the fund raising, "the management has concluded that the previously reported material uncertainty on the group's ability to continue as a going concern no longer exists".

As many as 15 entities owe the government Rs 1.47 lakh crore -- Rs 92,642 crore in unpaid licence fee and another Rs 55,054 crore in outstanding spectrum usage charges.

Vodafone Idea -- which is staring at unpaid statutory dues of Rs 53,038 crore, including Rs 24,729 crore of spectrum dues and Rs 28,309 crore in licence fee -- has already warned of shutdown if no relief is given.

Reliance Jio, last month, has reported 62.5 percent jump in its net profit for the December quarter at Rs 1,350 crore.