Back to beers for AB InBev after failed Asian float

By Philip Blenkinsop BRUSSELS (Reuters) - AB InBev's cancelled Asian stock market listing will slow but not derail the world's largest brewer's efforts to cut its debt mountain, delaying future acquisitions and prioritising its main challenge - selling more beers. The Belgium-based company on Friday shelved plans to list its Asian Pacific business in Hong Kong in what would have been the world's biggest initial public offering so far this year. The brewer has said that even without the flotation of a minority stake in the Asian division Budweiser APAC it will reduce its net debt to core earnings (EBITDA) ratio to below four times by the end of 2020 - from 4.6 at the end of 2018. 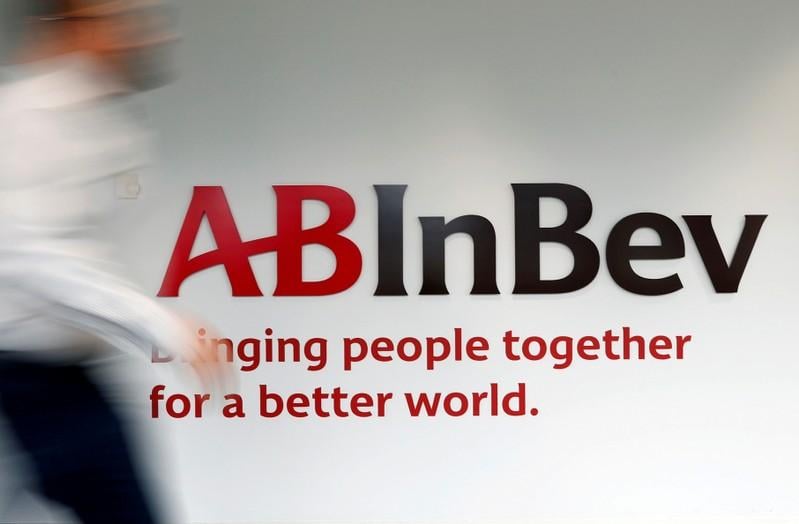 The Belgium-based company on Friday shelved plans to list its Asian Pacific business in Hong Kong in what would have been the world's biggest initial public offering so far this year.

The brewer has said that even without the flotation of a minority stake in the Asian division Budweiser APAC it will reduce its net debt to core earnings (EBITDA) ratio to below four times by the end of 2020 - from 4.6 at the end of 2018.

But the Hong Kong listing would almost have completed that task, bringing in $8-10 billion and reducing the ratio by up to 0.5 percentage points.

Refinitiv Eikon data show AB InBev's earnings steadily increasing in the coming years, with net debt dropping below $100 billion by the end of this year and the ratio to EBITDA declining to 4.2, followed by 3.7 and 3.2 in 2020 and 2021.

The growing prospect of a U.S. Federal Reserve interest rate cut may have eased the pressure on AB InBev, which would benefit from a weaker dollar, but it is still not plain sailing for the brewer.

Analysts at Jefferies said the slower rate of cutting debt could deter conservative investors and increased risks related to foreign exchange volatility - which has cost AB InBev $2.3 billion since 2016 - just short of the cost savings from its $100 billion plus takeover of SABMiller.

AB InBev has relied on a combination of acquisitions and related savings with broader cost-cutting to boost profits, but has recognised in the past year that it needs to put more emphasis on selling greater beer volumes.

Sales in the United States, its largest market, continue to fall, although at a slower pace. It has increased its marketing efforts - such as a record spend at this year's Super Bowl - and adopted a more regional focus.

In developing markets, the company is pushing higher priced "premium beers" harder. Sales of Budweiser, for example, are higher now in China than in the brand's U.S. home market.

The 2016 purchase of nearest rival SABMiller, which pushed AB InBev's net debt above $100 billion, has yielded profitable markets in Latin America, such as Colombia, but challenges in South Africa.

AB InBev itself described the Asian flotation less as a debt-reduction tool and more as a means to create a regional champion to drive local consolidation.

The company did not mention would-be partners, but analysts believed the Asian business could have tied up with ThaiBev's brewing business or San Miguel of the Philippines. Such partnerships are now less likely.

AB InBev said on Friday it had cancelled the Asian listing due to factors including market conditions, though sources familiar with the deal have said it was the high valuation that deterred investors. AB InBev declined to comment further.

The company could work to make Asia even more attractive. Trevor Stirling, analyst at Bernstein Securities, suggested brewing Corona lager locally, rather than importing from Mexico, as one way to boost margins.

Otherwise, the implication is that, unless the brewer cuts its asking price - something it was unwilling to do last week - the Asian IPO is cancelled not postponed.