By Marcelo Rochabrun and Anthony Esposito SAO PAULO/MEXICO CITY (Reuters) - Auto production in Mexico and Brazil, Latin America's top producers, plunged by an unprecedented 99% in April as a result of the coronavirus crisis, with the two countries building a total of just 5,569 vehicles. In normal times, Mexico and Brazil produce over half a million cars a month combined. The industry accounts for hundreds of thousands of jobs and several percentage points of their respective countries' gross domestic products. 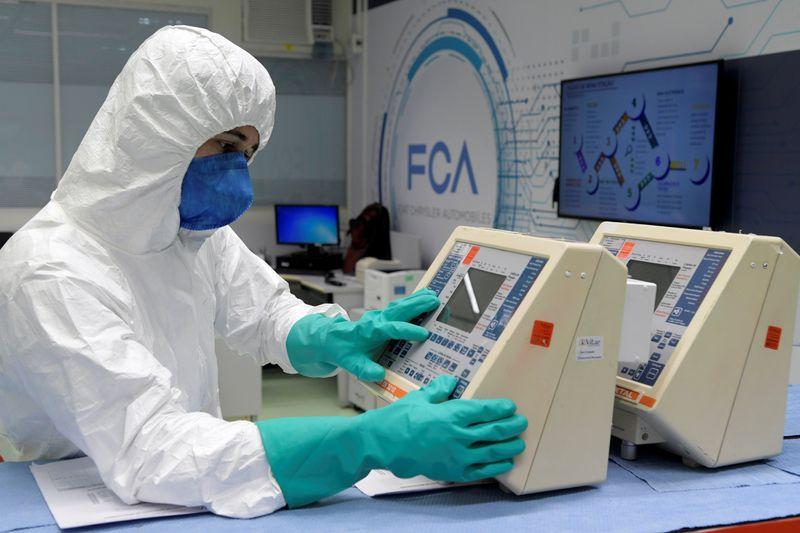 By Marcelo Rochabrun and Anthony Esposito

SAO PAULO/MEXICO CITY (Reuters) - Auto production in Mexico and Brazil, Latin America's top producers, plunged by an unprecedented 99% in April as a result of the coronavirus crisis, with the two countries building a total of just 5,569 vehicles.

In normal times, Mexico and Brazil produce over half a million cars a month combined. The industry accounts for hundreds of thousands of jobs and several percentage points of their respective countries' gross domestic products.

The statements on production, made on Friday by Mexico's Inegi statistics association and Brazil's Anfavea automakers association, are the first available window into the sheer extent of the crisis for automakers in Latin America.

The coronavirus pandemic is putting jobs in peril and raising questions about the sustainability of the industry's international supply chains, much of which go back to China. The poor results may also be used by auto executives to obtain government aid.

Both countries have so far avoided layoffs but much hinges on when production can restart and whether there will be any demand for cars once that happens. Mexico could tentatively restart production on May 18, while Brazil's top automakers are eyeing a June restart.

Mexico and Brazil are key bases for global automakers, including General Motors Co

April shipments from Mexico, which is more dependent on exports to the United States, fell by 90% compared with March to just 27,889 vehicles, Mexico's Inegi said.

Brazil is more focused on its domestic market but is a significant exporter to Argentina. Exports fell by 77%, Anfavea said, to 7,200 units.

Sales overall plummeted by two-thirds in Brazil to 55,700 units. Mexico did not disclose sales numbers.

In Brazil, the coronavirus pandemic is deepening a years-long crisis from which the industry was already struggling to recover.

Brazil has the capacity to produce more than 400,000 cars per month, due to expensive bets made just before the country underwent its worst economic crisis on record in 2016.

The coronavirus crisis may well exceed the damages caused then, from which the auto industry never fully recovered.

Automakers there are negotiating a government aid package that was initially expected to have been resolved by now.

One pending issue is what will be used as collateral for any loans.

Moraes told reporters that automakers are proposing to use as collateral some 25 billion reais' ($4.34 billion) worth of tax credits the automakers have not been able to take advantage of.

The loans would be issued by private banks, Moraes said, but secured by Brazilian state bank BNDES, which would itself be secured by those tax credits.

The proposal was presented on Wednesday, he said, and the automakers are still awaiting a reply from the government.

(Reporting by Marcelo Rochabrun in Sao Paulo and Anthony Esposito in Mexico City; Editing by Dan Grebler and Matthew Lewis)