The gruesome attack on a woman at a Bangalore ATM has brought to focus the issue of security at such kiosks. The incident has sent shock waves across the country as over the last few years ATMs have become one of the most dependable modes to make financial transactions for everybody from the lower to upper classes, especially in urban areas.

As of August 2013, there are about 1.2 lakh ATMs in the country, operated by banks. This ToI report citing data from the Reserve Bank of India says on an average Rs 4.8 lakh is withdrawn through 167 transactions per machine per day.

The RBI has been devising ways to encourage the usage of such machines, which it thinks have modified behavioural strategies in the domain of personal banking in the country. 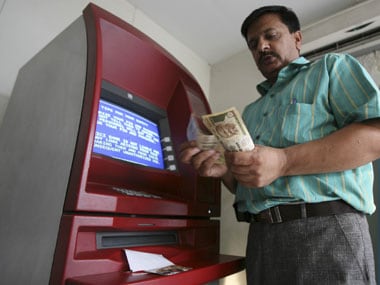 Representational pic of a person using an ATM. Reuters

As part of this objective, the RBI last year issued guidelines on white label ATMs, which are operated by non-bank entities. In short, ATMs are going to be ubiquitous in the country. People across rural and urban settings will be encouraged to make use of ATMs as they start rendering a wide variety of services.

The issue of security at an ATM becomes a major issue in this backdrop. After the unfortunate Bangalore incident, which took place in an unguarded ATM, it is natural that there is a clamour for tighter security at ATMs.

But just how fair is it to put the onus to provide security solely on banks?

To answer this question first we need to understand the ATM model.

Investopedia defines an ATM as "an electronic banking outlet, which allows customers to complete basic transactions without the aid of a branch representative or teller".

Meanwhile, the RBI defines them as "a computerized machine that provides the customers of banks the facility of accessing their account for dispensing cash and to carry out other financial & non-financial transactions without the need to actually visit their bank branch".

Essentially, they are self service kiosks, where you can make quick transactions which otherwise in a bank branch would sometimes take hours to accomplish.

This is so especially in India, where transaction in a physical branch is painfully slow despite the implementation of core banking solutions by (or computarisation of) most of the banks. So from the customers' point of view, ATMs have been a major win.

For banks, meanwhile, the machines are extended delivery channels. They remain open 24 hours offering many important but minor services. But there is also a cost attached to setting up of an ATM.

The machine itself can cost upwards of Rs 3-4 lakh. And then there is the real estate cost which is fairly high in India. Above all, there are the maintenance charges.

This Hindu BusinessLine report puts the cost of setting up an ATM at Rs 5-6 lakh. The monthly cost of maintaining the kiosk, the electricity charges and the rentals is anywhere between Rs 10,000 and Rs 50,000, the report says. Add to this the cost for providing 24-hour security and the cost of maintenance shoots up further.

Rightly, a senior official in a public sector bank, says in this report in The Hindu if banks were to provide high-level security day and night, it would make the business model of an ATM unviable. According to him, the salary for just one security guard will be Rs 10,000. Round-the-clock security means the bank will have to engage three guards.

Putting the responsibility to provide security at ATMs on banks may be easy. But that surely is not the right way out.

The usage of ATMs (which are also loosely called anytime money machines) are going to be on the rise. So, responsibility for providing security needs to be fixed.

At Bangalore, the attack happened in an ATM which is situated about 5 meters away from the bank. Shockingly, it is also near a police station. And it happened in the board day light. It is chilling.

It reminds us that we are vulnerable even in public places. And public safety is the government's responsility.