By Shinichi Saoshiro TOKYO (Reuters) - Asian stocks struggled on Friday to track Wall Street's exuberance about a possible U.S. rate cut next month as anxiety over Sino-U.S. trade negotiations clouded the investor mood in the region 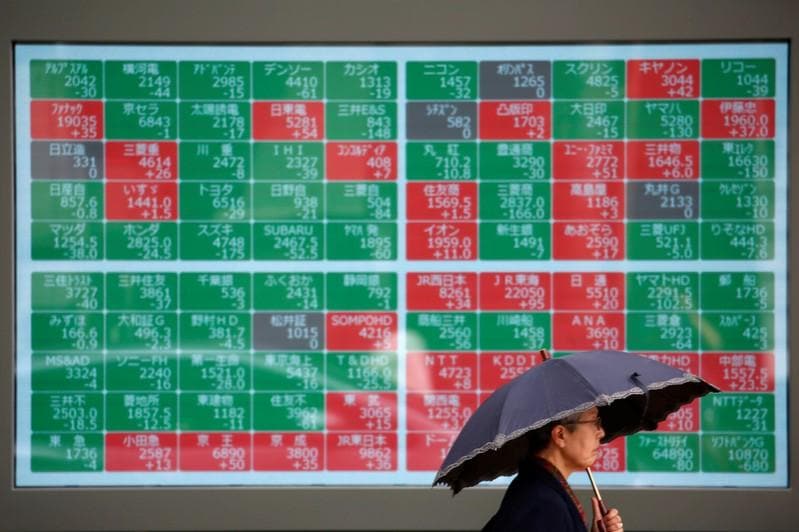 TOKYO (Reuters) - Asian stocks struggled on Friday to track Wall Street's exuberance about a possible U.S. rate cut next month as anxiety over Sino-U.S. trade negotiations clouded the investor mood in the region.

Also tempering appetite in Asia were fresh worries about Middle East tensions, after Iran shot down a U.S. military drone, raising fears of a military confrontation between Tehran and Washington and pushing the crude oil price higher.

MSCI's broadest index of Asia-Pacific shares outside Japan rose 0.1%. The index was up 4% on the week, during which it brushed its highest level since May 8.

Japan's Nikkei was flat, capped by the yen's big surge.

The S&P 500 hit a record high on Thursday after this week's Federal Reserve meeting boosted expectations that the central bank will cut interest rates as soon as next month to keep the U.S.-China trade war from stalling economic growth.[.N]

The Fed signalled easing after the conclusion of its policy setting meeting on Wednesday, saying it was ready to battle growing global and domestic economic risks.

"There is no doubt that this week's FOMC meeting outcome is positive for the financial markets including those in Asia," said Kota Hirayama, senior emerging market economist at SMBC Nikko Securities in Tokyo.

"That said, the FOMC alone won't be able to sustain Asian equities indefinitely until some kind of solution can be worked out for the U.S.-China trade war at the G20, since the region is particularly vulnerable to the conflict."

Investors have pinned hopes on the United States and China reaching some sort of compromise at the sidelines of the G20 summit in Japan on June 28-29.

In currency markets, the prospect of U.S. interest rates being lowered put the dollar squarely on the defensive.

The dollar index against a basket of six major currencies struggled near a two-week low of 96.567 brushed the previous day. The index has fallen roughly 1% this week.

The greenback has fallen 1.1% versus the yen this week and traded near a six-month low of 107.21 yen.

With the Fed expected to ease policy soon, and with other central banks such as the European Central Bank and the Bank of Japan seen following in their wake, government bonds were on a bullish footing.

The German 10-year bund yield touched a record low of minus 0.329% this week while Japan's 10-year yield fell to a near three-year trough of minus 0.185% overnight.

Crude oil rose to three-week highs after Iran shot down a U.S. military drone, raising fears of about fresh conflict in the Middle East. [O/R]