SHANGHAI (Reuters) - Asian shares wobbled in early Friday trade, struggling to shake off the previous day's global markets rout, after weak results from tech giants Alphabet Inc and Amazon.com heightened concerns over world trade and economic growth. The shaky start for regional bourses came despite a bounce on Wall Street overnight, which was helped by bargain-hunting and positive earnings from Microsoft Corp. Those gains were put into perspective, however, as shares of both Amazon.com Inc and Alphabet Inc fell sharply after the closing bell on disappointing earnings 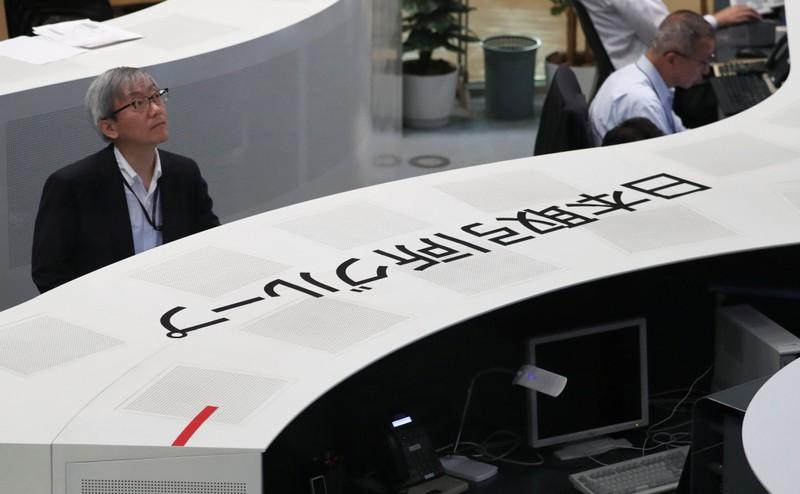 The shaky start for regional bourses came despite a bounce on Wall Street overnight, which was helped by bargain-hunting and positive earnings from Microsoft Corp.

Those gains were put into perspective, however, as shares of both Amazon.com Inc and Alphabet Inc fell sharply after the closing bell on disappointing earnings.

Predictably, the Nasdaq futures turned down 0.9 percent and S&P E-mini futures fell 0.6 percent, underscoring broad worries about U.S. corporate earnings, and the outlook for the economy, which triggered a rout on Wall Street on Wednesday and sent global markets into a tailspin.

In Asia, MSCI's broadest index of Asia-Pacific shares outside Japan was flat after pushing slightly lower in the opening hour.

The index has been bruised by a heavy sell-off in the past several days, tumbling more than 3 percent this week.

South Korea's Kospi was also down 0.6 percent, and Australia's shares were hanging on to modest gains of 0.2 percent. Japan's Nikkei stock index was the biggest gainer, up 0.5 percent, though that only partially erased Thursday's 3.7 percent slide.

Financial markets have been whipsawed in recent sessions on concerns over global growth as investors fretted over Sino-U.S. trade frictions, a mixed bag of U.S. corporate earnings, Federal Reserve rate hikes and Italian budget woes. A slowdown in China has been particularly worrying for policy makers and investors, hitting asset markets from stocks to currencies and commodities.

Analysts at Capital Economics sounded a cautious note, suggesting that the bounce in the S&P 500 index on Thursday was only temporary as investors worries about the economic outlook worsen.

"The first, and most important (worry) is that Fed tightening and fading fiscal stimulus will cause the US economy to take a turn for the worse ... The second is that China's economy will continue to struggle," the analysts said in a note to clients.

"As we have been arguing for a while now, these worries are likely to get worse over the next twelve months or so."

Investors will get a chance to check the U.S. economic pulse later Friday when the government releases third-quarter GDP data.

ANZ analysts highlighted weak U.S. core durable goods data as suggesting that "investment is not taking off, even with the apparent tailwind from tax cuts and USD repatriation."

"This indicates that the boost to GDP growth from the fiscal stimulus could be fairly transitory," the analysts said.

The dollar dropped 0.1 percent against the yen to 112.29. The dollar index, which tracks the greenback against a basket of six major rivals, was also 0.1 percent lower at 96.594.

The yield on benchmark 10-year Treasury notes rose to 3.1073 percent compared with its U.S. close of 3.136 percent on Thursday.

Oil prices gave up some ground after earlier rising on signals from Saudi Arabia's energy minister that there could be a need for intervention to reduce oil stockpiles.