By Chibuike Oguh NEW YORK (Reuters) - Asian stocks opened mostly higher on Wednesday, tracking modest Wall Street gains as prospects of an eventual victory against coronavirus shored up recovery hopes, while tight supply expectations pushed oil prices to their highest in a year. Investors were betting that the incoming Biden administration would ramp up U.S. 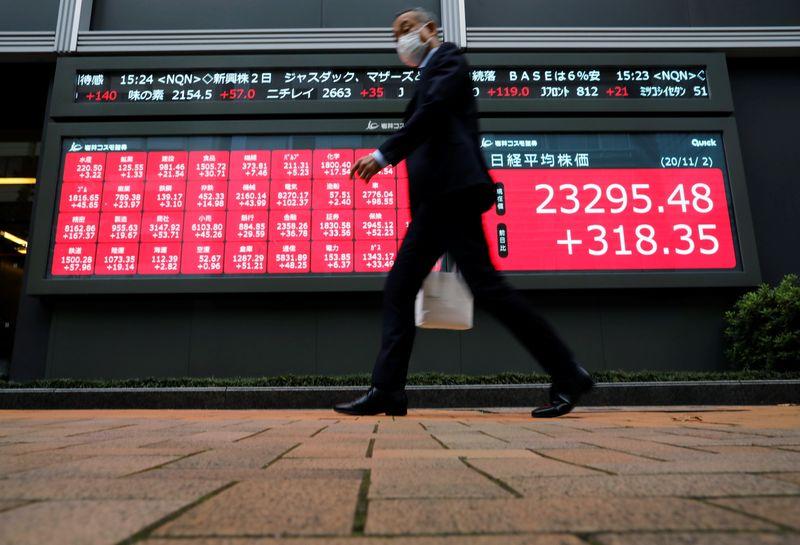 Investors were betting that the incoming Biden administration would ramp up U.S. distribution of coronavirus vaccines, which would allow large parts of the U.S. economy to reopen, Peter Essele, head of portfolio management at Commonwealth Financial Network in Boston said.

"The amount of pent-up demand is slowly being unwound and over the next year it is probably going to result in one the strongest growth in 20 years and markets are pricing that in," Essele said.

The 10-year U.S. yield touched its highest since March but tightened to near flat on the day after a Treasury auction was well-bid. The yield had risen sharply this year on expectations of a massive stimulus package from the incoming Democratic administration.

Democrats said they will give Republican President Donald Trump one last chance on Tuesday to leave office days before his term expires or face an unprecedented second impeachment over his supporters' deadly Jan. 6 assault on the U.S. Capitol.

An impeachment trial could proceed even after Trump leaves office on Jan. 20. But analysts say they don't expect any further political turmoil in Washington to affect markets.

"Markets since the election have been quite strong because uncertainty factor has been removed," Essele said.

In oil markets, Brent crude prices hit their highest since February as tighter supply and expectations of a drop in U.S. inventories offset concerns over rising COVID-19 cases globally. Saudi Arabia said it plans to cut output by an extra 1 million barrels per day in February and March.

The U.S. dollar was down a day after hitting its highest since December, and the tighter Treasury yields pushed the greenback down further.