By Swati Pandey SYDNEY (Reuters) - Asian shares rose on Monday to a three-month high as risk assets got a fillip from hopes of a U.S.-China trade deal as soon as next month while the dollar marked time as focus shifts to a U.S. rate decision. In early Asian trades, MSCI's broadest index of Asia-Pacific shares outside Japan added 0.2% for its third straight day of gains to 518.29, the highest since late July. 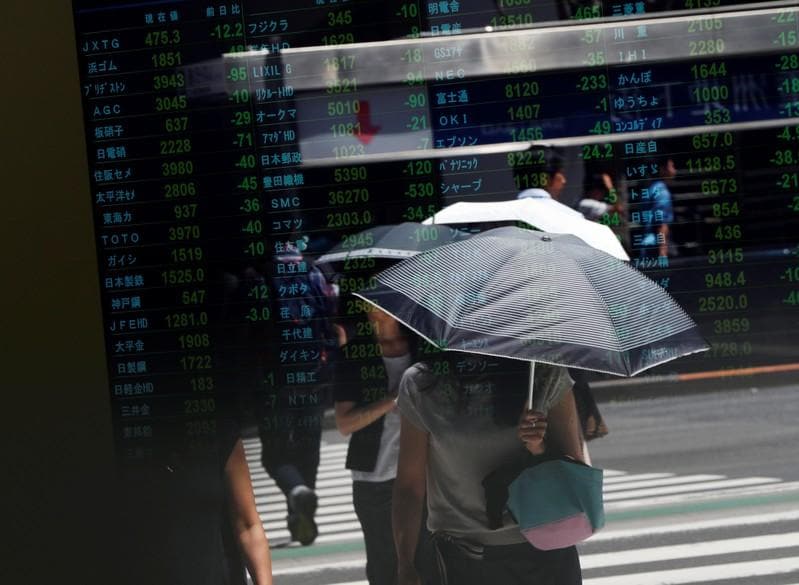 SYDNEY (Reuters) - Asian shares rose on Monday to a three-month high as risk assets got a fillip from hopes of a U.S.-China trade deal as soon as next month while the dollar marked time as focus shifts to a U.S. rate decision.

In early Asian trades, MSCI's broadest index of Asia-Pacific shares outside Japan <.MIAPJ0000PUS> added 0.2% for its third straight day of gains to 518.29, the highest since late July.

The gains came after a positive session in U.S. and European markets on Friday.

U.S. and Chinese officials are "close to finalising" some parts of a trade agreement after high-level telephone discussions on Friday, the U.S. Trade Representative's office and China's Commerce Ministry said, with talks to continue.

The protracted trade war between the world's largest economies has hurt manufacturing activity, exports and business confidence globally while denting profits of many major industrial firms.

Optimism that Beijing and Washington were finally close to resolving their dispute led the S&P500 <.SPX> to surpass its July 26 closing record of 3,025.86, though it ended a tad below that level on Friday. The S&P 500's total return index <.SPXT> posted an all-time high.

Strong results from companies including Intel

Investors next await earnings from the likes of Alphabet Inc

Activity later in the week will be dominated by the U.S. Federal Reserve, which markets expect is all but certain to lower interest rates at its Wednesday meeting.

The Bank of Japan meets on Thursday. On Friday, indicators for Chinese and U.S. manufacturing will be released.

"We also think the risk is the FOMC will articulate a pause," for future rate decisions, Grace added.

"That means the 27.6% pricing for an additional 25 bps cut in December will quickly evaporate, sending U.S. yields and the USD higher."

In currencies, the dollar index <.DXY> was unchanged at 97.822 against a basket of six major currencies. The Japanese yen was a tad lower at 108.72.

The European Union agreed to London's request for a Brexit deadline extension but set no new departure date. That gave Britain's divided parliament time to decide on Prime Minister Boris Johnson's call for a snap election.

Earlier, sources told Reuters the 27 European Union countries that will remain after Brexit hope to agree on Monday to delay Britain's divorce until Jan. 31 with an earlier departure possible.

"It feels like the calm before a potential storm, where the event risk heats up with political twists and turns, key economic data and central bank meetings," said Chris Weston, Sydney-based strategist at Pepperstone.

Oil prices climbed, supported by optimism on the trade front and by falling U.S. crude stocks.