NEW YORK (Reuters) - A gauge of Asian shares was set to cling to a near three-year peak while the dollar stayed sluggish on Friday as the prospect of a divided U.S. legislature dimmed the chance of major policy changes, lifting risk appetite. Brushing aside the uncertainty of an exceedingly close U.S. 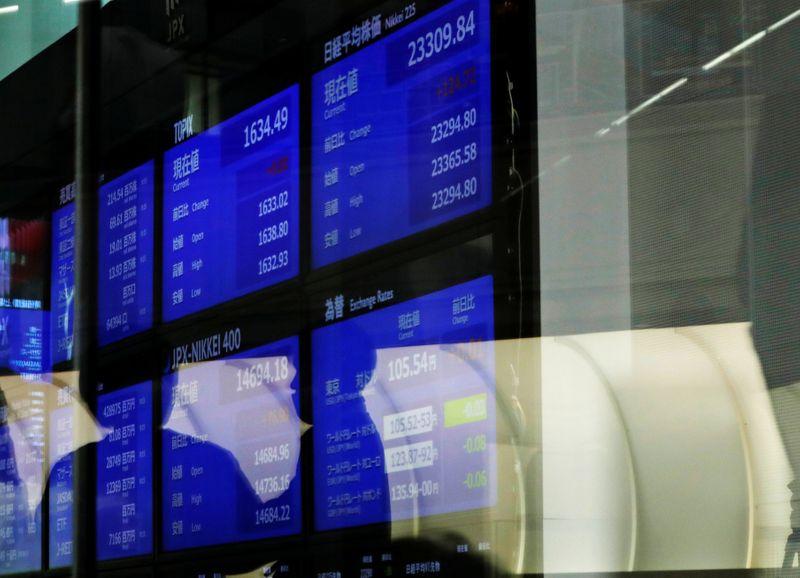 NEW YORK (Reuters) - A gauge of Asian shares was set to cling to a near three-year peak while the dollar stayed sluggish on Friday as the prospect of a divided U.S. legislature dimmed the chance of major policy changes, lifting risk appetite.

Brushing aside the uncertainty of an exceedingly close U.S. presidential election, investors overnight snapped up riskier assets such as the Australian dollar

Even gold, a traditional safe-haven asset, rallied overnight as investors looked forward to the conclusion of the U.S. election as a precursor to more fiscal stimulus in the world's largest economy.

Australian shares <.AXJO> jumped 0.7% and MSCI's broadest index of Asia-Pacific shares outside Japan <.MIAPJ0000PUS> added 0.22% to a level last seen in February 2018. But in a sign gains may be limited, Japan's Nikkei futures

Democrat Joe Biden crept closer to victory over U.S. President Donald Trump on Thursday by leading with razor-thin margins in a handful of states where votes are still being counted.

Though it is not clear who will emerge the winner in the presidential race, analysts said more U.S. fiscal stimulus is on the cards, regardless of the election outcome.

"We still anticipate that there will be a fiscal package in excess of $1 trillion next year," said James Knightley, chief international economist at ING Group.

"This stimulus, when combined with a long-anticipated COVID-19

vaccine, can really lift the economy and drive growth. We consequently remain very upbeat on the prospects for 2021 and 2022."

Analysts increasingly expect the U.S. legislature to be split, with the Democrats controlling the House of Representatives, while the Republicans retain control of the Senate.

The upbeat mood took its toll on the dollar <=USD>, which was sluggish at 92.530 against a basket of six currencies after hitting a two-week low overnight. [USD/]

A promise by the Federal Reserve on Thursday to keep its monetary policy loose and do whatever it takes to sustain an unsteady U.S. economic recovery also weighed on the dollar.

Oil prices were sluggish after a bout of profit-taking in early trade. Brent crude