By Tomo Uetake Tokyo (Reuters) - Asian shares hobbled near four-month lows on Friday and crude oil plunged on worries the U.S.-China trade spat was developing into a more entrenched strategic dispute between the world's two largest economies, pushing investors to safe-haven assets. MSCI's broadest index of Asia-Pacific shares outside Japan stood flat, hovering near its fresh four-month low marked on Thursday, and was on track for a third straight weekly loss, down 0.9% so far on the week. Japan's Nikkei average dropped 0.6%. 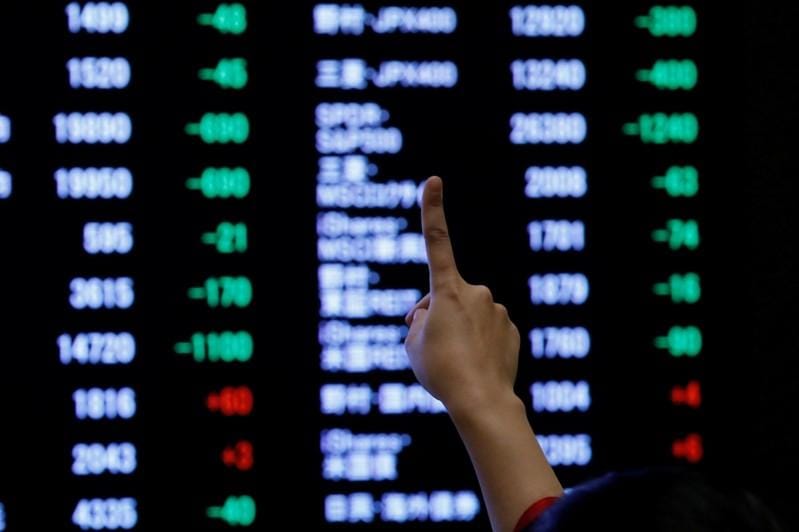 MSCI's broadest index of Asia-Pacific shares outside Japan stood flat, hovering near its fresh four-month low marked on Thursday, and was on track for a third straight weekly loss, down 0.9% so far on the week.

U.S. President Donald Trump said on Thursday that Washington's complaints against Huawei Technologies might be resolved within the framework of a U.S.-China trade deal, while at the same time calling the Chinese telecommunications giant "very dangerous."

As flight-to-safety plays dominated the global markets, the benchmark 10-year U.S. Treasury note yield hit 2.292%, the lowest level since mid-October, 2017, with the key parts of the yield curve inverted.

"In the last couple of years, the PMI has had a very small gap with hard data, such as industrial output. So if that holds true this time, we could see factory production plunging into negative levels (compared to a year ago)."

"Since the global financial crisis, U.S. output has fallen only once: from 2015 to early 2016 when the shale industry was badly hit. Markets could start to fret over a global slowdown as they have done late last year."

The greenback at one point hit its highest level in two years against a basket of six major currencies and the euro slumped to levels last seen in May 2017 as a recovery in euro zone business activity was weaker than expected.

Sterling weakened again on Thursday as pressure mounted on British Prime Minister Theresa May to name a date for her departure after backlash over her last-ditch plans for Britain's exit from the European Union.

It was last traded at $1.2662, little changed on the day. The pound suffered its 14th consecutive day of losses against the euro on Thursday, its longest losing streak on record. It stood at 0.8830 pound to the euro.

Other major currencies were relatively calm, with the safe-haven yen still supported but not aggressively so.

In commodity markets, oil prices plunged on Thursday, with WTI crude losing nearly 6% as trade tensions dampened the demand outlook, putting the crude benchmarks on course for their biggest daily and weekly falls in six months.