By Koustav Samanta and Bozorgmehr Sharafedin SINGAPORE/LONDON (Reuters) - Asian refining margins for jet fuel turned positive for the first time in a month and European margins rose to the highest level in three weeks on Wednesday, bolstered by deep supply cuts and an uptick in flights in regional markets. 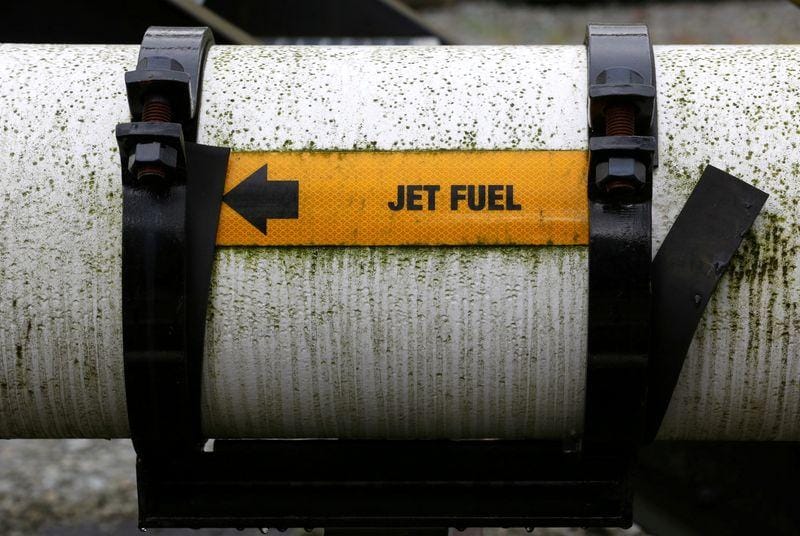 By Koustav Samanta and Bozorgmehr Sharafedin

SINGAPORE/LONDON (Reuters) - Asian refining margins for jet fuel turned positive for the first time in a month and European margins rose to the highest level in three weeks on Wednesday, bolstered by deep supply cuts and an uptick in flights in regional markets.

The jet fuel refining margin in Singapore flipped to $1.83 per barrel above Dubai crude on Tuesday, in positive territory for the first time since April 20.

Measures imposed to curb the spread of the coronavirus have caused jet fuel demand to plunge since February, leading to refining losses of as much as $7.23 a barrel on May 5.

"The jet fuel market in Asia has already hit a bottom, with some airlines even filing for bankruptcies ... I think the countries easing or removing their lockdowns would definitely help the market a bit," a Singapore-based trader said.

"But I'm not so optimistic that it can turn the market around or bring it to pre-pandemic level."

China Aviation Oil (CAO) has been bidding for jet fuel cargoes in the Singapore physical trade window this month, scooping 245,000 barrels in the last week, which represents half of the traded volumes in an otherwise subdued market.

Aviation is expected to take years to recover to pre-crisis levels as passengers to shy away from travel to avoid quarantine.

In Europe, refinery shutdowns, particularly in the Mediterranean, had led to a reduction in prompt jet fuel cargo offers, propping up prices.

A number of refineries have cut their jet fuel runs in favour of diesel and gasoline production, which still have stronger margins, traders and analysts said.

European profit margins rose to minus 35 cents on Wednesday, the highest in three weeks, although imports to the region in May hit the highest level in a year, according to Refinitiv data.

Also supporting the jet fuel margins was a gradual increase in the number of airline flights in the region.

"Countries across Europe are flying more and some airlines, such as Ryanair, have this week announced flying at a 40% capacity in July," said Selene Law, market editor at OPIS by IHS Markit.