By Wayne Cole SYDNEY (Reuters) - Asian markets skidded again on Tuesday after Wall Street suffered its biggest one-day loss since the 2008 financial crisis, but the selling was restrained by hopes for coordinated policy action to quell the panic. 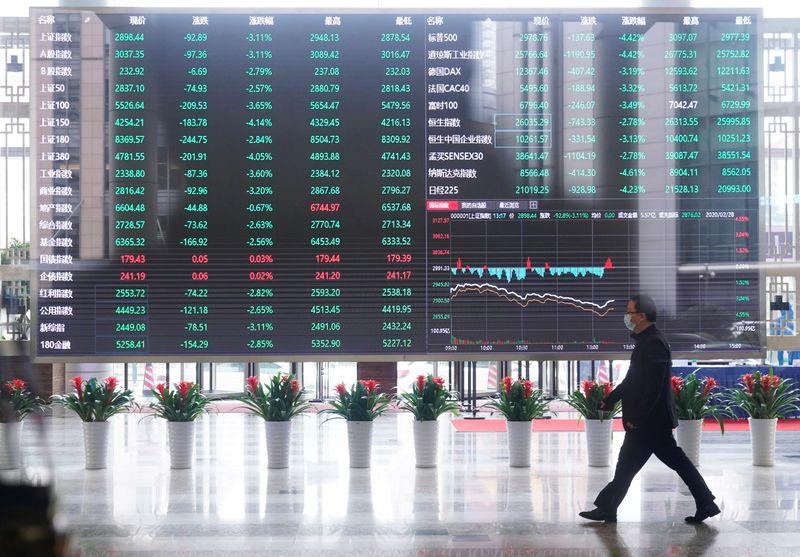 SYDNEY (Reuters) - Asian markets skidded again on Tuesday after Wall Street suffered its biggest one-day loss since the 2008 financial crisis, but the selling was restrained by hopes for coordinated policy action to quell the panic.

"The collapse in oil prices and associated credit concerns for producers have added another negative layer to a market already on its knees over the COVID-19 outbreak," said Rodrigo Catril, a senior FX strategist at National Australia Bank.

"Talk of coordinated fiscal and monetary support is getting louder," he added, noting U.S. President Donald Trump was promising "major" steps to support the economy.

Wall Street had been on the brink of a bear market with all the major indices down almost 20% from their all-time peak, which amazingly were touched just 13 sessions ago.

Headlines on the coronavirus were no brighter with Italy ordering everyone across the country not to move around other than for work and emergencies, while banning all public gatherings.

"Although uncertainty is very high, we now expect similar restrictions will be put in place across Europe in the coming weeks," warned economists at JPMorgan.

"We are now expecting a rolling 1H20 global growth contraction and a powerful global disinflationary wave to take hold," they added. "We expect the Fed to cut to zero at or before its March 18 meeting."

Such has been the conflagration of market wealth, that analysts assumed policy makers would have to react aggressively to prevent a self-fulfilling economic crisis.

"Without a circuit-breaker, there is a risk the volatility tightens global financial conditions and weakens economies," said Kim Mundy, an international economist at CBA.

"Because of the risks, we expect central banks to cut policy interest rates further as well as use other, unconventional, monetary policy tools."

The U.S. Federal Reserve on Monday sharply stepped up the size of its fund injections into markets to head off stress.

Having delivered an emergency rate cut only last week, investors are <0#FF:> fully pricing an easing of at least 75 basis points at the next Fed meeting on March 18, while a cut to near zero was now seen as likely by April.

Britain's finance minister is due to deliver his annual budget on Wednesday and there is much talk of coordinated stimulus with the Bank of England.

The European Central Bank meets on Thursday and will be under intense pressure to act, even though rates there are already deeply negative.

Bonds have charged ahead of the central banks to essentially price in a global recession of unknown length.

The dive in yields and Fed rate expectations had put an end to a multi-year uptrend for the dollar, though it was finding some support in early trading.