By Wayne Cole SYDNEY (Reuters) - Asian stocks took a breather at 18-month peaks on Wednesday having climbed for five straight sessions, while the British pound was licking its wounds as revived Brexit fears came back to bite it. MSCI's broadest index of Asia-Pacific shares outside Japan was dead flat in thin early trade, just off its highest since June last year. 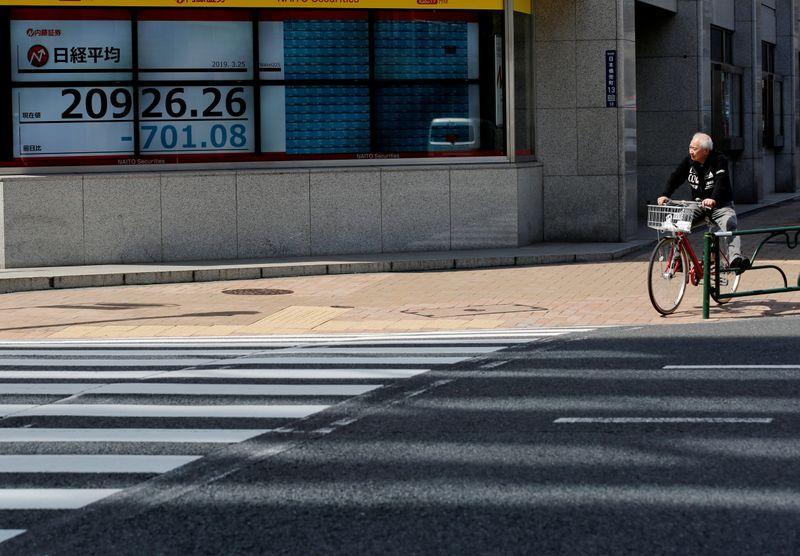 SYDNEY (Reuters) - Asian stocks took a breather at 18-month peaks on Wednesday having climbed for five straight sessions, while the British pound was licking its wounds as revived Brexit fears came back to bite it.

U.S. housing starts were surprisingly strong in November, and building permits rose to the highest level since May 2007. Manufacturing output picked up more than expected as a strike at General Motors Co

A run of better data recently has helped calm fears of recession while the phase one Sino-U.S. deal on trade seems to have lifted some of the uncertainty on the global outlook.

The sea change was clear in BofA Global Research's latest survey of fund managers with recession concerns diving 33 percentage points to a net 68% of investors saying a recession is now unlikely in 2020.

Yet it might be too soon to declare an all-clear on the political front with UK Prime Minister Boris Johnson upsetting markets by taking a hard line on Brexit talks.

Johnson will use the prospect of a Brexit cliff-edge at the end of 2020 to demand the EU give him a comprehensive free trade deal in less than 11 months.

The threat of a hard exit sent shivers through sterling, which slid 1.5% in its largest one-day fall this year.

"We treat the risk of a hard Brexit as a 'tail risk' at this stage," said Joseph Capurso, a senior currency strategist at CBA. "A UK‑EU trade deal by end 2020, while difficult, is still possible."

Sterling's slide gave the dollar index a lift to 97.184 <.DXY> against a basket of currencies, extending a bounce from last week's five-month low of 96.588.

The euro also surged on the pound