By Dave Sherwood and Fabian Cambero SANTIAGO (Reuters) - Chile's peso hit a historic low on Tuesday after government promises to rewrite the country's dictatorship-era constitution failed to quell anger on the street. 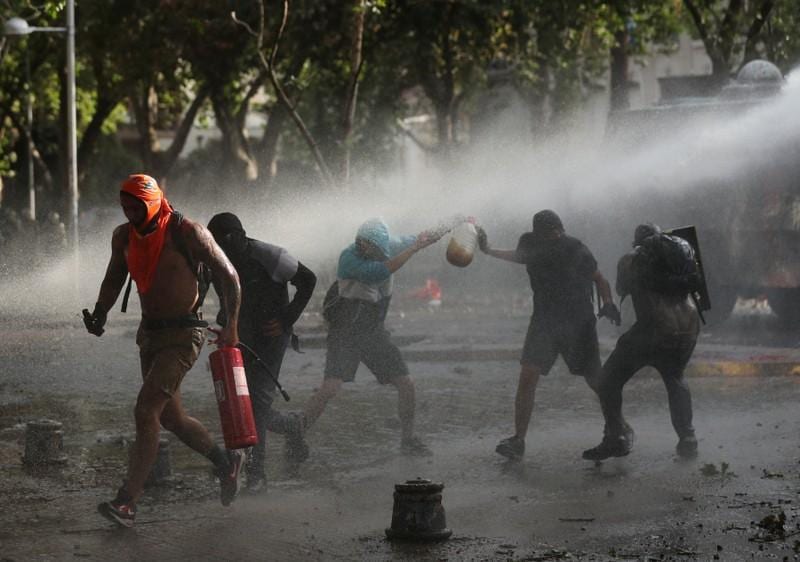 SANTIAGO (Reuters) - Chile's peso hit a historic low on Tuesday after government promises to rewrite the country's dictatorship-era constitution failed to quell anger on the street.

The country's currency plunged to more than 800 pesos per dollar, down more than 10 percent since mid-October, as weeks of rallies and strikes over inequality and social injustice began to take their toll.

The demonstrations have sometimes devolved into arson, riots and looting, leaving at least 20 dead and wreaking billions of dollars of damage to public infrastructure and private businesses. Vandals have hobbled Santiago's public transport system, destroying metro stations and burning buses.

He said the bank was willing to act in the face of "anomalous situations" and that it has "a variety of tools at its disposal to do this."

State workers and some unionized miners in Chile launched a massive, nationwide walk-off early on Tuesday, saying they were not yet satisfied following the government's decision to rewrite the country's heavily criticized dictatorship-era constitution.

Valentina Donoso, 21, a university student who pays for college by selling bread on the street, planned to join the rallies later in the day. She rejected the recent violence but said something still needed to give.

"I'm in favor of the protests and of making some noise. If you go to protest with white doves, nothing happens," she said.

Truck drivers and other protesters, meanwhile, had set up barricades Tuesday on at least two major highways connecting the capital Santiago with outlying cities and ports, prompting huge back-ups on key regional arteries.

The road blockages prompted the Valparaiso-based Congress to shut down for the day.

Most of Chile's copper mining companies said they had maintained their operations on Tuesday despite the protests, albeit with some delays and sporadic unrest, unions and management teams told Reuters.

To date, copper production in the world's largest producer of the red metal has not been significantly hurt by weeks of protests pushing demands for improvements in pensions, health and education.

Schools and businesses throughout the capital of 6 million people were largely closed, and construction workers scrambled to board up shops and restaurants in anticipation of continued riots.

Elsa Fuentes, 56, an empanada pastry seller, said she would not be joining the protests, shaking her head in disgust at the growing violence and destruction.

"People want everything for free and they have done a lot of damage," she said.

As protests mounted Tuesday morning, community and rights group leaders warned against abuses by the police.

Clashes with police and military security forces have escalated as protests have grown smaller but in some cases, more violent.

Prosecutors are investigating some 1,089 allegations of abuse, including torture, rape and beatings by security forces during demonstrations that have often degenerated into riots.

On Monday, a police officer allegedly shot a drama student from the University of Chile in the face, prompting near universal outrage.

Ennio Vivaldi, the rector of the University of Chile, said the university would soon file a legal complaint.

"Never again should there be an attack on a young man in the face with bullets from two meters away," he said. "This must stop."