As China's coronavirus outbreak eases, a wary return to shops for consumers

By Winni Zhou and Brenda Goh SHANGHAI (Reuters) - As shops shut their doors across Europe and the United States, in China the sharp drop in new coronavirus cases has encouraged consumers to venture back into malls and restaurants - for the most part quite gingerly but occasionally in throngs. Helping consumers return has been a loosening of quarantine and other restrictions on business and social activity. Restaurants that have satisfied authorities with plans for curbing the risk of infection are now allowed to serve groups of diners and most stores have reopened, though big brands like IKEA and Apple Inc have restrictions on crowds. 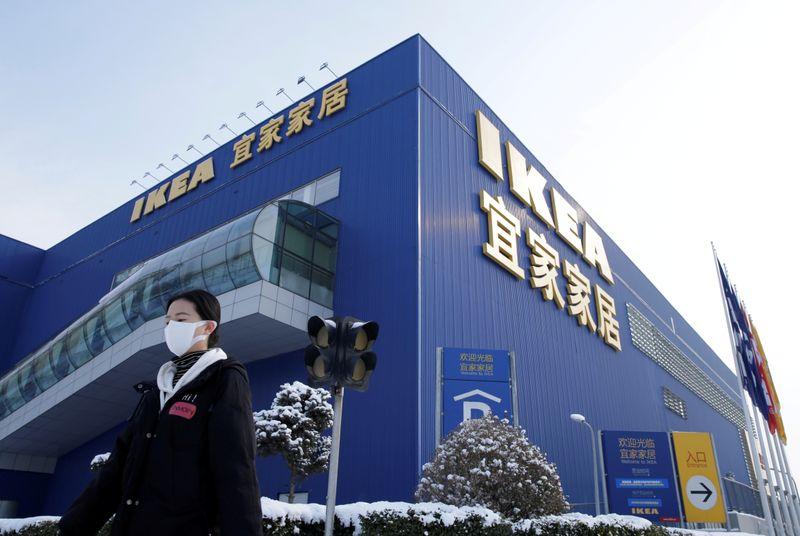 By Winni Zhou and Brenda Goh

SHANGHAI (Reuters) - As shops shut their doors across Europe and the United States, in China the sharp drop in new coronavirus cases has encouraged consumers to venture back into malls and restaurants - for the most part quite gingerly but occasionally in throngs.

Helping consumers return has been a loosening of quarantine and other restrictions on business and social activity. Restaurants that have satisfied authorities with plans for curbing the risk of infection are now allowed to serve groups of diners and most stores have reopened, though big brands like IKEA and Apple Inc

After being mostly cooped up at home for weeks, Chen Jiayi, a 21-year-old college student in Shanghai, said it was like coming up for air when she went out on Saturday to buy coffee and cake.

"There were quite a lot of people in the city centre, it was a completely different picture from the end of February. There were even queues at the bubble tea and biscuit shops," she said.

The epidemic, which has infected more than 800,000 in China and killed over 3,200, had kept hundreds of millions stuck at home since late January. Retail sales for the world's second-largest economy shrank by a fifth in the first two months of 2020 from a year earlier.

But new cases have dropped sharply of late. The number of daily new cases for mainland China fell below 100 for the first time on March 6 and daily totals this week have been around 20 or less, almost all involving travellers from abroad.

Getting Chinese consumer spending back on its feet again soon is seen as imperative for the health of the domestic economy and the many people whose livelihoods depend on the retail and restaurant sectors.

It is also key for many international brands that have already seen first-quarter earnings dented by the outbreak in China and are bracing for tumbling sales in western markets.

For some big popular brands, the response to reopening has been encouraging.

Hundreds of shoppers thronged Apple's stores on two main shopping streets in Shanghai over the weekend. IKEA, which opened three of its Beijing stores on March 8, saw high visitor numbers and queues as it implemented new social distancing rules such as only four people per elevator, state media reported.

And hotpot restaurants in the central city of Chongqing, where the dish is much beloved, were inundated with customers after they were allowed to reopen, with reported waiting times of 6 to 8 hours, TV broadcasts showed.

That said, the appetite to get out and spend is far from robust and many shops are still quite empty while some restaurants remain shut.

At the upscale Jing'an Kerry Centre mall in Shanghai this week, store assistants were arranging stock or looking at their phones amid a dearth of walk-in customers. And at the Gemdale Plaza mall in Beijing, only three of 10 restaurants on its top floor were open at Tuesday lunchtime.

Many Chinese say they remain worried about the possibility of new infections as more people return to work. They are also reluctant to spend much, fretting about job security and potential cuts to wages as the economy struggles.

"This has certainly been a fragile time in the psyche of Chinese consumers with all the fear and anxieties caused by uncertainty and information overflow," said Derek Deng, partner at consultancy firm Bain & Company in Shanghai.

To encourage spending, some businesses have embarked on promotions offering discounts or gifts to customers upon reopening. Haidilao <6862.HK>, a popular hotpot restaurant chain, gave away bags of soup stock and snacks to diners.

Local authorities in several provinces are also asking Communist Party officials to set an example by spending on food and shopping, and encouraging their friends and family to do the same. Some provinces are handing out coupons to the public to spend on food and books.

A Bain report predicts a post-epidemic consumption recovery will "largely follow patterns similar" to the 2002-2003 SARS outbreak. Then spending on food and cosmetics saw a quick return to normal while demand for clothing surged beyond pre-epidemic levels.

But just when a full recovery will happen remains unclear.

"Consumer sentiment is still in the process of returning from panic to normal or a new normal," said Deng.

It also remains to be seen whether the epidemic will have a long-lasting impact on how consumers shop with some analysts speculating that online ordering and deliveries will become even more entrenched.

Emma Wang, a film producer in Beijing, said she regularly goes outside to walk her dog but does not feel any pent-up need to go shopping amid uncertain economic times.

"Personally, I am not thinking of rushing to the malls now. I have Hema supermarket for all daily essentials delivered to my apartment," she said, referring to Alibaba Group Holding's