By Eliana Raszewski and Hugh Bronstein BUENOS AIRES (Reuters) - Argentina will negotiate with holders of its international bonds and the International Monetary Fund to extend the maturities of its debt obligations, as a way of ensuring the country's ability to pay, Treasury Minister Hernan Lacunza said on Wednesday. 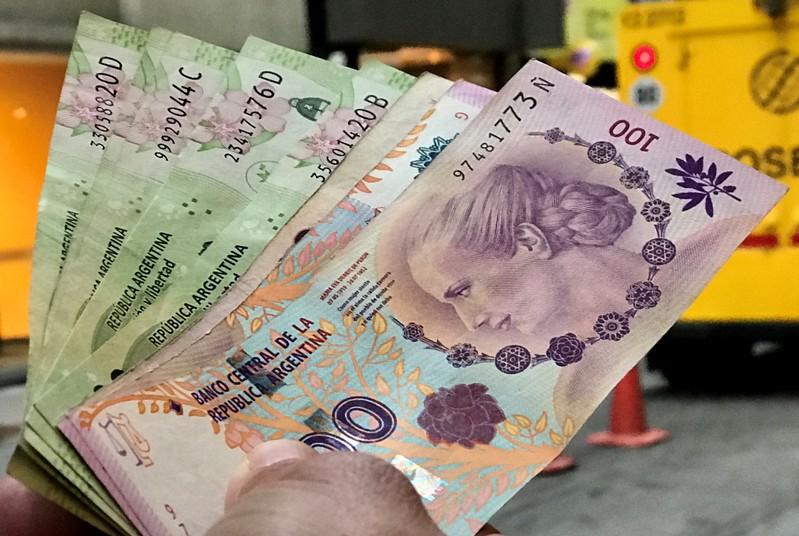 By Eliana Raszewski and Hugh Bronstein

BUENOS AIRES (Reuters) - Argentina will negotiate with holders of its international bonds and the International Monetary Fund to extend the maturities of its debt obligations, as a way of ensuring the country's ability to pay, Treasury Minister Hernan Lacunza said on Wednesday.

At a press conference after meetings with an IMF team visiting Argentina, Lacunza said the government would "re-profile" the maturities of debt owed to the IMF under a $57 billion standby agreement. He said interest and principal payments will not be altered in the re-profiling.

"The priority today is to guarantee stability, because it is useless to launch reactivating measures if there is no stability. The first thing is to recover that stability," Lacunza said at the press conference in Buenos Aires.

Lacunza, who was sworn in as Treasury minister last week, and central bank President Guido Sandleris met with the IMF team on Wednesday. The peso took a beating during the day, even though the central bank heavily intervened in the foreign exchange market for the second consecutive day.

Argentine asset prices have gotten slammed since the Aug. 11 primary election showed business-friendly President Mauricio Macri has surprisingly little public support in his campaign to win a second term in the October general election. He was trounced in the primary by center-left Peronist challenger Alberto Fernandez, who is now the clear front-runner.

"President Macri instructed me to solve the short-term problem to guarantee electoral stability, but also in the medium and long term so as not to leave a problem for the person who follows, be it he or another candidate," Lacunza said.

He said the measures were taken "so that the president can deploy his policies without the restriction of imminent, or too high, debt maturities."

Argentina's peso closed 3.1% weaker at 58.1 per dollar on Wednesday, even as the central bank sold $367 million of its reserves in a second consecutive day of heavy intervention aimed at controlling the peso's fall.

Worries over Argentina's ability to meet its dollar-denominated debt obligations have increased since the Aug. 11 primary. The peso has lost almost 22% of its value against the U.S. dollar since then.