By Jorge Otaola and Scott Squires BUENOS AIRES (Reuters) - Argentina's central bank governor unexpectedly resigned on Tuesday in the midst of negotiations with the International Monetary Fund, upsetting President Mauricio Macri's efforts to restore investor confidence and sending the peso sliding. Luis Caputo's resignation after just three months in the role came as a nationwide strike by unions shuttered public transit and ports across Argentina in protest at runaway inflation and austerity measures imposed by Macri to shore up government finances 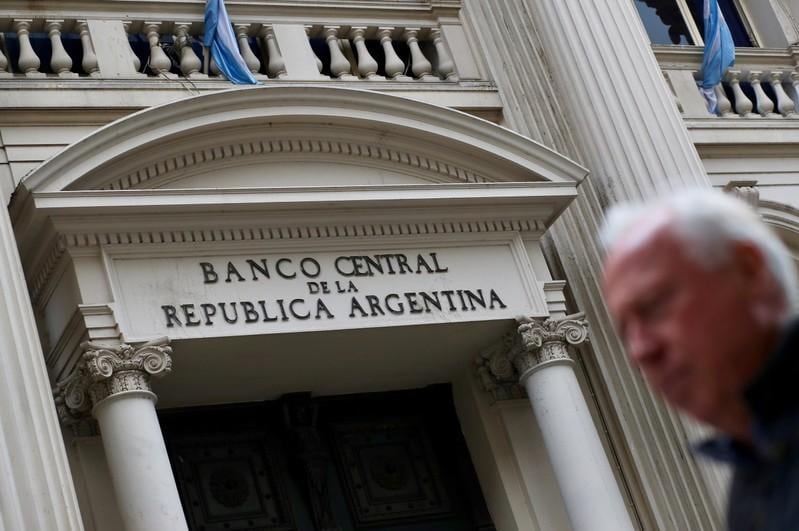 By Jorge Otaola and Scott Squires

Luis Caputo's resignation after just three months in the role came as a nationwide strike by unions shuttered public transit and ports across Argentina in protest at runaway inflation and austerity measures imposed by Macri to shore up government finances.

Former Economic Policy Secretary Guido Sandleris, an economist with a doctorate from Columbia University, was named as Caputo's replacement.

At the centre of recent emerging market jitters, Argentina has seen its peso currency lose more than 50 percent of its value so far this year amid worries about the government's ability to pay its foreign debts.

Macri's government has struggled to tame inflation expected to top 40 percent this year, driven by the peso's tailspin. Argentina's economic woes have been exacerbated by a severe drought this year that crippled the vital grain export sector.

"The main objective of the central bank is to reduce inflation," Sandleris said in a statement, adding that the bank under his leadership would "work to recover the stability and predictability of prices".

The run on the peso led Argentina to secure a $50 billion credit line from the IMF in June, negotiations in which Sandleris was involved, but a subsequent slide in the currency forced the government last month to request further support from the Fund.

After meeting with Macri in New York on Tuesday, IMF Managing Director Christine Lagarde said the Fund was "close to the finishing line" in reaching a new deal with Argentina.

Economy Minister Nicolas Dujovne told reporters on the sidelines of the United Nations' General Assembly that a deal could be announced as soon as Wednesday. He threw his support behind Sandleris.

"Just as in the finance ministry we have been working to overcome the fiscal deficit...now in the central bank under Sandleris' leadership we will begin to defeat inflation," Dujovne said.

Caputo, a former finance minister whose appointment three months ago was supposed to restore investors' faith in monetary policy, was the second Argentine central bank president to resign this year.

"This resignation is due to personal reasons, with the conviction that a new agreement with the International Monetary Fund will reestablish confidence in the fiscal, financial, monetary and exchange rate situation," the central bank said in a statement.

The bank did not give further details, but Dujovne was reported by Argentine media to be at odds with Caputo in recent weeks over the handling of monetary policy. Sandleris, by contrast, is seen as a close ally of the economy minister.

A rise in the central bank benchmark interest rate to 60 percent in August has failed to stem the slide in the peso. Macri said on Monday that the revised IMF agreement would lay out a clear direction in monetary policy.

Local media have reported the government is considering introducing a trading band for the peso. Officials have declined to comment.

"The timing could not be worse for Argentina," said Paul Greer, Portfolio Manager, Fidelity Emerging Market Debt Fund. "Caputo's resignation will only add to investor uncertainty."

The Merval stock index <.MERV> rose more than 2 percent, led by energy stocks that price their sales in dollars.

The peso's volatility will likely continue until there is greater clarity on policy, said Delphos Investment in its daily report.

"Caputo's resignation could mean a reconfiguration of monetary and exchange rate policy in the framework of negotiations with the IMF," it said.