Analysis: Why Davos is talking about the fight between two absentees

By Simon Robinson DAVOS, Switzerland (Reuters) - The two most powerful men in the world are not in Davos this year, but they remain impossible to escape. In a sweeping speech at the World Economic Forum two years ago, President Xi Jinping argued that China was free trade's greatest champion. Any attempt to stop the flow of capital, technology, goods, industries or people between economies 'is simply not possible,' he said. 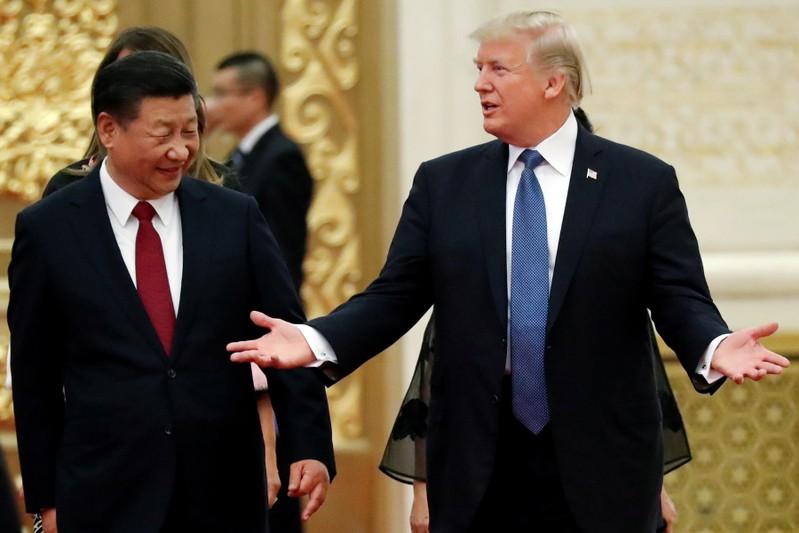 DAVOS, Switzerland (Reuters) - The two most powerful men in the world are not in Davos this year, but they remain impossible to escape.

In a sweeping speech at the World Economic Forum two years ago, President Xi Jinping argued that China was free trade's greatest champion. Any attempt to stop the flow of capital, technology, goods, industries or people between economies "is simply not possible," he said.

Then in January last year, President Donald Trump arrived at the Swiss ski village to deliver his own "simple message: There has never been a better time to hire, to build, to invest and to grow in the United States. America is open for business."

Washington was committed to free trade, he said. But "we cannot have free and open trade if some countries exploit the system at the expense of others."

Neither leader mentioned their superpower rival. But it was clear that in setting out their boundaries for how global trade should work, they were talking to each other.

If the last year is anything to go by, neither much listened. And the fallout from their falling out is why there's so much talk about Xi, Trump and trade at this year's Forum.

Carrie Lam, the Chief Executive of Hong Kong, told the audience at one session that some countries – she did not name which – were starting to pull away from the rules-based multilateral system built up over the past few decades. "If that is no longer the mainstream, we could be in trouble," she said.

Kevin Sneader, Global Managing Partner at McKinsey & Company, said that trade was just "one aspect of a broader tension between the U.S. and China."

Already, the trade war between the two biggest economies in the world has begun to crimp global growth, to reshape supply chains and corporate planning, and to hit countries from Canada to Singapore. The International Monetary Fund trimmed its growth forecasts on the eve of this year's Davos meeting, while a survey showed increasing pessimism among business chiefs.

In the real world, the effects have been felt for months.

Take Foxconn, which assembles Apple iPhones in China but now says it is considering building factories in Vietnam and India to help mitigate any impact from the trade war.

Or automakers, who are busy changing where they build certain models to account for increased tariffs.

Or countries such as Australia, whose currency, winemakers and home owners are all feeling the chill of the economic battle.

People want to know "how much has the economy slowed and from a trade perspective what are these tariffs and what impact are the trade discussions really having," said Citigroup CEO Michael Corbat in an interview with Reuters.

THE VIEW FROM WASHINGTON AND BEIJING

The U.S. delegation stayed at home this year thanks to the government shutdown. But Secretary of State Mike Pompeo spoke via video link. He began by describing China as belligerent towards its neighbours and "embracing totalitarianism" at home, but went on to say that Washington's issues with Beijing could be resolved if China accepted the principles of fair and open trade and protection of intellectual property.

A U.S. official, speaking in Washington a few days before the Davos conference, said that Trump's message at the event last year still applied. A lot of progress had been made, he said, citing the trade agreement with Canada and Mexico as one example.

The imposition of tariffs on China had got Beijing talking, he argued, a major development since last year's Davos.

In China, views are divided.

Tu Xinquan, a trade expert at Beijing's University of International Business and Economics, said the trade war may ultimately push China to open up further - even if this would not be easy.

When Xi spoke at Davos two years ago, he "was paying more attention to politics." The trade war could force China to focus on economics, he said.

However, a senior analyst at a major Chinese state-owned company told Reuters that Xi could never back down when confronted with U.S. demands for reform. Such a move would be more politically dangerous than navigating an economic downturn, the analyst said.

"If the Chinese government kneels down to the American president, it will give rise to intense dissatisfaction from the people, and it would be a major political loss within the government."