By Saikat Chatterjee, John Revill and David Lawder LONDON/ZURICH/WASHINGTON (Reuters) - Being named a currency manipulator by the U.S. 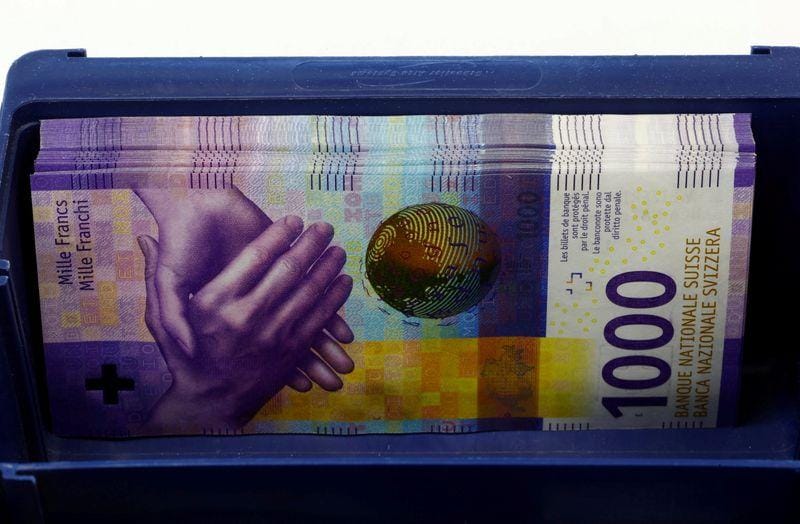 LONDON/ZURICH/WASHINGTON (Reuters) - Being named a currency manipulator by the U.S. Treasury may be an embarrassment for Switzerland, but the tag will likely have little effect on the Swiss National Bank's monetary policy.

The U.S. Treasury on Wednesday labeled Switzerland and Vietnam as currency manipulators, saying they had both intervened heavily in currency markets with at least part of Switzerland's action aimed at pushing down the Swiss franc to prevent effective balance of payments adjustments.

There would be no automatic punishment with a label, though U.S. law requires Washington to demand negotiations with designated countries.

“The subtle implication of being put on this list is that you eventually could come under sanctions, and that puts pressure on these countries not to weaken their currencies so much,” said Win Thin, global head of Currency Strategy at BBH, ahead of the report.

But he said that in Switzerland’s case, as the exchange rate is its main tool for fighting deflation, "they may say, ‘Well, tough’”.

The Swiss central bank is firmly under the Treasury's focus after spending 90 billion Swiss francs ($101.50 billion) on foreign currency intervention in the first half of 2020 amid pandemic-driven safe-haven inflows.

The SNB has long argued it is not trying to weaken the franc to gain a trade advantage. Instead, it aims only to stem the appreciation of its currency to head off the threat of deflation, which runs contrary to its goal of price stability.

“Switzerland has always been treated as a special case when it comes to exchange-rate policy and even the U.S. Treasury has conceded in the past that Switzerland’s economic situation is 'distinctive' and that its monetary policy options are limited by its small stock of domestic assets,” said David Oxley, a senior European economist at Capital Economics, ahead of the report.

Latest data shows the SNB has dialed back on its interventionist approach. Despite the interventions, the franc is considered among the most over-valued major currencies in the world, according to various trade-weighted indexes.

The Swiss franc jumped to a five-year high versus the U.S. dollar after the report was released. Analysts said it could, on balance, cause the Swiss franc to be more attractive.

Greg Anderson, global head of foreign exchange strategy at BMO Capital Markets, said that over the medium term "it's probably likely to lead to Swiss appreciation because they'll probably feel under the gun as a result of this finding and less likely and willing to intervene to stifle franc strength."

Switzerland and Vietnam were the first to get the tag since China in 2019, at the height of U.S.-China trade tensions. That tag was removed in January as Washington and Beijing signed a trade agreement, citing a rebound in the yuan.

The SNB, which is to give its latest monetary policy decision on Thursday, said on Wednesday that it would not alter its monetary policy and remained willing to act aggressively on forex markets.

The SNB's readiness to intervene in currency markets remains central to its approach under Chairman Thomas Jordan.

SNB officials have long tried to explain their situation to Washington, noting that the franc rises because of global pressures. As a small, open economy, Switzerland can do little about that.

They will be hoping for a more sympathetic hearing under the incoming administration of President-elect Joe Biden.

"Switzerland being named as a currency manipulator by the U.S. Treasury will not gather the same market attention under the new Biden administration as compared to a Trump one," said Kaspar Hense, a portfolio manager at BlueBay Asset Management in London, ahead of the report.

Michael Brown, senior analyst at payments firm Caxton, London, agreed, highlighting the upcoming changes to the U.S. administration and the SNB seeming set in its ways.

That confidence is also reflected in the currency markets.

But medium term, currency derivative markets appear to be neutral about its prospects. Risk reversals, which show the ratio of calls to puts on the franc, show bets on further franc gains over three to six months broadly subdued.

BBH's Thin said any decision under the current U.S. administration may not matter. The new Treasury secretary "can come in and say ‘I don’t even believe in this,'” he said.