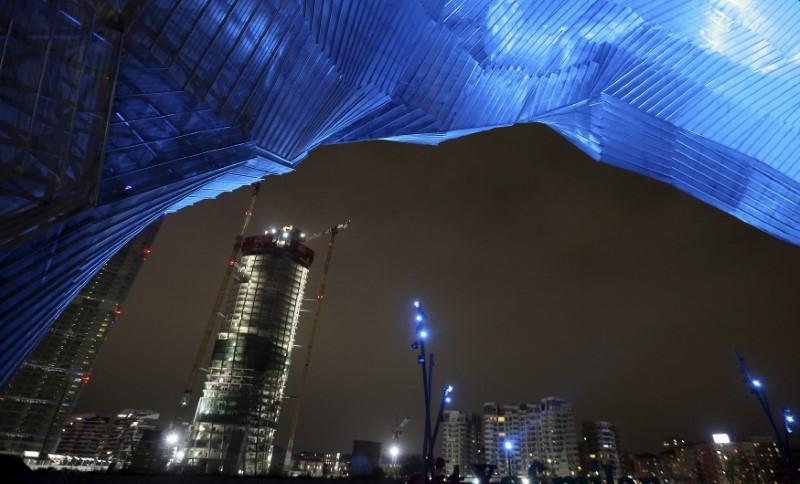 Renewed doubts over the single currency have chilled Italy's bond markets and reawakened the spectre of capital flight that shook Italian banks during the 2011-2012 sovereign crisis.

As a result, Italy's lenders have lost more than a fifth of their market value in just two weeks, tracking a fall in its bonds as an anti-establishment coalition sought, and failed, to form a government.

Before the political storm, Italy's banks had been outperforming euro zone rivals after reducing a bad loan burden that had threatened to cripple them.

And encouraged by Italy's economic upturn, hedge funds had even piled into the country's mid-tier lenders, betting on them as the last European recovery play.

But the prospect of snap elections after Italy's president on Sunday vetoed the coalition's eurosceptic economy minister has deepened a sell-off on fears of a de facto referendum on the euro and a further boost to anti-establishment parties.

"Risks perceived by investors have risen sharply and that is why they are knocking down the value of Italian banks, which even before the latest turmoil traded below their book values," said Andrea Resti, a professor at Milan's Bocconi University and an adviser on banking supervision to the European Parliament.

Rome's turmoil could also lift returns demanded by buyers of the bad loans banks are desperately striving to rid themselves of, stalling sales and forcing them to offer bigger discounts.

The Bank of Italy forecast on Tuesday 65 billion euros in sales of impaired bank loans this year and urged lenders to press ahead with cutting soured debt.

Despite a 75 billion euro drop from their post-recession peak of 360 billion euros, problem loans in Italy still account for around 14 percent of total bank lending.

That is twice the level of neighbouring Spain where the clean-up process has been much faster thanks to European Union aid, solid economic growth and a rebound in real estate prices.

Claudio Scardovi a managing director at Alix Partners said a lagging property rebound was still likely to draw investors to Italy in the face of real estate bubbles in Britain, the Nordics and to some degree in France.

Italy's real estate market has improved only in large cities such as Milan and Rome, and tourist areas and Francesco Castelli, head of fixed income at Banor Capital, said a continued and more uniform economic expansion was key for the rebound to take a wider grip.

"A property investment has an at least five-year horizon: just as the economy was growing again there are doubts about its mid-term prospects," Castelli said.

Mid-sized lenders, such as Banco BPM, UBI Banca and BPER Banca, are seen as more vulnerable to the turmoil because they lag big players like Intesa Sanpaolo and UniCredit in cutting bad loans.

Italy's 10th-largest bank Credito Valtellinese has been among the worst hit, even though just ahead of the March election it managed to raise eight times its market value in a share sale and gain 35 percent in value in its aftermath.

Shares in Creval, which has one of the highest sovereign exposures relative to its capital and a high bad loan burden, are 11 percent below the 0.10 euros at which it sold new shares.

Analysts warn that smaller Italian lenders are also the most at risk from rising financing costs. Wholesale funding markets have effectively shut down for Italian banks and traders say they will take a long while to reopen.

Italy's strongest bank Intesa SanPaolo placed a 10-year bond after the election at 77 basis points over the swap rate. This now trades with a 200 basis point spread, showing how conditions have worsened.

Although tight funding markets are not an immediate concern because most banks are awash with liquidity, they do raise a question mark over plans by state-owned Monte dei Paschi di Siena and smaller rival Banca Carige to rebuild their Tier 2 capital buffers with hybrid debt.

Carige CEO Paolo Fiorentino said on Tuesday that political risks had paralysed markets when asked about the bank's plan to issue a subordinated bond, a spokeswoman for the bank said.