By Ann Saphir (Reuters) - U.S. President-elect Joe Biden's proposal to pour $1.9 trillion into a hobbled economy could lay the foundation for a surge in jobs and spending that many economists say is needed to avoid long-term damage from a record-breaking pandemic recession. Analysts had already begun marking up their forecasts for economic growth this year after last week's elections in Georgia delivered control of both houses of Congress to Democrats. 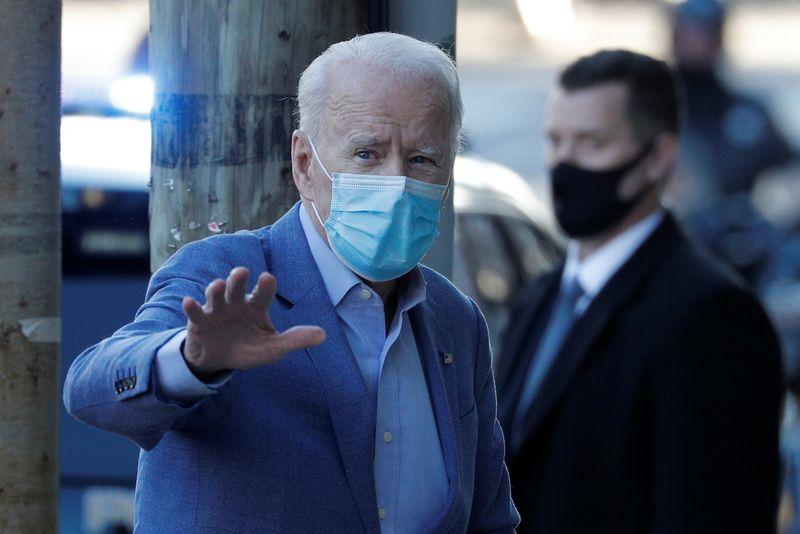 (Reuters) - U.S. President-elect Joe Biden's proposal to pour $1.9 trillion into a hobbled economy could lay the foundation for a surge in jobs and spending that many economists say is needed to avoid long-term damage from a record-breaking pandemic recession.

Analysts had already begun marking up their forecasts for economic growth this year after last week's elections in Georgia delivered control of both houses of Congress to Democrats.

Many, though, had penciled in smaller packages, more along the lines of the $892 billion stimulus passed in December.

Spending big on vaccine rollout, testing, and to shore up state and local governments on the frontlines of those efforts could help bring a swifter end to the country's healthcare crisis, which remains at the root of the economic crisis.

The incoming Democratic administration's proposed package provides targeted aid that economists say delivers the most effective economic boost, including an increase to the current extra weekly benefit to the unemployed, to $400 from $300.

It would also direct $170 billion toward reopening schools, the closure of which in many parts of the country has forced millions of workers, particularly women, to leave their jobs.

And it would put an extra $1,400 into the hands of most Americans - money that can be spent on rent or food for those who need it, or saved for a splurge on travel or dining out later in the year once wider vaccine distribution allows everyday life to get back closer to normal.

The new spending comes at a critical time for the world's largest economy. A winter resurgence of COVID-19 sent a partially recovered labor market into reverse last month as employers shed 140,000 jobs, especially low-income positions in restaurants, bars and other high-touch service industries.

All told the new package, which must still be voted on by Congress, would bring to $5.2 trillion the total fiscal stimulus delivered to the U.S. economy since the crisis began, equivalent to about a quarter of U.S. annual economic output.

That is enough of a boost for the economy to recoup all its decline from the COVID-19 recession by the third quarter of this year, Moody's economist Ryan Sweet estimates. But, he adds, "the recovery in the labor market will take longer."

The Biden plan will be welcomed at the Federal Reserve, where some officials had been concerned late last year about a diminishing fiscal response to the crisis. In his final days as president, Republican Donald Trump has devoted most of his energy to a failed effort to contest the results of the November election and had not engaged extensively on the smaller relief package that passed just before year end.

Earlier Thursday Fed Chair Jerome Powell noted that early and forceful government spending had helped save the economy from a much more dire fate.

And it was clear that the Fed would not respond to additional government spending as it did to the tax cuts under Trump, by slowly tightening monetary policy.

"Now is not the time to be talking about exit," Powell said, referring to the Fed's super-easy monetary policy that includes a massive bond-buying program and interest rates expected to stay near zero for years.

Back then, the economy was years into what would prove to be a record-long expansion, and with the labor market on the upswing, the extra stimulus was seen as potentially overheating the economy.

Not so now, with 10.7 million and rising out of work and an unemployment rate of 6.7%, nearly twice the pre-pandemic level.

The Fed has pledged to keep interest rates at their current near-zero level until inflation reaches and is on track to exceed 2%, and the economy hits full employment.

The massive added stimulus in the face of a quiescent Fed raises the specter for some that an economic boom later this year could push up prices uncomfortably or supercharge asset prices.

"I don't know that we completely understand all the impacts of shoving this much money into the economy when a significant portion of the economy is still constrained from the pandemic," said University of Oregon economics professor Tim Duy.