By Sarah Marsh and Nelson Acosta HAVANA (Reuters) - Cuba is deploying oxen to replace tractors, using wood instead of gas at many state bakeries and advising citizens to save electricity by making the most of daylight as it grapples with an acute fuel shortage amid U.S. 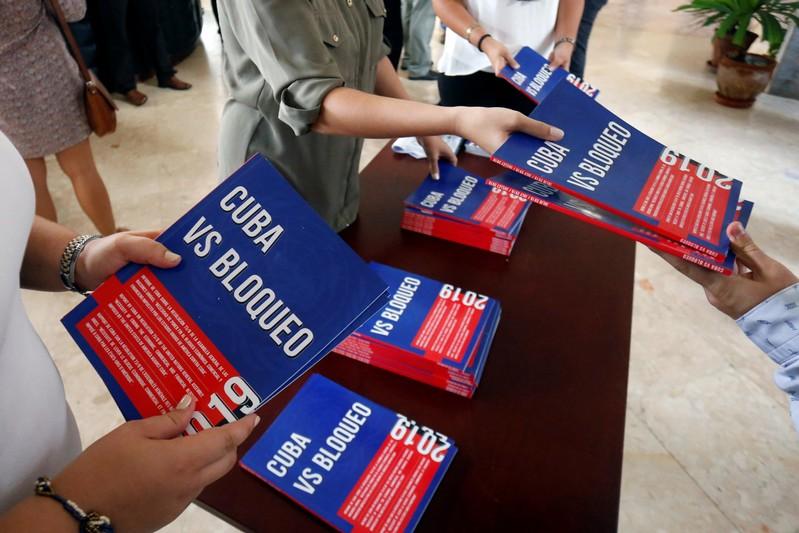 HAVANA (Reuters) - Cuba is deploying oxen to replace tractors, using wood instead of gas at many state bakeries and advising citizens to save electricity by making the most of daylight as it grapples with an acute fuel shortage amid U.S. sanctions.

The government says it is prioritizing what little fuel it has this month to sustain critical services such as hospitals and sectors such as tourism, which generate much-needed hard currency. In other areas, it is seeking alternatives or scaling down.

Some cement factories have decreased production, the construction minister told a state broadcaster this week. A large steel factory in Havana has stopped operating altogether, a worker there told Reuters.

Supervisors at two large hotel construction sites in Havana said building brigades from outside the city had been ordered to stay home because of a lack of fuel for transport and for operating machinery at full capacity. The sites were operating with one shift instead of two or three.

Other branches of the dominant state sector also told workers to stay home until further notice because of drastic cuts in public transport.

"If they don't need me right now, then I'd far rather not have to fight to catch a ride from a bus stop overflowing with people, especially given this heat," said Rosario, 32, who said her employer had sent her home with her full salary.

She declined to give her full name for fear of retribution.

Some state workplaces, universities and schools have simply cut hours to save electricity and provide some relief to public transport at peak commuting hours.

Cuba's Communist government last week announced that U.S. sanctions on oil shipments to the island meant it had not secured enough for September. [L2N263017]

Foreign Minister Bruno Rodriguez said on Friday the intensity and scale of the sanctions were "unprecedented," speaking at a news conference on the cost of the more than 50-year-old U.S. embargo ahead of a United Nations General Assembly vote on it.

For 27 years, the UNGA has called for an end to the embargo in the annual vote.

President Miguel Diaz-Canel has said the fuel shortage does not spell a return to the depths of the crisis Cuba suffered in the 1990s after the collapse of its former benefactor, the Soviet Union. Sufficient fuel shipments have been secured for next month.

Pavel Vidal, a former Cuban central bank economist who teaches at Colombia's Universidad Javeriana Cali, said a rare advantage of a centrally planned economy like Cuba's is that it enables the government to "orientate what little resources it has to the country's essential priorities" in a crisis.

Many Cubans fear the government is bracing for the economic situation to remain dire or worsen.

Diaz-Canel has repeatedly said Cuba could learn from the energy efficiency measures and should seek to keep some in place after the crisis is over.

"It's just not clear how things will get better given the uncertain circumstances," said Pablo Ramirez, 57, as he waited in line at a gas station in the hope of a fuel delivery.

Queues at gas stations in Havana snake for blocks, with some Cubans even sleeping in their cars overnight to have a chance of filling up.

Ramirez said his family needed their car to buy produce for their restaurant. "It's just very tiring and frustrating," he said.

The government has implemented austerity measures since 2016 because of a decline in cheap oil shipments from ally Venezuela and the Trump administration's tightening of U.S. sanctions. But previous measures have not been as severe.

"We have adopted measures like including around 4,000 yoke of oxen in the sugar cane work and production of food," Julio García Pérez, president of state-run sugar monopoly Azcuba, told state-run media.

Agriculture Minister Gustavo Rodriguez Rollero said on Wednesday that irrigation equipment was being turned off at times of peak electricity usage to reduce the burden on the power grid.

Diaz-Canel has said he hopes to avoid the long power outages that characterized the euphemistically named "special period" of the 1990s, but if they are required, they will be announced in advance.

Ordinary Cubans, meanwhile, are handling the shortages as best they can.

"I'm thinking of getting a bike," said schoolteacher Yanet Sanchez, 27, after waiting for three hours to get from central Havana to her western neighborhood by bus, a trip that should take just 20 minutes.