By Jeffrey Dastin and Akanksha Rana (Reuters) - Amazon.com Inc on Thursday forecast revenue and profit for the holiday quarter below expectations, as it faces fierce competition and rising costs from its plan to speed up delivery times globally. Shares fell 7%, as revenue growth for the company's lucrative cloud computing business also slowed down in the third quarter, missing analysts' estimates. 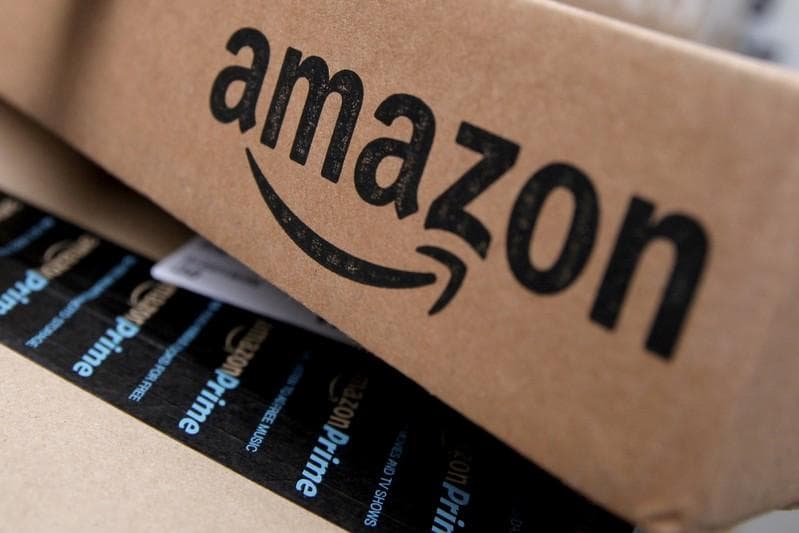 By Jeffrey Dastin and Akanksha Rana

The news underscores the big investment Amazon is making to cut delivery times to one day for its Prime loyalty members, a way to outmaneuver rivals such as Walmart Inc that have marketed two-day shipping without subscription fees.

Costs for that program will nearly double to $1.5 billion during the holiday season, from what Amazon spent on one-day delivery during the second quarter, the company's Chief Financial Officer Brian Olsavsky said on a call with reporters.

Expenses rose because the company has to move inventory closer to customers and beef up its last-mile transportation footprint, a big expense, to make the plan work, Olsavsky said. The company also is giving up the fees that customers used to pay for one-day delivery and is still learning what the long-term cost structure of one-day delivery will be, he said.

"By and away the biggest driver this time is the people that we’re adding for fulfillment and transportation roles,” he said.

Still, Amazon is betting that fast delivery will spark sales, a strategy that over years has helped it become the world's largest online retailer.

"Amazon will not necessarily be spooked by the increase in costs," said Neil Saunders, managing director of research firm GlobalData Retail. "Indeed, it sees the higher shipping expense as an investment in the Prime platform and as a way to retain the loyalty of its shoppers. As the top line results testify, there is some merit in this argument."

The company now has more than 100 million paid subscribers to Prime, who keep returning to take advantage of their membership and other perks like music and television streaming. Amazon acquired the U.S. grocer Whole Foods Market and has rolled out a popular lineup of voice-controlled Echo speakers to lure still more customers to transact with the Seattle-based company.

Still, weak holiday quarter guidance has added to worries that the ongoing U.S.-China trade spat may be hurting the U.S. retail industry. Holiday sales typically generate a majority of retailers' revenue and profit, and Amazon's forecast of $80.0 billion to $86.5 billion came short of $87.4 billion that analysts were expecting, according to IBES data from Refinitiv.

Olsavsky attributed 80 basis points of weakness to the timing of events outside the United States, which pushed sales into the third quarter. For instance, the company saw customers in Japan pre-order goods before a consumption tax went into effect on Oct. 1, he said.

Olsavsky also downplayed concerns about a slowdown in growth for one of the company's profit centers, Amazon Web Services. The unit, which handles data storage and computing operations for other enterprises, increased revenue 35% to $9.0 billion, the second quarter in a row in which its rate of growth was under 40%.

Olsavsky said it is difficult to predict the pace of enterprise technology sales cycles and that the company is in a great position to serve businesses, most of whose work is not yet in the cloud. Still, not all analysts saw a risk-free future.

"AWS has fueled Amazon’s margin expansion of late but the continued softening in growth rates will weigh on the company’s profits if they can’t reverse the trend," said eMarketer Analyst, Andrew Lipsman. "At the same time, the advertising and commerce sides of the business look very strong as investments in next-day shipping, though eating into the bottom line in the near term, are paying fast dividends on the top line,” he said.

Amazon's business model has drawn some scrutiny. Earlier this year, the European Commission launched an antitrust probe into whether Amazon's use of other merchants' data gave it an unfair advantage in retail. Some sellers have complained about Amazon's ability to create private-label versions of their products, a criticism that U.S. presidential hopeful Senator Elizabeth Warren has echoed.

Amazon also said it expects holiday-quarter operating income to be between $1.2 billion and $2.9 billion, while analysts were expecting $4.19 billion, according to research firm FactSet.

(Reporting by Akanksha Rana in Bengaluru and Jeffrey Dastin in San Francisco; Editing by Saumyadeb Chakrabarty and Lisa Shumaker)