By Dominique Vidalon and Matthieu Protard PARIS (Reuters) - Amazon has bowed to government pressure to postpone its 'Black Friday' discount shopping sales in France to help local shopkeepers struggling with a nationwide lockdown. The U.S. retail giant has seen sales soar globally as restrictions to prevent the spread of the coronavirus sent consumers online, making it difficult for some bricks-and-mortar shops to compete 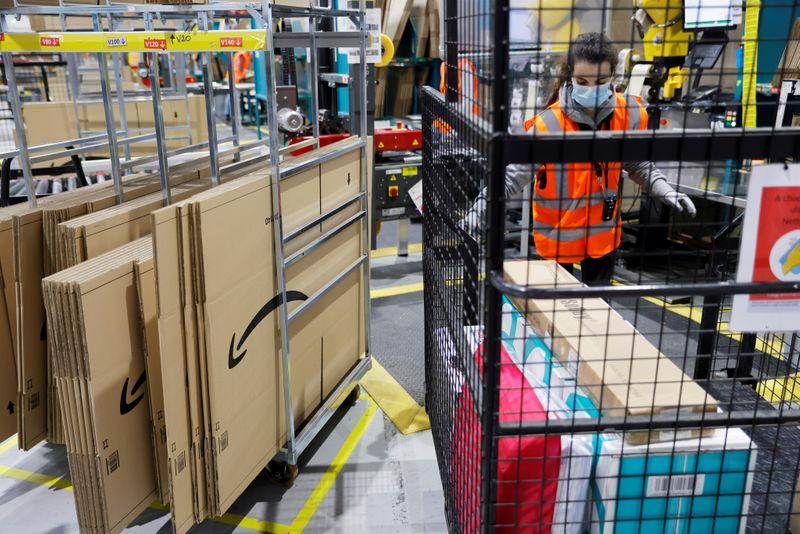 The U.S. retail giant has seen sales soar globally as restrictions to prevent the spread of the coronavirus sent consumers online, making it difficult for some bricks-and-mortar shops to compete.

To level the playing field, Finance Minister Bruno Le Maire this week called on supermarkets and online retailers to postpone Black Friday, which runs from Nov. 27 to Nov. 29, as shops selling non-essential goods would have to remain closed during lockdown.

Competition from Amazon first prompted European retailers to adopt the U.S. tradition of making Black Friday - the day after U.S. Thanksgiving - the kickoff to the holiday shopping season.

Amazon France Chief Executive Frederic Duval said on Thursday the company would push the event back to Dec. 4, joining other retailers such as European market leader Carrefour and France's Leclerc.

"We have decided to delay the date of Black Friday if this can help shopkeepers reopen before Dec. 1," Duval said on TF1 television on Thursday.

Amazon confirmed Duval's comments in an emailed statement, but did not respond to requests for further comment on Friday.

Online and traditional retailers unanimously agreed on Friday to push back Black Friday sales by a week on condition stores would be allowed to reopen by then, the Finance Ministry said after a meeting with sector representatives.

While helping to generate record profits, the coronavirus crisis has also triggered scrutiny of Amazon’s efforts to protect staff from the pandemic, particularly in France, where a lengthy battle over safety measures led to the temporary closure of warehouses.

Amazon’s ability to keep selling during the lockdown has also deepened frustration among opponents of the company in France who say it represents a U.S.-style consumer culture at odds with the country's long tradition of mom-and-pop neighborhood stores.

Some 30,000 people have signed an online petition to boycott Amazon, according to its organiser, lawmaker Mathieu Orphelin, who left President Emmanuel Macron's party last year to set up a more environmentally focused party.

"A lot of people use our name to get noticed, but Amazon makes up only 1% of retail in France," Duval said, when asked on France Info radio on Friday how to explain negative sentiment against his company.

President Emmanuel Macron has said France's second national lockdown, which started on Oct. 30, would last at least four weeks. Curbs include the closure of non-essential stores, restaurants and bars.

But with recent data showing France on track to rein in a surge in coronavirus infections, the government is under pressure from shops and businesses to ease restrictions at the end of November in time for the Christmas shopping season, when many retailers make the bulk of their annual turnover.

Eager to keep shoppers from crowding stores to swoop on potential discounts, the finance ministry said on Thursday that a one-week delay in Black Friday sales would help ensure shops reopen in France under maximum safety conditions.