By Tim Hepher and Philip Blenkinsop PARIS/BRUSSELS (Reuters) - Shares in Airbus and French luxury goods exporters fell on Monday as the European Union acknowledged it may face U.S. tariffs in a long-running dispute over aircraft subsidies, part of an escalating tit-for-tat trade row. The World Trade Organization has approved a U.S. 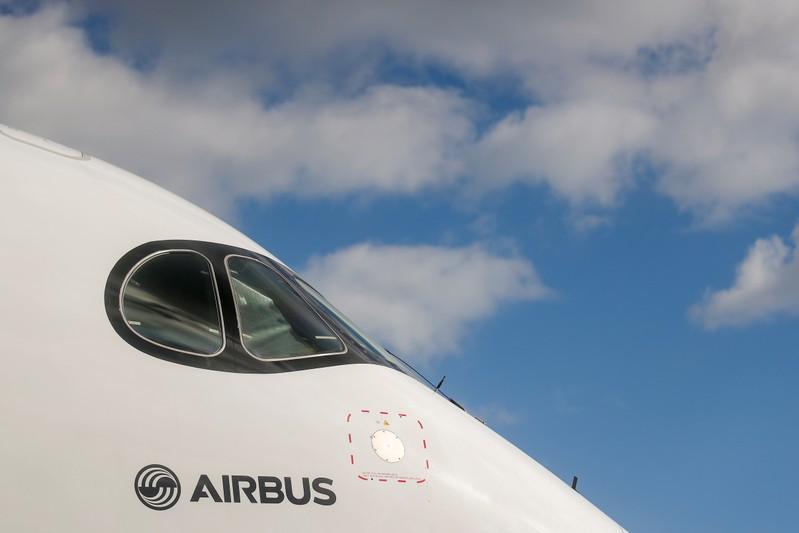 By Tim Hepher and Philip Blenkinsop

The World Trade Organization has approved a U.S. request to impose tariffs on European goods in the latest chapter of a dispute over aircraft subsidies that could lead to European reprisals, two people familiar with the case said.

The scope of the decision, which had been widely anticipated, is due to be announced in the week of Sept. 30.

The EU's trade chief said the United States was likely to impose tariffs "quite soon".

The WTO has found that both Airbus and its U.S. rival Boeing received billions of dollars of harmful subsidies in a pair of cases marking the world's largest ever corporate trade dispute.

The EU and United States are now drawing up potential tariffs after the Geneva body also found neither side had adhered fully to its findings. But Washington is first in line to turn this into actual tariffs because its case is running nine months ahead.

Washington has sought permission to impose tariffs up to 100% on European goods worth $11.2 billion a year. These include aircraft and aerospace parts from Airbus host nations - Britain, France, Germany and Spain - as well a range of goods including wine, cheese and luxury goods from across the EU.

Exports of Airbus commercial helicopters could also be hit.

The final amount will depend on WTO arbitrators who presented their findings internally last week.

Washington must then draw from a broader list of EU products with a trade value of $25 billion a year that it has tapped for possible inclusion in the final list of any punitive tariffs.

Airbus jets and parts are likely to be hit first, whatever the size of the approved countermeasures, trade sources said.

Shares in Airbus, which relies on a flow of parts to feed an assembly line in Alabama, and which also counts U.S. airlines among its major customers for aircraft assembled at its main plants in Europe, fell 3.2%.

Airbus Chief Executive Guillaume Faury said in an interview published on Monday that the planemaker would not see a big impact in 2019 but could not rule out disruption.

The potential exchange of tariffs stems from complaints filed well before the current spate of global trade tensions, but is coming to a head just as global markets are taking fright at trade friction dominated by a U.S.-China trade war.

On the transatlantic front, tensions have been brewing since the U.S. imposed steel and aluminium tariffs last year, while the United States has also threatened to impose car tariffs.

Both sides in the aircraft dispute have attempted to deflect blame for any further escalation by accusing the other of ignoring attempts to head off a trade war through negotiation.

U.S. officials later said the EU had failed to show any interest in talks.

The EU, however, said on Monday it was Washington that stood in the way of a negotiated settlement.

Trade chief Cecilia Malmstrom said the EU had asked the United States in July to hold off trade sanctions and seek an agreement.

"Our view is that we have enough tariffs in the world as it is ... The U.S. president likes to make deals so we have offered to try to make a deal to find a negotiated solution," EU Trade Commissioner Malmstrom told a briefing.

"So far, unfortunately, the U.S. has not said that they are willing to negotiate, at least not until they have imposed their tariffs, which they are likely to do quite soon," she said. The EU trade chief said any EU-U.S. agreement could serve as a template for others to follow to create a level playing field. "We also know other big players in the world, such as Russia and China but also others, are also subsidising their civil aircraft industry," she said.

Western officials who have tried to explore a compromise in the past believe any new funding agreement must set an example for China, whose own rapid aerospace growth with state backing is viewed as a worrying threat by the two Western plane giants.