Airbus board meets in China amid jet sale hopes

By Tim Hepher PARIS (Reuters) - The board of Airbus is holding an unusual meeting in China as the European planemaker implements plans to increase local assembly of jets - a hike that could help unlock talks over a long-delayed deal to sell up to 180 jets, industry sources said. The board of Europe's largest aerospace group travelled to the world's fastest-growing aviation market for an annual off-site 'strategy' session coinciding with the 10th anniversary of the inauguration of Airbus jet assembly at Tianjin near Beijing. 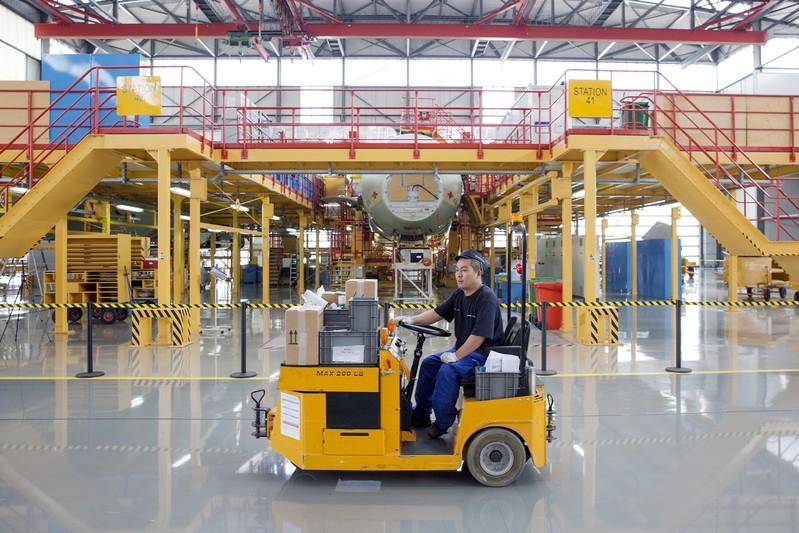 PARIS (Reuters) - The board of Airbus is holding an unusual meeting in China as the European planemaker implements plans to increase local assembly of jets - a hike that could help unlock talks over a long-delayed deal to sell up to 180 jets, industry sources said.

The board of Europe's largest aerospace group travelled to the world's fastest-growing aviation market for an annual off-site "strategy" session coinciding with the 10th anniversary of the inauguration of Airbus jet assembly at Tianjin near Beijing.

Despite efforts to prevent electronic eavesdropping on discussions held on Chinese soil, the board is expected to stay well clear of sensitive subjects. Besides building jets, Airbus is a major European defence contractor, responsible for the production of France's nuclear missiles and German fighters.

"They are not going to talk about everything. It will be a general discussion," an industry source told Reuters.

The head of the Airbus planemaking division, Guillaume Faury, seen as a possible successor to Chief Executive Tom Enders whose mandate expires next year, is also in China for the off-site meeting, a person familiar with the matter said.

A spokesman for Airbus said it would not comment on the movements of its senior management or on details of the meeting, said to be taking place in a secured private location.

Booming Chinese air travel is a major driver of record Western production of passenger jets, while China is preparing to showcase its own aerospace industry at an air show next month.

Airbus earlier this year announced plans to increase the number of its best-selling A320-family medium-haul jets assembled at Tianjin from 4 a month to 6 a month by 2020, representing about a tenth of total A320 output.

A year ago it added a completion plant for A330 aircraft in Tianjin, hoping for a boost for its slow-selling A330neo model which gained European safety certification on Wednesday.

However plans for a landmark sale of up to 180 jets during a visit to China by French President Emmanuel Macron in January fell through shortly after a perceived gaffe by two European envoys over China's sensitive historical relationship with Japan.

In June, industry sources said the two sides were once again in jet sale talks bolstered by the production increase and at the Farnborough Airshow a month later, Chinese interests were said to be behind a number of anonymous deals.

Among pending deals, Airbus is urgently trying to close what industry sources described as a provisional $9 billion deal with Chinese lessor ICBC for 80 jets, partially announced in Farnborough without the buyer's name being disclosed.

"We are always in talks with our customers, but we only communicate when deals are ready," the Airbus spokesman said.

Bloomberg News reported earlier that the two sides were close to an $18 billion deal.