By Lucia Mutikani WASHINGTON (Reuters) - U.S. retail sales rebounded sharply in January after households received additional pandemic relief money from the government, suggesting a pick-up in economic activity after being restrained by a fresh wave of COVID-19 infections late last year. The largest gain in retail sales in seven months reported by the Commerce Department on Wednesday was across the board, and ended three straight monthly decreases 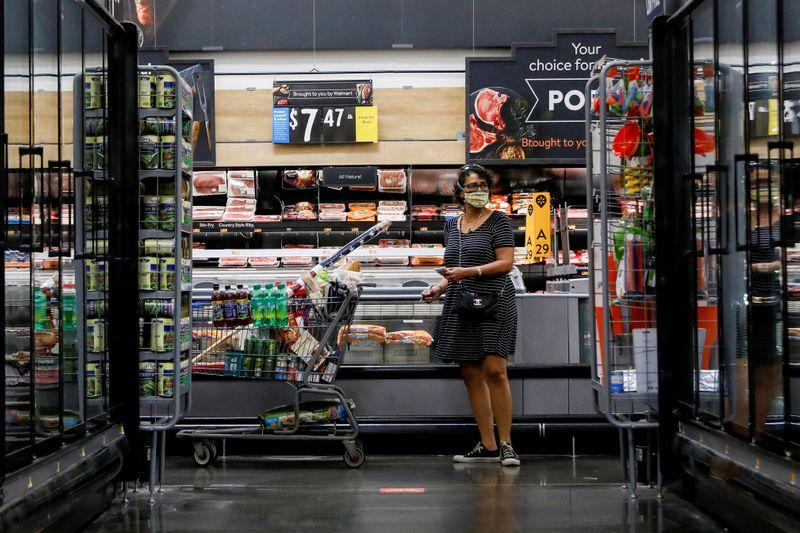 The largest gain in retail sales in seven months reported by the Commerce Department on Wednesday was across the board, and ended three straight monthly decreases. The acceleration in activity at the start of 2021 was evident in other data showing strong growth in production and prices at factories last month.

Still, the solid economic data did not argue against President Joe Biden's $1.9 trillion recovery plan. Millions of Americans remain unemployed. Though COVID-19 infection and hospitalization rates have declined, new strains of the virus pose a risk to the economy fully reopening.

"The economy picked up steam in January and inflation came along for the ride," said Joel Naroff, chief economist at Naroff Economics in Holland, Pennsylvania. "Since President Biden is intent on getting a major bill through, look for that to happen and for government money to continue to get into the hands of households and businesses."

Retail sales surged by a seasonally adjusted 5.3% last month after decreasing 1.0% in December. Economists polled by Reuters had forecast sales increasing 1.1% in January.

Retail sales increased 7.4% from a year ago. Sales last month were led by motor vehicles, with receipts at auto dealerships accelerating 3.1%. Sales at clothing stores soared 5.0%. Consumers also stepped up spending at restaurants and bars, boosting receipts 6.9%. Still, sales at restaurants and bars were down 16.6% compared to January 2020.

Receipts at electronics and appliance stores powered ahead 14.7% and sales at furniture stores surged 12.0%. There were also hefty increases in sales at sporting goods, hobby, musical instrument and book stores.

Receipts at food and beverage stores rose solidly, as did those at building material stores. Online retail sales jumped 11.0% after dropping 7.3% in December.

The government approved another coronavirus rescue package worth nearly $900 billion at the end of December, which included $600 checks to mostly low-income and some middle-income Americans. The bulk of the money was disbursed in early January, which supported discretionary spending last month.

The package also extended a government-funded weekly unemployment subsidy as well as benefits for millions of people who do not qualify for state unemployment programs as well as those who have exhausted their six months of eligibility. These benefits are set to expire in mid-March.

As with the previous stimulus checks, consumers saved a big chunk of the latest payouts.

"Less than a quarter of the stimulus check funds were quickly spent at retailers," said Michael Feroli, chief U.S. economist at JPMorgan in New York. "We estimate that the personal saving rate moved up to around 20% last month."

Some of the sharp rebound was technical. The model used by the government to strip out seasonal fluctuations from the data typically anticipates a bigger post-holiday season drop in retail sales in January. The drop in unadjusted sales was the smallest since 1992, contributing to the big rise in the seasonally adjusted retail sales.

U.S. stocks fell. The dollar rose against a basket of currencies. U.S. Treasury prices were higher.

Further gains in sales are expected in the months ahead. The Biden administration's recovery plan, under consideration in the U.S. Congress, will include an additional $1,400 check to households. The distribution of vaccines is improving, which should allow more restaurants and other consumer-facing businesses to reopen in the spring.

Americans are sitting on $2.38 trillion in savings, which is expected could unleash pent-up demand for services like air travel and hotel accommodation, hardest hit by the pandemic.

In a separate report on Wednesday, the Federal Reserve said manufacturing production rose 1.0% last month after gaining 0.9% in December. The ninth straight monthly advance in factory production was despite a shortage of semiconductors weighing on the output of motor vehicles.

"The blow-out retail sales report puts in place some initial strong scaffolding for growth in the first quarter of 2021," said Brian Bethune, an economics professor at Boston College. "Underlying growth momentum is building as the third seasonal wave of the pandemic has moved over the hump, and the vaccination program is being accelerated."

Firming economic activity is starting to boost inflation. In a third report, the Labor Department said its producer price index for final demand jumped 1.3% last month, the biggest gain since December 2009. That followed a 0.3% rise in December.

Inflation is being watched amid concerns from some quarters that Biden's recovery plan could cause the economy to overheat, though much will depend on the labor market.

"We do not yet have a tight labor market," said Chris Low, chief economist at FHN Financial in New York. "Not even close."