Vedanta is the third company to announce a chip plant location in India after international consortium ISMC and Singapore-based IGSS Ventures, which are setting up in Karnataka and Tamil Nadu, respectively. PTI

The two companies also signed a memorandum of understanding with the Gujarat government to set up the unit in the state. The MoU was signed in the presence of Minister for Railways, Communications, Electronics & Information Technology, Ashwini Vaishnaw, at a function held in Gandhinagar.

History gets made! 🇮🇳 Happy to announce that the new Vedanta-Foxconn semiconductor plant will be set up in #Gujarat. Vedanta’s landmark investment of ₹1.54 lakh crores will help make India’s #Atmanirbhar Silicon Valley a reality. (1/4)

Shortly after signing the MoU, Vedanta Resources founder and chairman Anil Agarwal said India’s own Silicon Valley is a step closer now. “#India will fulfil the digital needs of not just her people, but also those from across the seas. The journey from being a chip taker to a chip maker has officially begun…Jai Hind!”

We examine why this new plant is a reason to celebrate and how it will help the nation.

What are semiconductor chips?

These chips play a crucial part in the functioning of all modern electronics and information and communications technology products. In simple terms, they can be considered as basic building block parts of contemporary automobiles, household gadgets and essential medical devices such as ECG machines.

Eight per cent of all the chips used in the world are manufactured in Taiwan, followed by China and Japan.

As of now, semiconductor chips are not manufactured in India at present. 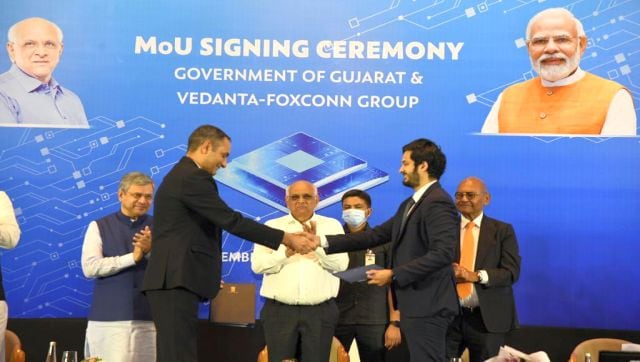 All about the new semiconductor plant

The Rs 1.54 lakh crore investment by Vedanta and Foxconn will be used to set up India’s first semiconductor production plant, a display fab unit, and a semiconductor assembling and testing unit.

According to officials, the plants will be set up on a 1, 000-acre land in Ahmedabad. Speaking on the deal, Vedanta chairma Anil Agarwal was quoted as telling news agency PTI that the plant would start production in two years.

Agarwal further added that the plant would generate one lakh jobs. “We are trying to ensure that production gets underway within two years. This isn’t just about one lakh jobs, we are transforming the nation. The country will enter (field of) semiconductors and glass. But I can’t even imagine what doors will this open once production begins.”

According to Gujarat Science and Technology Department Secretary Vijay Nehra the deal is the biggest ever corporate investment in the history of independent India.

This MoU is an important step accelerating India’s semi-conductor manufacturing ambitions. The investment of Rs 1.54 lakh crore will create a significant impact to boost economy and jobs. This will also create a huge ecosystem for ancillary industries and help our MSMEs. https://t.co/nrRbfKoetd

Politics over the plant

Following the announcement of the new semiconductor plant, the Opposition in Maharashtra slammed the Eknath Shinde-led government for the state “losing” out on the Rs 1.54 lakh crore venture.

Shiv Sena leader Aaditya Thackeray claimed that the former Chief Minister Uddhav Thackeray-led Maha Vikas Aghadi (MVA) government had brought and finalised the deal for the state. However, the Shinde-Fadnavis government let it go to Gujarat, which caused not only a loss of a $20 billion semiconductor project to the state but also 170 allied industries and about one lakh jobs, reports The Hindu.

It was almost decided that the plant will come up in Maharashtra, said Aaditya Thackeray. “Our MVA government had brought this to final stage. The current dispensation has lost the confidence of potential investors, hence such mega projects are not coming here,” he added.

State Nationalist Congress Party (NCP) president and former minister Jayant Patil said with the big-ticket project slipping away from the hands of Maharashtra, the state has lost an investment potential of more than Rs one lakh crore.

“Gujarat has once again taken away the morsel from Maharashtra’s mouth. With the Gujarat elections coming up, the BJP in Maharashtra seems busy in safeguarding the interests of Gujarat, NCP leader Patil said in a series of tweets.

Will chief minister and deputy chief minister (Devendra Fadnavis) apologise to the educated unemployed youth of the state for losing out on the project? he asked.

The industry is also wary about the decrease in demand from China market, due to two year long lull.<br />

Govt should use resources for faster growth, says Anil Agarwal

Vedanta's Anil Agarwal will give 75% of his wealth to charity

Forbes estimated that the 61-year-old Indian entrepreneur has a net worth of $3.5 billion.<br />